This new touring programme, which has now reached The Place, is made up of three very different pieces with one thing in common: they all exhibit the company’s trademark originality and spirit of adventure.

First comes Wild Thoughts (pictured top) by the Italian choreographer Andrea Costanzo Martini. And it is pretty wild, too. Danced against a bright white background, it starts sedately enough, with three women in succession performing almost identical sequences of classical steps, occasionally distorted when one body part unexpectedly sticks out.

Gradually more dancers join in, and soon they launch into a shouted litany of body parts, gesturing with split-second synchronisation. With Rike Zöllner’s colourful costumes and a sound score that ranges from electronic hum to zany music, its mood is celebratory and its joy contagious.

After a pause the mood alters radically, and with Anthony Matsena’s Codi NDC Wales brings us a work of at times almost unbearable intensity. Zimbabwe-born Matsena has lived in Wales since the age of 13, and Codi (the word means to rise up in an emotional and spiritual way) is his homage to the coal-mining communities of his adopted country.

The stage is dark, its only light sources a battery of orange and white lights upstage and the miners' lamps on the brows of the six dancers, clad in dark orange work overalls. Plaudits to lighting designer Ryan Joseph Stafford, who effectively recreated the suffocating atmosphere of deep-shaft coal mines.

Combined with Matsena’s arrangement of bodies this gives the work moments of painterly beauty, reminiscent of past masters such as Caravaggio. 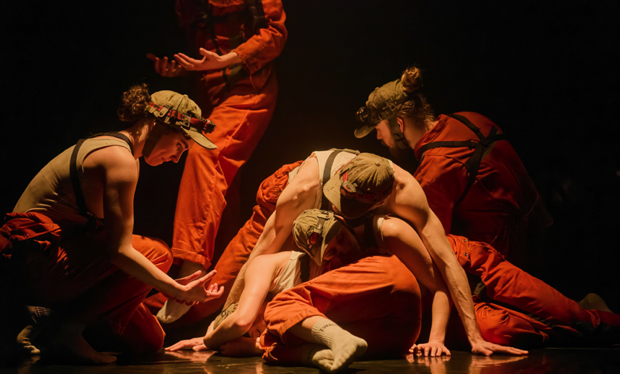 NDC Wales, Codi. Photo: Mark Douet
Matsena’s choreography draws inspiration from African dances, with sequences of stomping and fast shuffling. Everything is infused with tension that comes to a head when a mining disaster leads to loss of life.

The work ends in an upbeat, defiant mood, with the dancers holding aloft a red flag and their fists. They will not be defeated.

After that you definitely need an interval, and you then return to the theatre to yet another radical change of mood. 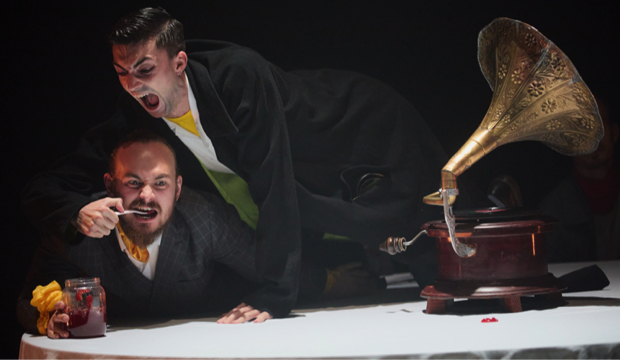 NDC Wales, Ludo. Photo: Mark Douet
Caroline Finn’s Ludo is billed as a nostalgic look at the world of play. Its play, though, is often dark and anarchic, relying on distorted references. Downstage a girl listens to a scratchy wind-up gramophone, while at the back two people engage in a prolonged and bizarre contest over a spoonful of jam.

Later there will be references to childhood games like hopscotch; to children’s ability to reimagine things, such as when the seven dancers build a carousel out of park benches.

Ludo exhibits some of Finn’s recurring motifs: a large table is present; the score is a collage of wildly different pieces of music ranging from Schubert through Vagabond Opera’s Chaplin Nonsense Song to a gentle Brazilian tune.

One Another is programme that proclaims loud and clear that NDC Wales is back, as vital and creative as ever.