Acosta Danza's 100% Cuban, currently at Sadler's Wells, showcases the immense talents of its dancers in a less than satisfactory programme

Founded in 2016 in his native Havana, Cuba, by the ballet superstar Carlos Acosta, Acosta Danza is meant to showcase Cuban artists. There is no doubting the talent and commitment of its 14 dancers, nor the talent of Cuba’s deservedly famous musicians. When it comes to choreographers, though, things are not so good.

100% Cuban consists of five pieces, where the work of three Cuban choreographers contrasts strongly with that of the Swede Pontus Lidberg, choreographer of Paysage, soudain, la nuit, and the Spaniard Maria Rovira, creator of Impronta.

By far the best work in the programme, Paysage, soudain, la nuit (pictured top) is a delightful celebration of Cuban youth, and the dancers do it full justice. It’s danced against an installation by the Cuban artist Elizabeth Cerviño – a wheatfield running along the back of the stage – with skilful lighting by Patrik Bogårdh that moves subtly from twilight to dawn.

It’s a joyful piece that makes the most of space, its fluid perpetual movement creating ephemeral patterns, the whole thing an elegy to youth that is immensely pleasurable to watch. 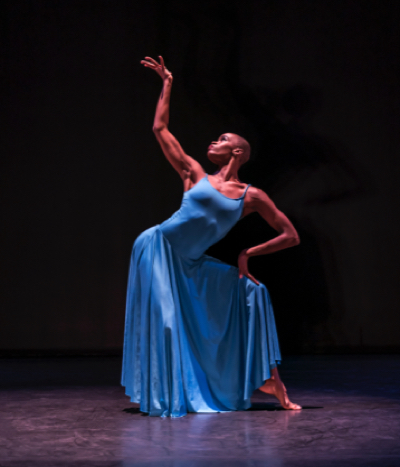 Impronta, dancer Zeleidy Crespo. Photo: Johan Persson
Tall and long-limbed, Crespo cuts a striking figure with her shaved head and deeply expressive body. Dressed in satiny turquoise, she infuses this seven-minute solo inspired by the movements of Afro-Cuban folklore with a mix of power and grace. It’s unlikely anybody else could dance it.

These two works are sandwiched between three pieces by Cuban choreographers: Liberto, signed by the company dancer and budding choreographer Raúl Reinoso, Hybrid by Norge Cedeño and De Punta a Cabo by Alexis Fernández (Maca), which closes the evening.

Liberto (which translates as ‘freed’) is a short piece for two dancers set to a score by Pepe Gavilondo and performed on opening night by Zeleidy Crespo and Mario Sergio Elias. Centred on a runaway slave, it draws on diverse influences, from ancestral Yoruba culture to contemporary dance. Some of its intentions come across, others are too obscure.

Hybrid is an energetic, red-tinted work for five couples, more interesting perhaps for its coded messages than for its choreography, which attempts to fuse folk movement with contemporary dance, often clumsily. It seems to be about the defiance of urban youth. 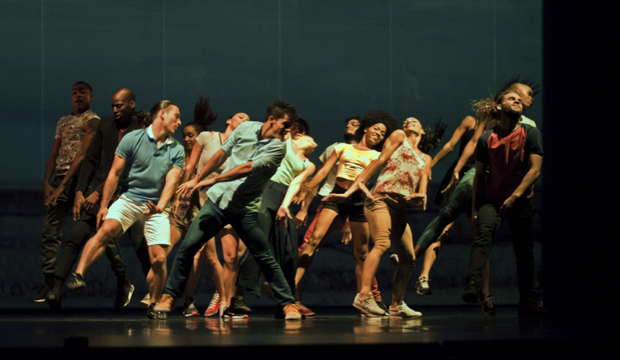 De Punta a Cabo. Photo: Yuris Norido
Finally De Punta a Cabo is set against a projection of Havana’s dazzlingly beautiful waterfront, the Malecón. A piece for the whole company, it purports to encompass all the contradictions of current Cuban society, and although the dancers give it their all, the combination of contemporary dance, pure en pointe ballet and street dance is awkward rather than eloquent.

Quoted in a programme note, Carlos Acosta says he hopes that the audience leave feeling 'uplifted, perhaps happier in themselves.’ This audience member, though, left feeling strangely dispirited. Those dancers deserve so much better.