Netflix's latest film, To The Bone offers a misguided portrayal of an anorexic 20 year old. But it isn't all bad...

The issues are these: do films about anorexia encourage eating disorders in young women? If so, should we make them? Is it possible make a film about a disorder that presents itself so visibly on women’s bodies – with white shining collarbones, sunken eye-sockets, and racks of ribs on display – without encouraging a perverse voyeuristic experience? Do we secretly take pleasure in watching deathly-thin, self destructive women? Is this why people will stream To The Bone?

It was always going to be nearly impossible for To The Bone to avoid criticism. The film had to steer clear of all anorexia / mental sickness tropes, refrain from being patronising or of glamourising the disease. It had to successfully humanise the character without simplifying the disorder, and show the day-to-day experience of living with anorexia but without fetishising the routines or providing a ‘how to’ guide.

To The Bone makes too many of these mistakes. It has already managed to insult plenty of mental health suffers, even spawning a petition online demanding that Netflix pulls the show before it airs. But, unlike the startlingly tone-deaf teen suicide drama, 13 Reasons Why, which could double as a 13 hour long advert on the benefits of taking your own life, To The Bone has some redeeming features. It might even be worth watching.

Lilly Collins plays Ellen, a talented young artist and rebellious college dropout, who engages in underage drinking, consumes cigarettes instead of food, and has been – for some time – loosing a battle against anorexia. Ellen tracks the process of her shrinking arms by seeing how close thumb and finger get to touching when wrapped around her biceps.

As part of the recovery process, Ellen is taken out of her unhappy home and is admitted into a community treatment facility under the care of highly respected Dr William Beckham. He is considered something of a miracle worker – a calm, sensible man and an unorthodox genius – who can cure groups of hysterical, self-harming women. His reputation for excellence and powerful sexual attraction is often discussed, but utterly unconvincing, as Keanu Reeves plays the doctor without a hint of charisma or charm. 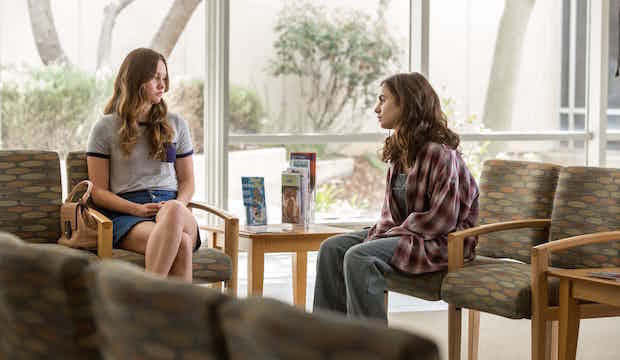 Casual sexism is one of the major pit-falls of the film. The self proclaimed brilliant doctor is joined in his mission to save the women from themselves by another young man in the facility. Luke is the only boy, and also the only patient visibly on track to getting better. He and Dr Beckham are also the only two people with a modicum of empathy. And so, despite the fact that anorexics don't have a libido and that Ellen herself hasn't had a period (and, likely, any sex-drive) for as long as she can remember, she begins a relationship with Luke. Which is improbable and frustrating.

In defence of the film, director Marti Noxon (who based the film on her own struggle with anorexia) attempts to depict the nature of anorexia. Critics say the show fails to understand that the disease is not an obsession with aesthetics, but a self-mutalation tactic designed to distract oneself from mental turbulence. Actually, the film does try to address this. 'There's no such thing as thin enough', says a nurse as she explains in group therapy that: 'starving yourself can make you feel euphoric, like a drug addict, or an alcoholic.'

Lily Collins wasn't the right person to carry the message that eating disorders have nothing to do with beauty. The British-American actress and model, who herself once struggled with anorexia, also built an empire on the back of her etherial and other-wordly glamour. You might as well ask Keith Richards to star in a film about how uncool drug addiction is. And, if you are going to use a supermodel to highlight how unsexy eating disorders are, maybe don't ring her eyes in 'come hither' black eye-liner and put a fag in her mouth – it's a fragile woman cliché that could have been avoided.

Despite all this, the film has got us thinking. To The Bone at least attempts to show us that anorexia comes from a place of hopelessness and that everyone can suffer from it. When was the last time you saw a film that talked about anorexia in both women, but in men? Films that grotesquely misrepresent their subjects shouldn't be made at all, but To The Bone isn't one of those films. In this case, it's better to spark up conversation about anorexia, than leave it as a taboo.