The Street Cat Named Bob movie is sweet but not sentimental, an almost-Christmas film that's not too heartwarming

1 CW reader is interested
A Street Cat Named Bob film review 3 A Street Cat Named Bob film review Matthew Robinson
Bob plays himself. Well, some of the time: there are a few Bob-lookalikes sharing thespian duties with the original, but do you think that Michael Fassbender does all his own stunts? And the real Bob is an actual hero. He can cameo in his own movie if he wants to.

Actually, A Street Cat Named Bob withholds from this kind of anthropomorphism. Which is not to say that Bob’s not cute, but that the film admirably restrains from tapping into the zany YouTube-worthy Grumpy Cat audience. Bob’s definitely cute, but his cuteness isn’t the focus of the film. It’s just an entry point to a sweet-yet-unsentimental story about the human need for company and purpose.

A Street Cat Named Bob is based on the memoir by James Bowen, a busker and former heroin-addict who found the Bob when he was living in supported housing in Tottenham. The film alludes to Bowen’s decade of living rough and high, but understandably begins just before Bob, collarless and hungry, climbs in through the window and begins eating the cereal that Bowen can barely afford. In return, Bowen (Luke Treadaway, likeable) gains a companion.

The exchange characterises Bob and Bowen’s whole relationship. This might sound mercenary, but it won’t surprise anyone who actually owns a cat, and it expresses a simple but profound truth. Bowen spends all his money – literally all of it – on vet treatment for Bob, and misses an important follow-up meeting with support worker Val (an excellently tough Joanne Froggatt), because he finally has something worth living for other than himself. Bowen can only ignore the parasitical drug-dealers on his estate when he has someone else’s hunger to consider. Narcotics Anonymous is in accord with AA on this one: submission to a ‘higher power’ is a requirement of recovery. Bob isn’t a Lolcat – he’s a Higher Power! 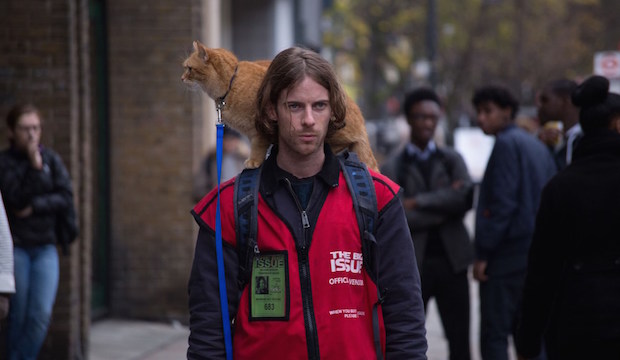 Maybe that's overselling A Street Cat Named Bob. It’s still pretty cozy, with its fair share of Bob knocking over breakables or looking daggers at mice, and Ruda Gedminta’s kooky vegan-next-door is annoying. And it glaringly omits the single greatest fact about Bob: that he was named after a Twin Peaks character who is, according to Wikipedia, ‘a demonic entity who feeds on fear and pleasure… [who] possesses human beings and then commits acts of rape and murder in order to feast upon his victims.’

But while London looks picture-perfect in a way that’s clearly supposed to go down a treat with American audiences, it also doesn’t ignore the fact that there’s extreme poverty even at the centre of the mega-wealthy capital. Considering how smug and sanitised the film could have been, maybe with cameos from ‘national treasures’ (Joanna Lumley as a TFL worker; Stephen Fry as himself), the film is a triumph, and compared to Kids in Love it’s practically I, Daniel Blake.