14 years after the original comes the sequel to the finest animation film from the Pixar studios: Incredibles 2 arrives with new villains and a fresh sense of relevance

1 CW reader is interested
The Incredibles 2 film review 4 The Incredibles 2 film review Daniel Lewis
Since 1999, it seems like almost everything director and animator Brad Bird touches turns to gold. He’s pulled off a string of easily lovable animations – cult classic The Iron Giant, outright classic Ratatouille, ageless classic The Incredibles – as well as Mission: Impossible – Ghost Protocol, the fourth, highest-grossing and most critically acclaimed (no mean feat) instalment of the franchise. Incredibles 2, in comparison to all these previous offerings, feels a bit like fool’s gold. It looks like the real thing, feels like the real thing but, in reality, isn’t quite like the genuine article.

One way the film fools is by casting itself in pretty much exactly the same mould. 'Supers' are still outlawed for their crime fighting’s significant collateral damage – the opening attempt to halt a bank robbery leaves Municiberg (read: futurist San Francisco) in rubble – and, now, cut off from the Superhero Relocation Program’s financial support, the Incredibles (a.k.a the Parrs) have to settle for the normal, 9-to-5 life. 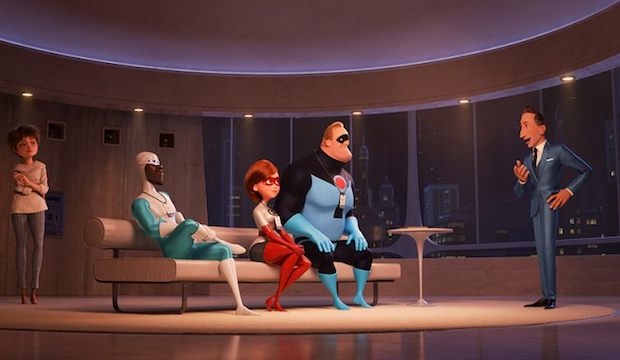 Of course, they are saved from such mundanity by Winston Deavor (Bob Odenkirk), the childishly enthusiastic owner of DEVTECH, a telecoms company, who is intent on overturning the outlawing of 'Supers', and all through the power of publicity. Unwittingly, he and, less unwittingly, his cool and brainy sister, Evelyn (Catherine Keener), manage to drive a wedge between Bob (Craig T. Nelson) and Helen Parr (Holly Hunter) by suggesting that Helen’s Elastigirl, and not Bob’s Mr. Incredible, take the lead in the campaign.

The plot line feels, quite consciously, relevant and a large chunk of the movie is staked on the gendered role reversal. While Helen gets out and about, taking down the bad guys, Bob tries and spectacularly fails to househusband, juggling math homework with 'Dash' (Huck Milner), boy trouble with Violet (Sarah Vowell) and bedtime with the baby, Jack-Jack, who is starting to show off his admittedly unmanageable array of superpowers. Much of the humour here is domestic (which will play incredibly well to parents) and is another way this follow-up borrows a little bit of the first film’s lustre, that entertaining and thoughtful mixture of the ordinary and the extraordinary. 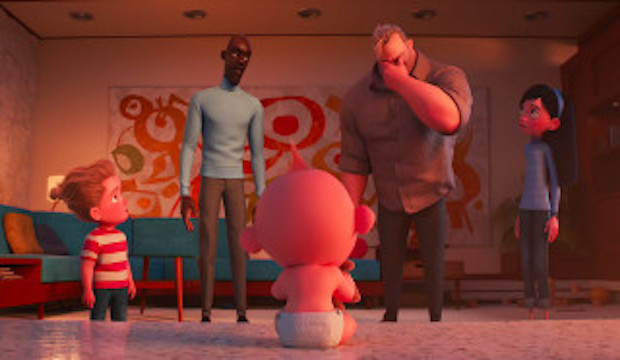 But, when weighed up against the original, the sequel is slightly lacking in parts. The villain, Screenslaver, who induces hypnosis via screens – another very consciously ‘2018’ plot line – has much less heft than 2004’s Syndrome and feels less present. Neglected, too, is Samuel L. Jackson’s Lucius Best (a.k.a Frozone), who’s only drafted in a few times, and the zippy one liners of the unforgettable fashionista Edna Mode (Brad Bird, himself) ends up displaying how thin so many of the other characters’ ones are.

If some of the original’s sharpness seems to have melted away, perhaps that’s the natural consequence of leaving a project lying around for too long – it’s been fourteen years since The Incredibles was released. Then again, perhaps we’ve been spoilt. The Incredibles did raise the bar extremely high and, even if it can’t match it, Incredibles 2 still has plenty more to offer than the much less solid supermarket superhero fare you can find at the cinema. In essence, we could be doing much, much worse. 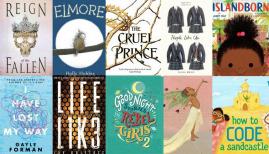