Following his cult success with Berberian Sound Studio and The Duke of Burgundy, Peter Strickland brings another surreal tale of horror. This time, it's about a haunted dress

It's clear that British filmmaker Peter Strickland (Berberian Sound Studio) loves weird movies, and wants to show it in the strangest possible ways.

In Fabric, his fourth film, seems weaved from the threads of David Lynch and coloured by Italian giallo horror cinema. There are ominous telephones, witchy retail assistants, and – most importantly – a haunted red dress that likes to float around.

Strickland has a lot of fun emulating these other, better films, but he doesn't form much of narrative of his own. 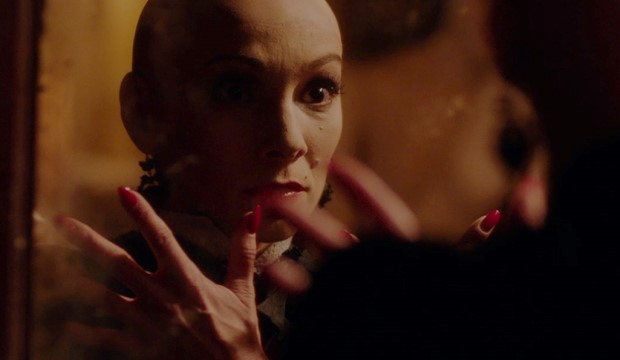 The weird red dress is sold to Sheila, a separated mother with an irritating, sexually active kid. Marianne Jean-Baptiste plays Sheila with an absorbing middle-aged dissatisfaction, which the dress alleviates. She buys it for a dud date, but it soon has a life of its own. But its powers don’t reach far beyond hovering about and appearing in arbitrary places in the house.

Halfway through the film, the dress ensnares a new wearer. It's like Strickland gets bored of his first story and invents a new character to stop from dozing. This is Reg Speaks, a fixer of washing machines, played with hilarious timidity by Leo Bill.

Strickland has a bizarre sense of humour, with sex and fetish being a key feature. One graphic scene has a witch that really, really likes one of the shop mannequins. And whenever Reg gives a detailed explanation of how washing machines operate, the people listening go into a near-orgasmic trance.

These sequences are visually daring and thrillingly dark – but their purpose, it appears, is just to look weird.

The strongest comedy moments are in the bureaucratic, almost dystopian systems that employ Sheila and Reg into their strict routines. A Kafkaesque double-act, which includes comedy actor Julian Barrett (The Mighty Boosh, Killing Eve), keeps the office in check – making sure that no minute is wasted by unproductive activities, which includes going to the toilet. Even waving to a higher ranking employee is classed as an inappropriate ‘informal salutation’ that must be regulated and stopped.

It’s hard to enter In Fabric blindly, without any awareness of the films that inspired it. It’s like a dark joke for cinephiles. This can be fun at times, but Strickland doesn’t take the concept very far. The film has a seductive, dream-like distortion, but the result is an underwhelming, sartorial nightmare. Strickland focuses on creating memorable images, but neglects the stories they’re meant to be serving.