The Chi-Raq cast are valiantly sincere, but Spike Lee (Do the Right Thing) has directed a faintly embarrassing musical

Chance the Rapper claimed to speak on behalf of the whole city when he Tweeted that ‘we not supporting this film out here’. Chi-Raq, Chance said, was ‘goofy… exploitative and problematic,’ rounding up with a heartfelt condemnation of director Spike Lee: ‘You don’t do any work with the children of Chicago, you don’t live here, you’ve never watched someone die here.’

Fellow rapper King Louie released a song simply called ‘F*** Spike Lee’, and Kanye West, perhaps the most famous Chicagoan in contemporary music, turned down a part in Chi-Raq – and Kanye has said yes to cameos in Anchorman 2 and, um, The Love Guru. You don’t have to be a fan of hiphop to see that Lee’s film doesn’t exactly have its thumb on the pulse of the culture.

Chi-Raq is an adaptation of the Ancient Greek comedy Lysistrata, updated to modern day Chicago for supposedly satirical purposes. In Aristophanes’ play, the Peloponnesian war is stopped when the women of both Sparta and Athens agree to withhold sex from their husbands until the fighting stops; in Chi-Raq (a portmanteau of Chicago and Iraq, alluding to the city’s high murder rate), the ‘Spartan’ and ‘Trojan’ gangs are subjected to a ‘No Peace, No Pussy’ campaign by their wives and girlfriends until they down weapons. 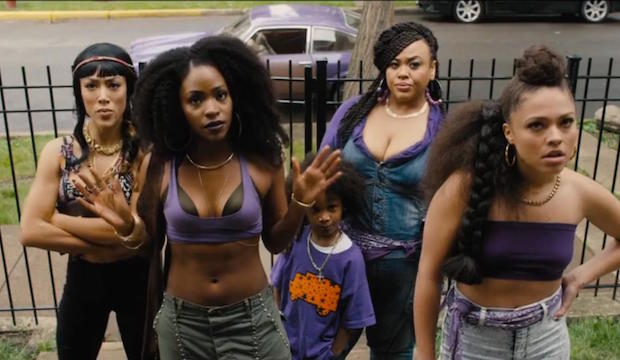 It sounds like a cunning and timely high-concept comedy until you start to think about the implications. Lysistrata is about battle-of-the-sexes power-play; Chi­-Raq, by contrast, is an openly political film about a contemporary political moment, released at a time when race-relations and gun control are issues central to a bitter and high-stakes US election.

In that context, Chi-Raq feels clumsy and irrelevant. There’s no space here to list everything that’s iffy about it, so we’ll limit ourselves to saying that you don’t have to be Chance the Rapper to feel that ‘the idea that women abstaining from sex would stop murders is offensive and a slap in the face to any mother that lost a child’ when applied to real murders that happen every day.

But even divorced from reality, Chi-Raq doesn’t succeed. It’s too long, the songs are unmemorable, the dialogue is all in rhyming couplets of patchy scansion, and – most damagingly – it’s not nearly funny enough.