The piece shimmers as it rotates, offering quite literally a moment of reflection.

It follows on from Cornelia Parker's equally witty One More Time (a replica of the station clock hung to hide the original), part of the Royal Academy's ongoing sculpture collaboration, now in its fourth year, with St Pancras International. There's been more than a six-month breather between installations.

Ron Arad RA is an Israeli industrial designer, artist and architect. He has installed pieces all over the world, including the building of The Design Museum, Holon, Israel and a roboticised sculpture in the Royal Academy courtyard, Spyre, that you won't miss on your way in to visit the Summer Exhibition.

The St Pancras installation provides a contrast to the Royal Academy Spyre, though that the two are showing at the same time is no coincidence. Both are kinetic sculpture, but whereas the moving probe at Burlington house behaves like a living entity, moving slightly disconcertingly around the courtyard, Thought of Train of Thought gives travellers a far more serene experience. 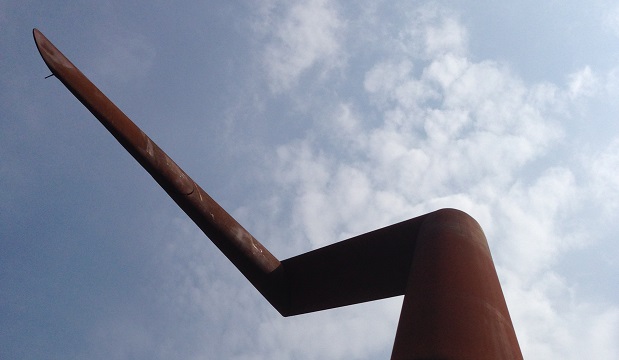 Spyre, Ron Arad's courtyard installation at the Royal Academy, also 18 metres in size, moves erratically and films its surroundings with a camera on the tip

Ron Arad wanted this station installation to have a "hypnotic effect" whilst being "minimal, monolithic and calm". At its opening he is unmissable in hat and coloured scarf, a typical Bohemian artist, all enthusiastic gestures with his hands to explain his work.

Wendy Spinks of St Pancras and Commercial Director of HS1 said the sculpture has already had positive feedback for travellers arriving to the UK from Eurostar. Her tip? Arrive late from Paris and see it at night, where it reflects a very different sort of light. The dead of night was also when they had to install it, and very carefully so as not to wake up sleeping guests in the nearby hotel.

What's the next sculpture going to be after this one? She couldn't possibly say.

As reflections from the sculpture pour down the back wall of the station and one of the free pianos downstairs is played by a someone with a wait for their train, our love for this beautiful station only grows fonder.