Preview: In the new SCAPEGOATING PICTURES Gilbert and George exhibition, London sees the return of their East End 'art for all' to White Cube. 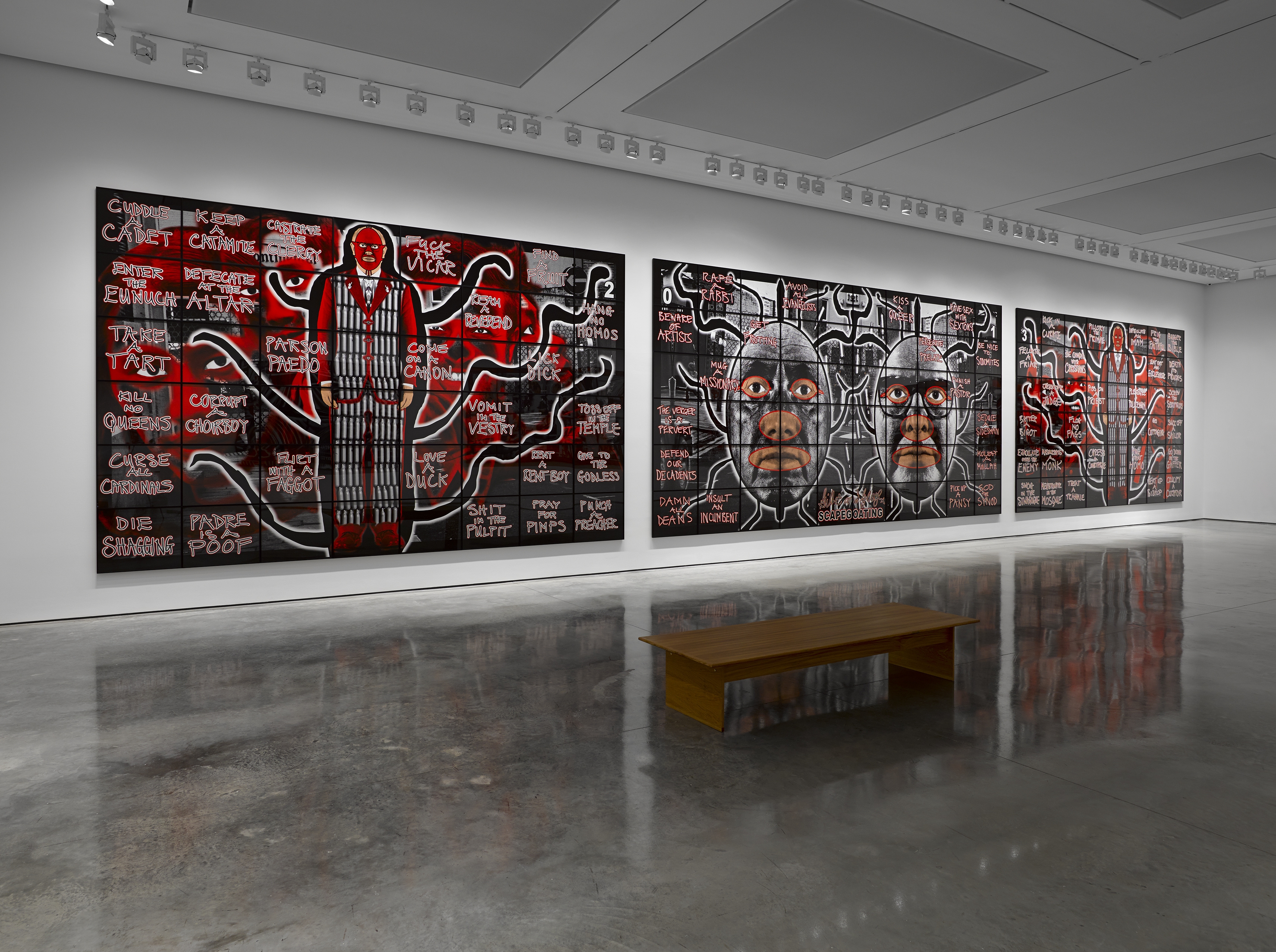 In the new SCAPEGOATING PICTURES Gilbert and George exhibition, London sees the return of their East End 'art for all' to White Cube.

It’s often thought that the artists Gilbert & George are be-suited oddballs who can be put in a comfy basket marked ‘English eccentrics’. But that reading would be to severely underestimate them. For G&G have long been happy to lob visual and verbal grenades into the salons of polite opinion. Ever since the 1970s, when they emerged from St Martin’s School of Art and set up home in the then decrepit and unloved area of Spitalfields, they have delighted in testing the tolerance of the viewer. In the 1980s they became highly controversial and were subject to shrill accusations of being racist and fascist. Using words like ‘Paki’, ‘wanker’ and ‘c*nt’ on their artworks probably didn’t help their case – nor did their 1981 film The World of Gilbert and George, with its observations of the East End’s drunks, skinheads and St George’s flags. Then came the ‘Naked Shit’ pictures which included photographs of their faeces....Yes, Gilbert & George’s work has been on a kind of genteel rollercoaster, and they have survived all the brickbats with non-committal élan. They are chroniclers, not moralists.

For several years the pair have been with Jay Jopling’s White Cube gallery and now White Cube Bermondsey is to show an exhibition of 60 new pieces, called the ‘SCAPEGOATING PICTURES’. With a title taken form an anti-Islamophobia flyer found on Brick Lane, Scapegoating Pictures calls into question  “a new world where everything is based on blame”.These images, undertaken in Gilbert & George's typical square format photographic form, bring all the stained-glass icon-like allusions normally associated with the artist duo together with images of the East End where they still live (albeit in an area that has gentrified around them). The duo’s signature (anti)ecclesiastical visions interpret their favoured territory as a microcosmic analogue for the cultural tensions of today; unbridled hedonism at war with religious orthodoxy through bomb-like laughing gas canisters, bicycles and burkas. "East London is schizophrenic" the duo recounted recently, "everything that is happening in the world is happening in front of our doors."

In a truly stunning display curated by the artists themselves we encounter a wonderfully obnoxious symphony of satisfyingly gargantuan photomontages.

Unapologetically anti-religious ("We were terrorised by religion for 200 years!" ) and unashamedly politically-incorrect, Gilbert & George have often been accused of bigotry. But their art should be seen as divorced from true politics; it seeks to unsettle both the right and the left. They are great obeservationalists and, as ever, Scapegoating serves as a prophetic record of the world around us, perhaps what is to come. It is a provocation and a powerful one at that.

Above all, the fact that they manage to keep so firmly within in their own aesthetic and conceptual orthodoxy, whilst remaining continually engaged and utterly ‘contemporary’, is something of an artistic miracle. Producing all their own work (albeit now only digitally), at 70 and 72 they still push boundaries whether you like it or not.