Everyone's heard of the Soane Museum, but here's our guide to the best of London's Georgian architecture, off the beaten track. Compiled by Neal Shasore. 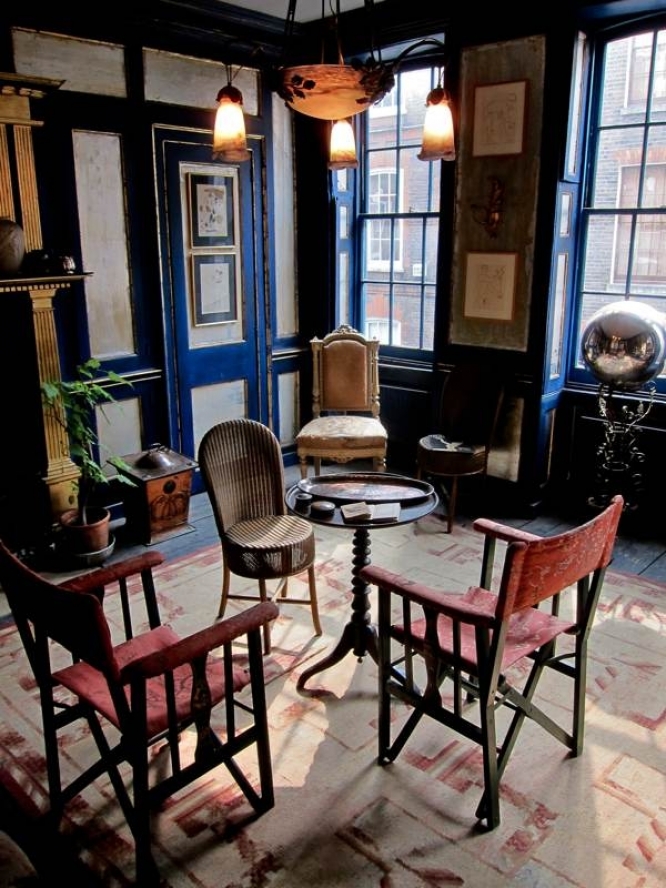 The Blue Room, 31 Fournier St.
There’s been a long-held fascination with our Georgian architectural heritage in London. With a Kent exhibition at the V&A and the new opportunity to glimpse a fascinating Spitalfields residence, 2014 offers the perfect opportunity to re-explore some of the hidden gems of the long eighteenth century.

Here’s our guide to the top 5 house museums and galleries of the period, off the beaten track.

Any visitor to Spitalfields Market will instantly recognise Nicholas Hawksmoor’s rather forbidding façade to one of his great church compositions, Christ Church. In the shadow of its great spire, however, is a wonderful network of streets built on the Wood-Michell Estate developed by a pair of wealthy eighteenth century lawyers; Fournier Street is perhaps the best-preserved and most striking collection of town houses in the area, built for wealthy members of the Huguenot community who were thriving there. On the first floor of number 31, the house of actor and writer Rodney Archer, his friend and former antique-market rival, Trevor Newton, artist and book dealer, has been creating something rather special.

Number 31 will see a number of exhibitions and events held in the first floor gallery, set amongst a sumptuous set of interior spaces including the centrepiece of the house coloured in vivid Prussian blue featuring Oscar Wilde’s fireplace and over mantel from his house in Chelsea. In the summer months, a walled garden to the rear of the house will be opened up to allow visitors to mingle and converse.

Whilst the luscious panelled rooms with their original wainscoting will be a real treat for anyone with even a mild appreciation for great interiors, 31 Fournier Street is a private exhibition space in a private house. Restricted access is what will keep this space a special one: it is not for traipsing tourists – and events and exhibitions are not publicly advertised. Visits are strictly by application only, and you must remember to RSVP.

But it is precisely this sense of quirk that brings this eclectic interior so much to life, and there is plenty of opportunity for bibliophiles and art lovers to get their hands on some rather unique mementos of this extraordinary space – in July, for instance, a set of 50 original 1850s French hand painted gouache designs for silk velour fabrics, exhibited as part of the Huguenot Threads Festival, will be reproduced in a highly desirable volume for purchase.

On the other side of London, Southside house offers the perfect opportunity for a cultural trip only a short distance away from strawberries and cream on Murray Mound for tennis fans in June. Designed by Dutch architects for Robert Pennington, a friend and fellow exile of Charles II, in contains a wonderful collection of furniture and artworks connected to and owned by the Pennington’s descendants. It hosts a regular programme of lectures, concerts and workshops. Local chamber music groups often perform at the house. The gardens are a particular highlight, themselves playing host to art and performance events, with spaces ranging from the formal and ornamental, to the wild and woodland.

The perfect accompaniment to the V&A’s newly opened exhibition on the Georgian architect William Kent, a quick ride on the District Line to Turnham Green takes you to Lord Burlington’s Palladian Villa, Chiswick House. The residence features some of Kent’s finest interiors and designs, as well a breath-taking and revolutionary garden, also laid out under Kent’s instructions. Don’t miss the recently restored landscape views of Chiswick painted by the Dutch artist Pieter Andreas Rysbrack. The last time the public were able to view these works was over 50 years ago.

Most culture vultures in London have visited Sir John Soane’s House on Lincoln’s Inn Fields (if you haven’t been – go!), but fewer will be familiar with Sir John’s country pad, Pitzhanger Manor. Formerly accommodating the local public library, the house is being slowly and painstakingly restored. There is also a fantastic exhibition space in the 1940s extension to the building, PM Gallery. The space is a refreshing interlude to an intensely eighteenth century tour, currently hosting an exhibition of architectural photographs by Richard Pare, including photographs of works by Modernist master, Le Corbusier. For the weary traveller, round the corner is arguably London’s finest pizzeria, Santa Maria, right opposite Ealing Studios.

Finally, to Chelsea where nestled in an unassuming Queen Anne Terrace (built right at the beginning of the eighteenth century) on Cheyne Row, is found the house of the great Victorian thinker and historian, Thomas Carlyle. He lived in the house in the middle of the nineteenth century, and this small museum preserves the interior as close to its 1850s state as possible. The house also features a charming Chelsea garden. For those in a botanical mood, Chelsea Physic Garden is only a short walk away.