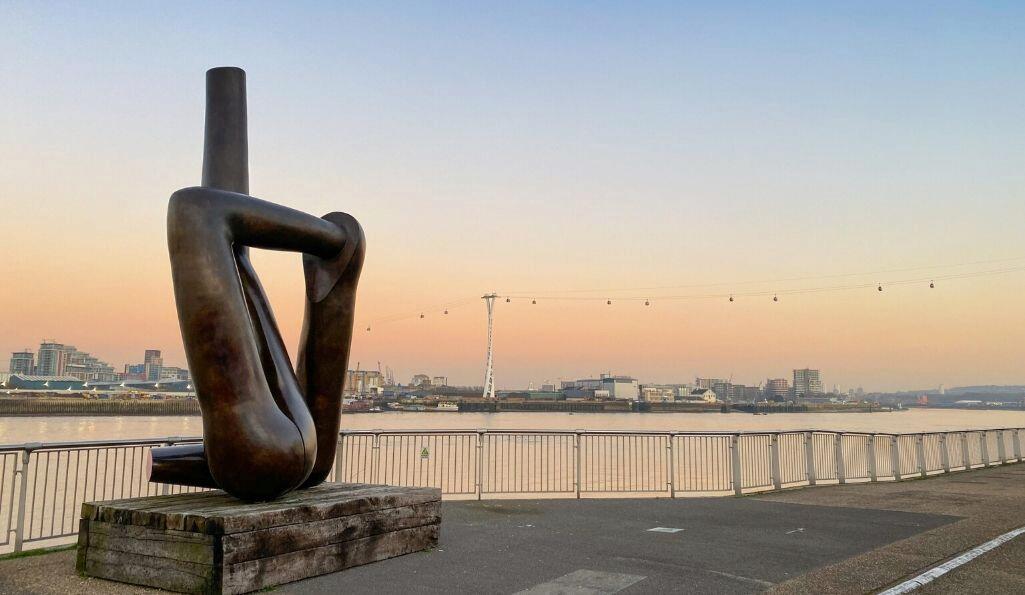 With the city largely free from tourists, why not take advantage of these unusual times and seek out sculpture in the city centre? It is here you will find the history-makers, the heroes and literary giants, the artistic heavyweights and the innovators. We have listed these works from north to south. Start either in Hyde Park or Parliament Square Gardens.
Kensington Gardens

In Kensington Gardens you will find Henry Moore's The Arch, a six-metre tall structure on the north bank of the Long Water. Moore gifted this piece to the nation in 1980 and it is a perfect example of the elegant and abstract nature of his work. Moore was primarily influenced by the curving forms of the human body, and even in this abstract piece, as you look through the arch, it is possible to imagine a bowed figure. 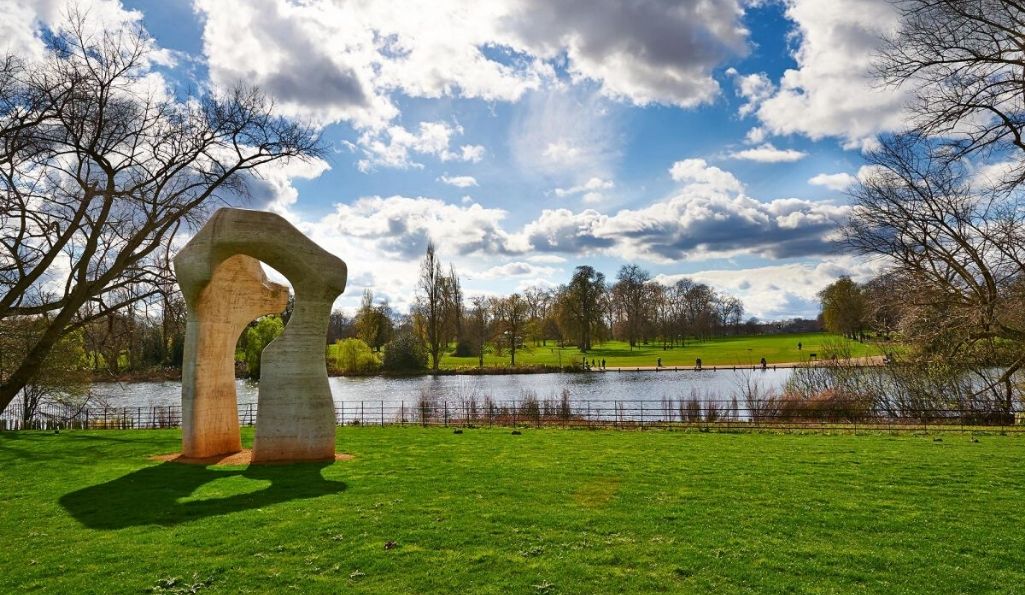 On the other side of the Long Water sits a bronze depiction of JM Barrie’s Peter Pan by Sir George Frampton. This impish little boy stands atop a swirling pillar of characters on the site where he landed his bird's-nest boat in the story The Little White Bird. A project called Talking Statues London has breathed extra life into this figure. Scan the nearby code with your phone to receive a call from Peter himself. 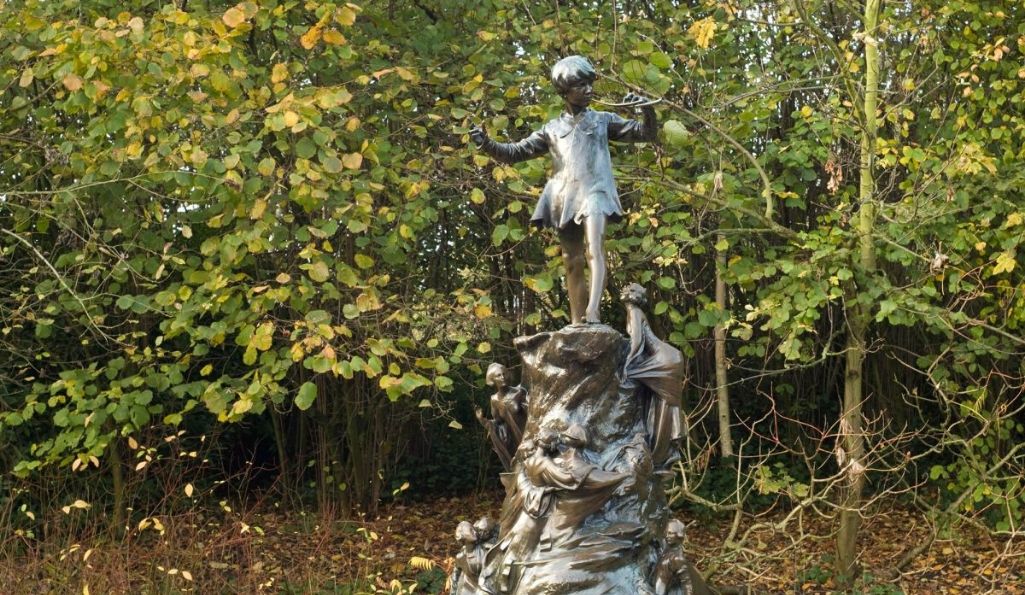 Head north from Hyde Park to Marylebone Street, to find Sherlock Holmes, puffing on his pipe, replete in his deerstalker hat and Inverness cape. The statue is the work of artist John Doubleday and stands on the presumed site of Holmes’ fictional residence, 221 Baker Street. Talking Statues London has also given this famous sleuth a voice. Just use your smartphone and the nearby code to hear what he has to say. 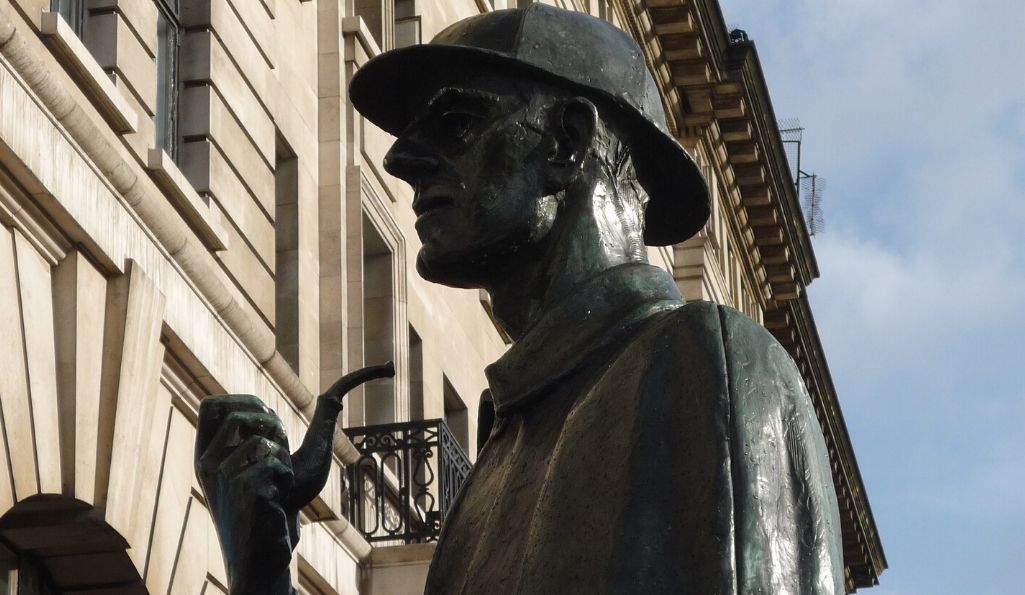 At the centre of our square mile of sculptures sits an unexpected Barbara Hepworth. Hepworth was a modernist sculpture (and contemporary of Henry Moore), who kept an idyllic studio in a sleepy corner of St Ives, Cornwall. But her fame was international and her works are housed in collections across the globe. If you look up on the side of John Lewis on Oxford Street, you will see Winged Figure, a work in aluminium and steel that reaches nearly six metres in height. It was commissioned by the store in 1961 and installed in 1963. 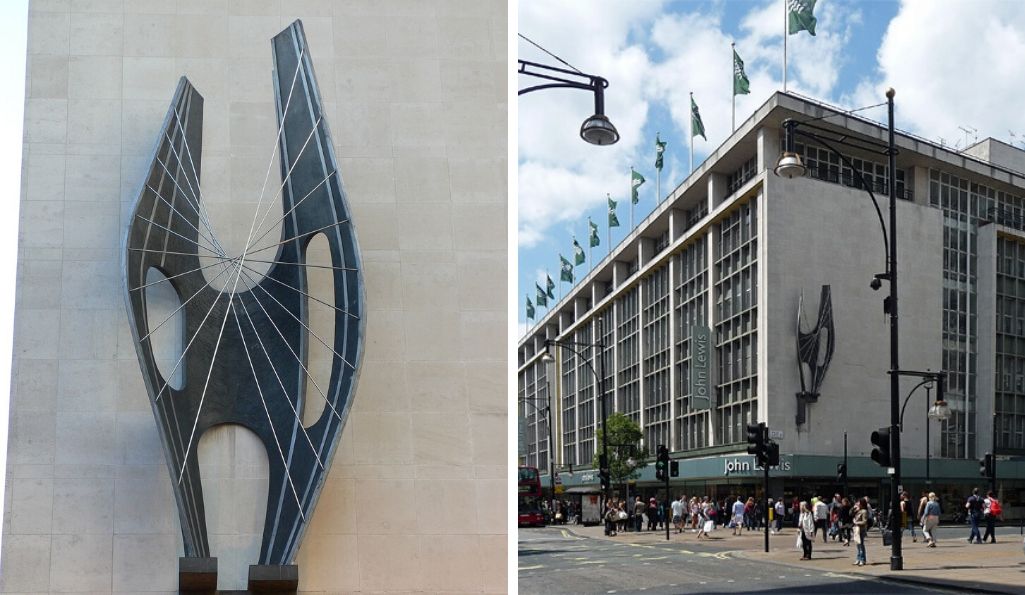 For some serious historical heroes head to Parliament Square. Here stands Gillian Wearing’s 2018 monument to the suffragist Millicent Fawcett, the only woman represented in the square (there are 12 statues in total). It was erected to commemorate the centenary of the 1918 Representation of the People act, which gave some women over the age of 30 the right to vote. Fawcett holds a banner, which reads ‘courage calls to courage everywhere,’ a quote from a speech she gave in 1920. 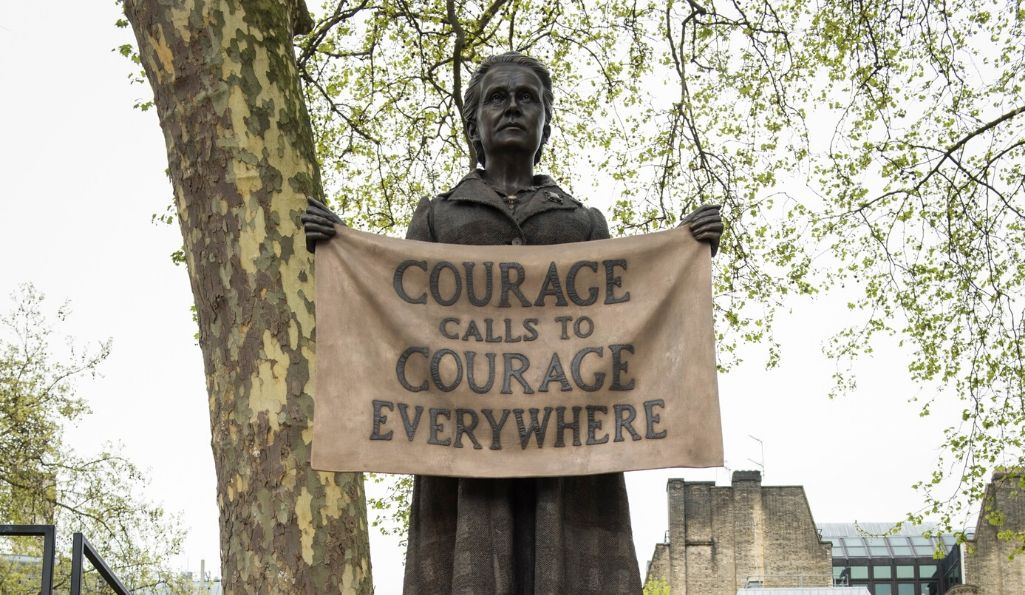 Also in the square you will find statues dedicated to two more visionaries, namely Mahatma Gandhi and Nelson Mandela. Gandhi’s statue was erected in 2015 to mark the centenary of his return to India and the beginning of his campaign to free India from British rule. Winston Churchill (whose own statue stands just metres away) famously hated Gandhi, saying of him, ‘we should be rid of a bad man and an enemy of the Empire if he died.’ Churchill also had many unsavoury words to say about the Indian population in general. It is pleasing then, to see Gandhi’s monument occupying such a venerated position outside the Houses of Parliament.

Tucked away behind St Martin-in-the-Fields, just off Trafalgar Square, is Maggi Hambling’s A Conversation with Oscar Wilde. Cast in bronze and realised with Hambling’s painterly energy, this statue is a portrait of the great 19th-century wit and playwright. Wilde's likeness emerges from the head of a coffin-shaped base, as though he were coming back from the dead for a casual chat. Look closely, and you will see his trademark carnation fixed to his lapel.

If you are feeling energetic and continue your walk north as far as the British Library, you will find Eduardo Paolozzi’s monumental sculpture of Sir Isaac Newton, made in 1995. Paolozzi based the figure on William Blake’s famous work, Newton: Personification of Man Limited by Reason (1795). Blake’s illustration was a critique of Newton’s prioritisation of the scientific over the spiritual, but Paolozzi has turned this image on its head, producing a celebration of the mechanised age. Just look at those limbs, which appear to be hinged together by bolts, and his thighs, seemingly powered by pistons. You can hear what Newton has to say via Talking Statues London. 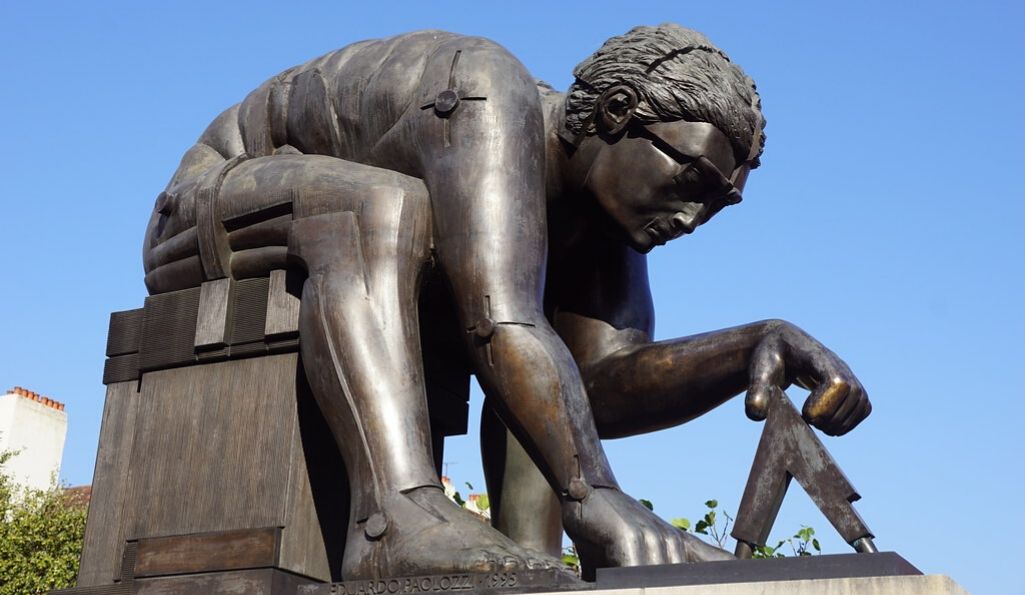 On the Greenwich Peninsula, circling the O2, is a collection of contemporary sculptures that make up part of a regeneration project called The Line. These sculptures are on loan, so it's worth checking the website from time to time to see what’s currently available. At the moment you can see Gary Hume’s spectacular bronze, Liberty Grip, and Richard Wilson’s permanent installation, A Slice of Reality, which takes the form of a cross-section of a sand dredger, which floods every day with the rise of the Thames. On the Coal Jetty you will be able to see Antony Gormley’s work Quantum Cloud, set against the backdrop of the area’s ever-growing skyline. 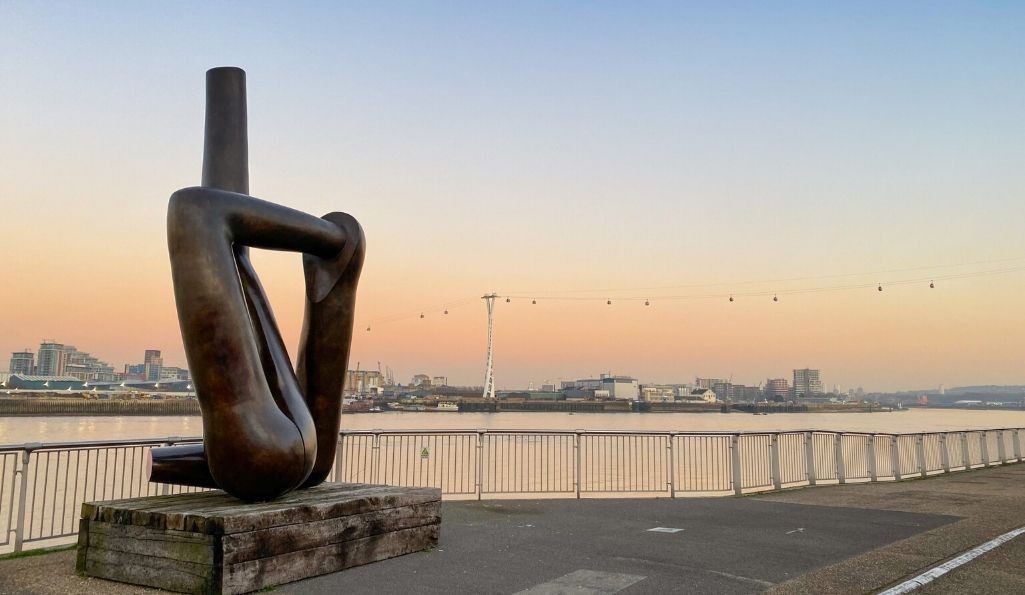 Over the river, in Billingsgate Market is Pierre Vivant’s Traffic Light Tree, which lights up with a confusing array of stop-go instructions. And a short walk away is Canary Wharf, which is home to Helaine Blumenfeld’s bronze sculptures until 26 June.