Brutal Beauty, a comprehensive retrospective of French artist Jean Dubuffet at the Barbican, challenges our notions of art, beauty and the world around us

What the French artist brought us, and the Barbican superbly illustrates in Brutal Beauty, the first major UK exhibition of his work in over 50 years, is a new, grittier, more authentic way of looking, which would form the basis of his Art Brut – Raw Art. Not that there is one model or a single aesthetic defining Dubuffet's work; on the contrary, the sheer variety of approaches, media, tools and sources of inspiration points to an endlessly curious spirit, always on the look-out for ways of making art.

Take his approach to the female form. He found the notion of beauty inherited from the ancient Greeks 'depressing'. His frankly disturbing portraits of women, contained in one of the exhibition's sections, show masses of sprawling lurid flesh, squashed yet unmistakably female, in the oil paintings; or crossroads of intersecting capricious lines and dots filling in bloated outlines in his ink drawings.

Dubuffet started painting in the final year of France's occupation by the Nazis. Fascinated by the roughness of building materials and graffiti, his first works were scrawled on walls defaced by the propaganda of war and resistance; and he produced a series of illustrations for a collection of poems entitled The Walls. His human figures are part-infantile, part-grotesque, with oversized heads and ill-shaped bodies, something which outraged some established critics when first exhibited in late-40s Paris; but immediately attracted other iconoclastic artists, such as Le Corbusier, who became his first buyer. Decades later Dubuffet would prove hugely interesting to the American graffiti artists Keith Haring and Jean-Michel Basquiat. 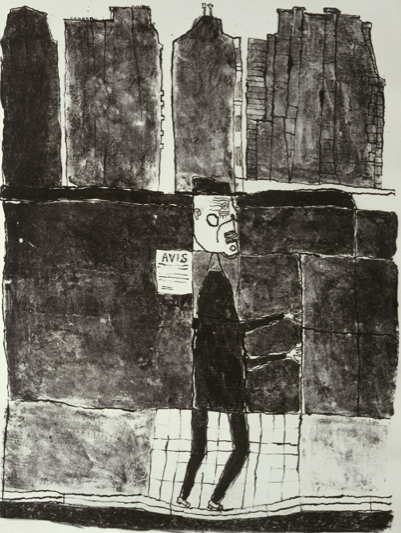 Jean Dubuffet, Wall and Opinions (Murs et Avis) January-March 1945. Collection Fondation Dubuffet, Paris © ADAGP, Paris and DACS London
A two-year stay in Algeria gave rise to a series of large paintings which seek to capture the spirit of the Sahara desert in grainy canvases of tan shades and intricate textures; an encounter with a friend who collected butterflies led to a series of what Dubuffet called 'assemblages', a term he preferred to 'collages', where butterfly wings enhanced by oil paint form the outlines or detail of the images portrayed. 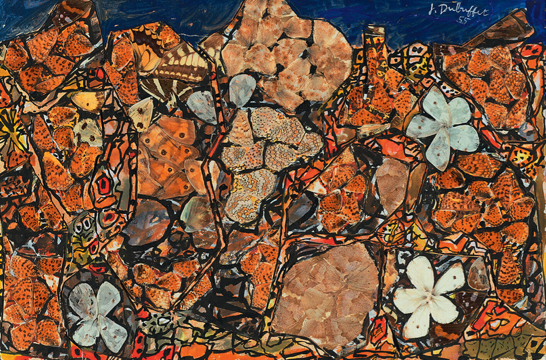 Jean Dubuffet, Garden with Melitaea (Jardin aux Mélitées) September 1955, Collection of Amy Gold and Brett Gorvy © 2021ADAGP Paris/DACS London. Photograph courtesy of Amy Gold and Bett Gorvy
Dubuffet was also deeply interested in the work of outsiders, visiting psychiatric institutions and building an extensive collection of paintings and objects by overlooked or outcast artists. The exhibition features work by 18 such artists from his collection, some rarely seen.

Particularly eye-catching is a section from Dubuffet's Coucou Bazar, animated, life-size artworks, which were operated by performers, motors and remote control and gave a one-hour performance meant as a 'living painting' at the Guggenheim Museum in New York in 1971. These figures, now motionlessly assembled on a corner platform, are coloured in wavy, whimsical lines of red and blue on white backgrounds, part of the playful cycle of work L'Hourloupe, the title itself an intricate play on words and meanings.

Brutal Beauty is informative, thought-provoking, enticing and disquieting in equal measure, a wonderful testament to the work of a provocative genius. As Dubuffet himself put it. 'Art should always make you laugh a little, and fear a little. Anything but bore.'