In lockdown, London-based artist Idris Khan created a new body of work reflecting the tumult of 2020. Now it's going on display at Victoria Miro London

The Seasons Turn, a new exhibition at Victoria Miro gallery in London, includes two distinct installations executed in lockdown. One comprises a suite of 28 watercolour and oil collaged works on paper that incorporate digitised fragments of the score of Vivaldi’s baroque masterpiece The Four Seasons; the other features rich blue paintings whose bands of colour are layered with the artist’s thoughts, feelings and responses to 2020.

Khan has long advocated for a slower, more considered way of looking. Lockdown, it turns out, presented an opportunity to do just that. In these watercolours, according to the gallery, ‘he reflects on his own increased awareness of the changing rhythms and colours of the natural world’. Of the 28 watercolours, seven visually reference the four seasons, from the vibrancy of spring to the starkness of winter. 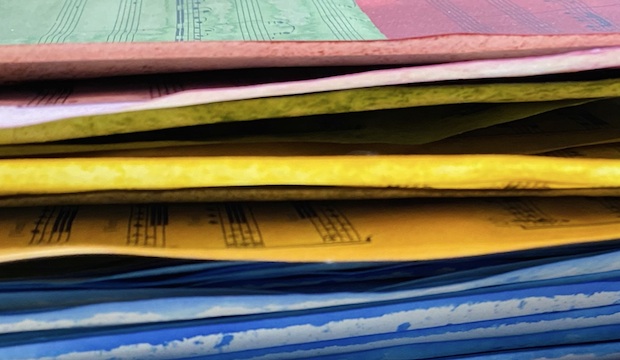 Born in 1978, Khan rose to prominence in 2004 after he scanned every page of the Qur’an – which he thinks was 1,953 pages – and then condensed and digitally layered the images. ‘It got a lot of notice,’ he later said.

He made news headlines again in November 2019 when he unveiled a monumental new public work, 65,000 Photographs, at One Blackfriars in London. Referencing his personal archive of some 65,000 photographs, the towering sculpture asks us to consider the spatial volume that this many images would fill, drawing attention to the near forgotten art of photographic printing in our increasingly digitised world.

Over the course of his career, Khan has been the subject of solo shows in national and international institutions including the Whitworth Gallery in Manchester, the National Gallery of Art in Washington and the Guggenheim in New York. His works is also held in permanent institutional collections from London to Dubai. In 2017 he was appointed OBE.

With his first career retrospective in the United States planned for 2022, Khan’s star is in the ascendant.