David Zwirner Gallery is devoting its three-floor Mayfair site to new works by Bridget Riley. And quite frankly, the result is mesmerising

In the 1960s Riley broke through the glass ceiling with a new language of measured abstraction that ran Abstract Expressionist painting right out of town. For this show Riley is up to her old tricks of mathematical precision and pure form, but with a series of new works from the last four years – proving that this 86 year-old still has some discombobulating left to do.

TRY CULTURE WHISPER
Receive free tickets & insider tips to unlock the best of London — direct to your inbox
In the first gallery of David Zwirner’s townhouse, Riley takes us back to the good old days of Op Art – to a time when she was the It girl of London’s Swinging art scene. These initial mosaics of white and black triangles share poetic titles like Quiver and Rustle, which match their quiet fragility. Tessellating out into infinity, the gentle curves of the triangles in these paintings are positively dizzying and leave you no option but to pull up a stool and let your mind wander. Somewhere between a hallucination and optical tomfoolery – these opening works show Riley at her most powerful. 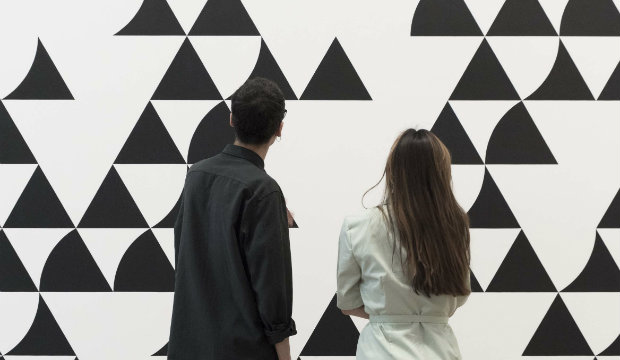 Heading upstairs, the mood of the exhibition shifts and Riley turns her attention away from triangles and back to the discs that first made an appearance during the 1960s. In a series called Measure for Measure Riley toys with an array of circles in pastel purple, green and pink that take a leaf out of the book of her heyday, but adds a new twist. Ordered into careful grids on the walls, the circles seem to dance across the gallery a little like PAC-MEN on the loose.

Up to the final floor and the discs seem to have taken on a life of their own, bouncing off the walls with an energy that simply can’t be kept in check. In each of these paintings Riley makes small changes to the composition of circles and arrangement of colour to alter their sensation entirely. This reveals Riley’s genius when it comes to colour and points a big arrow to the influence of Neo-Impressionist painters like Georges Seurat who used dots of pure tone in their own dabbles with optics.

For her third solo outing with the international powerhouse David Zwirner, Riley makes a splash with new works that aren’t just shadows of her former self, but psychedelic triumphs in their own right. While it’s fair to say this show would have earned our respect come what may, it’s a delight to find Riley still at her most dazzling. 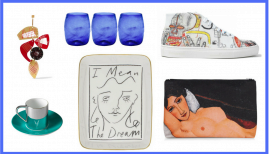