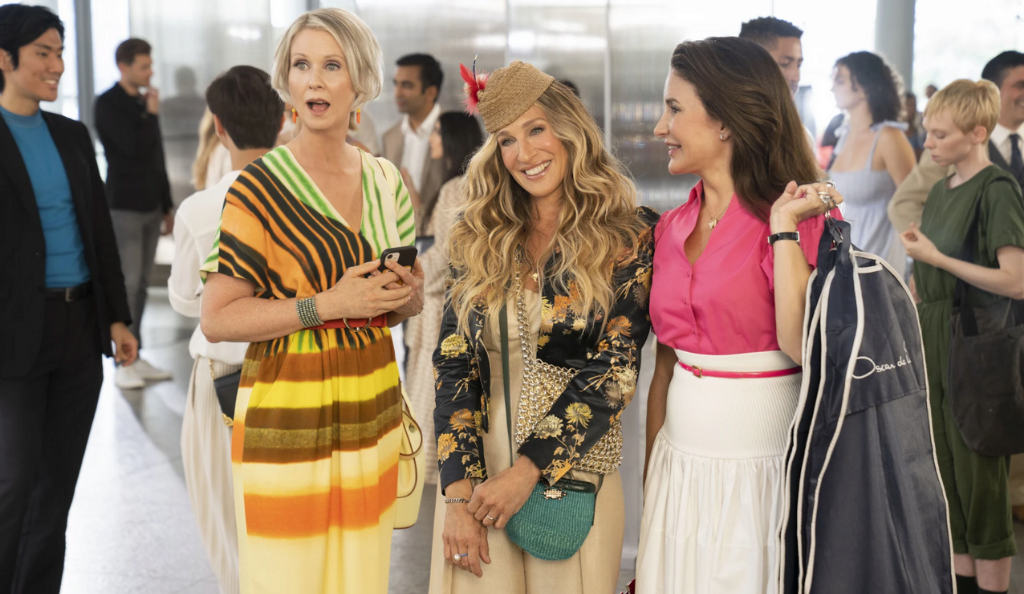 Please be aware that this review contains spoilers
There was no question in my mind that I’d be watching And Just Like That…, although I did feel some trepidation about it - and after two episodes, I still do. And Just Like That… is not great. But the second episode brought up a surge of emotion I wasn’t anticipating, which makes me curious for more.

I’m what you might call an obsessive OG SATC fan: the characters, style and personality of the series shaped my understanding of relationships when I watched it in high school and my early 20s.

I almost felt a part of the original series; as a Manhattanite, I’d see actors from the show on the street, or even stumble upon scenes being filmed outside city restaurants and shops. Rewatching SATC in my 30s (after becoming a mother myself) made me a more critical viewer, but the whimsy and joy of the fashions never fails to lift my mood.

So let’s start on a high. If you’re here for the clothes, the first two episodes of And Just Like That won’t disappoint. Carrie’s style is exuberant as ever as she experiments with accessories in fun new ways (pandemic-friendly sparkly gloves for pushing elevator buttons, double cross-body bags, amazing headgear). Miranda’s looks are bolder, brighter and more playful than we’ve seen in the past and newbie Lisa Todd Wexley (played by Nicole Ari Parker), a socialite mum friend of Charlotte’s, has the most insane/incredible/eye-catching outfits we’ve ever seen, complete with giant statement jewellery.

While the clothes are a masterful lesson in 50-something dressing and escapist fantasy, the language of the show fails to reflect what the wardrobe is telling us. Instead of illustrating that with ageing comes confidence and empowerment, all we hear is how much of a drag it is (see: Charlotte telling Miranda her grey hair makes her look older).

The painful awkwardness of the first brunch scene carries on throughout episode one, with personality inconsistencies and stylistic choices that just feel weird, cringey and unnecessary. There is no doubt that the Carrie, Miranda and Charlotte dynamic is missing the spark of the firecracker that is Samantha Jones. Her absence from the show is explained away with a move to the UK. While it’s true that friendships can completely evaporate as we age, this explanation feels particularly unsatisfactory because we’re desperately missing Samantha’s energy and rebelliousness.

Instead, we have Carrie and Mr Big in happily wedded bliss. She’s now an Instagrammer who posts photos and videos of stylish people - worryingly, without their consent - and feels prudish talking about sex on the podcast she’s a part of (hosted by Che Diaz, played by Sara Ramirez, the show’s first nonbinary character). When asked by Diaz if she’s ever masturbated in a public place, Carrie quips: “Not since Barneys closed.”

Miranda has a horny teenage son, a husband who can’t hear anything and an alcohol problem which involves day drinking pre-11am and lugging a bottle of wine in her handbag to get through a “tween Mozart” concert. Leaving her job in corporate law to pursue something more fulfilling leads her back to school for a master’s in human rights. This trajectory involves a number of bizarre faux pas with her new professor, Dr Nya Wallace (Karen Pittman) that feel very out of sync for Miranda’s character. Charlotte is on 'planet Manhattan private school', which means she’s obsessive about things like piano recitals at the Manhattan School of Music and forcing her children to wear Oscar de la Renta gowns for them, which tracks nicely for her.

The first episode felt out of touch with the SATC I grew up loving, and also a bit overindulgent yet grasping… and then Big dies (after completing his 1,000th Peloton ride).

And just like that, the whole mood of the series seems to shift.

I thought the second episode of the show was really emotional and visually beautiful. Was it perfect? No. But I did find myself weeping throughout, which surprised me. Maybe 20-years-ago me was mourning the loss of Big and Carrie, a relationship I found intoxicating when I was younger? I was also devastated every time the glorious Willie Garson, aka Stanford Blatch, spoke, thinking about his death earlier this year when the series was filming.

I think centring the series on grief can be a powerful choice, considering we’re all grieving something at the moment. Grief is still very hard to verbalise and deal with publicly.

Seeing grief depicted on-screen with honesty and the occasional bittersweet moment of humour is really important. Carrie’s tension with Charlotte and how she’s processing this experience feels realistic (even though Charlotte is being super-annoying) - we can’t always control our response to the unthinkable, and it does take a toll on friendships. While people have drawn comparisons to the SATC episode where Miranda’s mother dies, My Motherboard, Myself, this one also reminded me of the time Carrie gives a wedding speech for a couple she barely knows, and Big is there, but emotionally checked out. There was something devastating and beautiful in that episode (one of my faves) that I felt a bit of in this one.

While And Just Like That… is chaotic, cringey and not the show fans were expecting, I’m hoping that perhaps its approach to how we cope with loss and grief (not just mourning those who have died, but friends we’ve lost, too) can teach us something new, just like SATC did all those years ago. Bring on the next episode…