In a salacious interview, Lucinda Chambers claims she was unceremoniously fired... and that she hasn't read Vogue in years 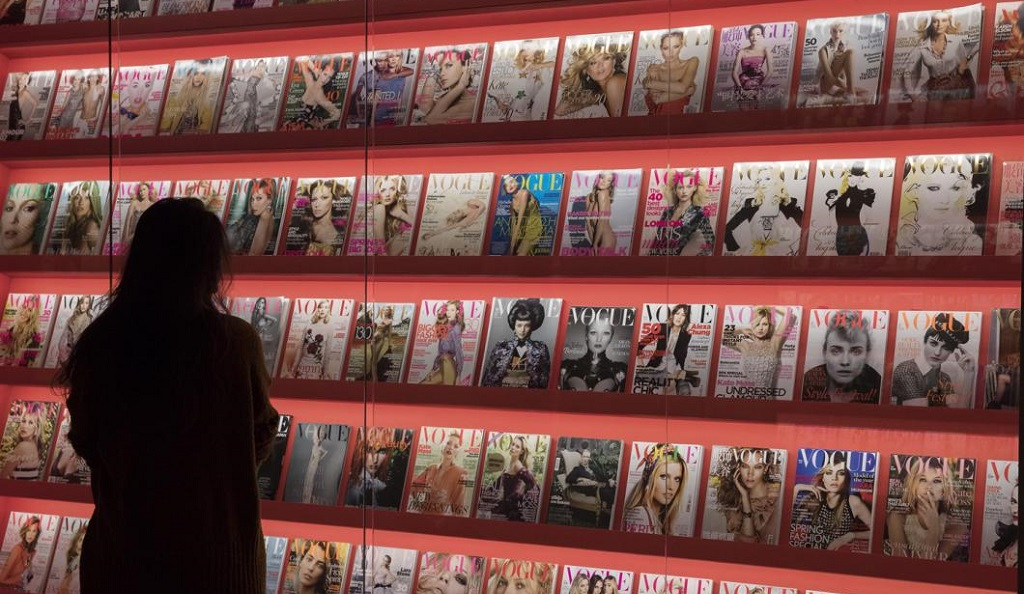 Vogue covers on display at Somerset House for Hair by Sam McKnight
We all hear the whispers about the cut-throat, sharp-tongued ruthlessness of high fashion. But only the Condé Nasties and FROW regulars get to see the drama. Us regulars only get glossy, air-brushed perfection. But now, an insider has gone rogue...

Former fashion director of British Vogue Lucinda Chambers has given an outrageous interview in a little-known magazine about being fired.

It's so juicy, so quotable, that we don't quite know what to do with it. Clearly, the publication, Vestoj didn't, either, as they published the article on Monday, then removed it 'due to its sensitive nature', only recently restoring it to the site.

Fashionistas who took to Twitter suspected a gagging order, but, lo and behold, someone thought better of that, and now it's live again. 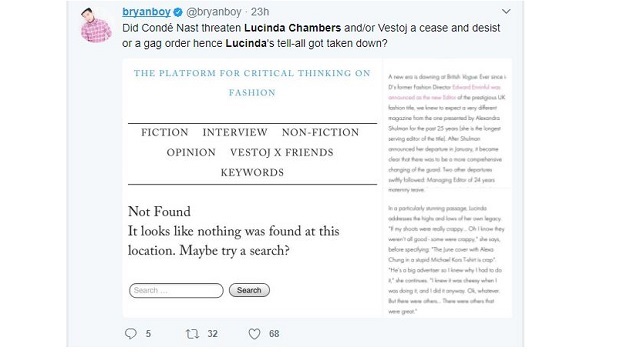 The story goes, Lucinda Chambers claims to have been fired by Vogue's new editor, Edward Enninful in 'three minutes', an allegation Conde Nast have categorically denied as 'wholly incorrect'.

Chambers goes on to talk bitterly about the fashion industry's 'smoke and mirrors'. Her references to Enninful are oblique, too, but we can guess this is who she means when she says:

For all her twenty-five years as Vogue's fashion director, she is quick to point out her failures: 'The June cover with Alexa Chung in a stupid Michael Kors T-shirt is crap' and lastly, drops an even bigger bombshell: 'Truth be told, I haven’t read Vogue in years.'

She goes on: 'Maybe I was too close to it after working there for so long, but I never felt I led a Vogue-y kind of life. The clothes are just irrelevant for most people – so ridiculously expensive.'

Chambers ends with a shot of sanity and a shrewd analysis of fashion's role: 'I know glossy magazines are meant to be aspirational, but why not be both useful and aspirational? That’s the kind of fashion magazine I’d like to see.'

Us, too, Lucinda. Us, too. And we know who we're backing as editor for this new venture.

Meanwhile, the media waits with bated breath. Will there be a backlash? What will be Vogue's move? Is Enniful going to enter into the fray?

See the article for yourself, written up by Editor-in-Chief Anja Aronowsky Cronberg. Its title, 'Will I get a ticket', refers to Chambers' new-found anxiety about being invited to September's fashion shows. And now she's burnt her bridges to Vogue, we wonder if this is all she should be worried about.

Read it, immediately - and screenshot it, just in case it disappears again.