With one of the hardest roles in the operatic repertoire ahead, US-born soprano Corinne Winters considers what happens when couples swap partners 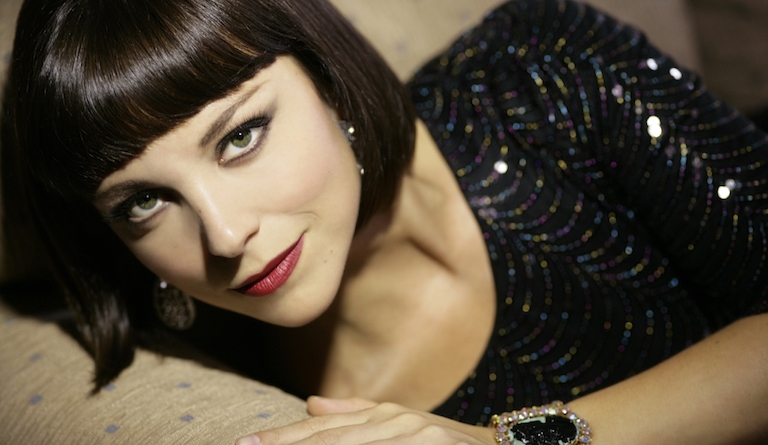 Corinne Winters is one of the most sought-after sopranos of her generation. Photograph: Kristin Hoebermann
Paul McCartney got Corinne Winters into opera. He may not know it, and it wasn’t exactly overnight, but her childhood duets with her music-loving father – “He was John and I was Paul” – made singing second nature. And now the American-born soprano is on the cusp of her debut at the Royal Opera House.

Quite a lot has happened on the way from the Beatles' hits to Mozart’s Così Fan Tutte, of course, but Corinne’s career has, by her own admission, had a pinch of fairydust sprinkled on it.

"I was not brought to be a opera singer,” she told Culture Whisper during break in rehearsals at the Covent Garden. "My mother is very supportive but not musical. My father is an amateur rock musician and a lawyer by profession. I really enjoyed singing in choirs, and I enjoyed pop and rock.

" I loved music so much that it would have been a travesty not to have done it at university. But I took one voice lesson before I went, and the teacher told me I had an operatic voice.

"Although I put the work in, of course, it was the one area of my life where doors kept opening. But it wasn’t effortless: I spent 10 years studying and have been performing for five years.”

She made her debut at the Metropolitan Opera in New York in 2011 and was rapidly singing all over the western world, quickly spotted by English National Opera which has already cast her in three productions – as Violetta, the socialite at the heart of Verdi’s La Traviata (2013), as the daughter Teresa in the highly acclaimed Benvenuto Cellini (2014), and last year as the central character, Mimì in Puccini's La Bohème, a production that was badly received but much redeemed by Corinne’s presence.

It was as her relationship developed with ENO that she moved to London full time, happy as can be in her flat in Islington, and currently walking work. Her partner, the tenor Adam Smith, is working in Belgium – they met in Antwerp in Verdi's Otello – but the pair hope to be reunited in London soon. Looking after that relationship can only have been good for her preparation for the role of Fiordiligi in Così Fan Tutte, which is a comedy about couples swapping partners.

"For this production by the German director Jan Philipp Gloger it’s present day, and it’s a theatre within a theatre. It begins with actors taking a bow having apparently just sung an opera like Così. The two couples are in the stalls applauding, and the men say that their women would never behave as the women on stage have just done. Then Don Alfonso take the men into the theatre action, while the women are always on the outside. The women end up have a lot more power than they usually have in Così.”

Always difficult for audiences is the situation in which the two young women are convinced that their menfolk have gone to war, and are then taken in when the men return in disguise to woo each other’s betrothed. “In our production, Fiordiligi is the slower to be attracted,” says Corinne. "She wants this thing and she also wants the other thing. And her best friend has been with this man, and the relationships are not even. Dorabella knows she is more compatible with Guiglielmo, Fioridiligi with Ferrando, and Ferrando with Fiordiligi, but Guiglielmo wants to get back to reality with Fiordiligi….

"There is a final sense at the end of, 'What are we going to do now?' At some point everyone knows that everyone has been unfaithful. It’s as if you have a fling with someone you know on a cruise, say, then at the end of the week everything goes back to normal. Or someone who falls in love during a production like ours and when the production is over, it’s over."

So it’s a case of “what happens in Ferrara stays in Ferrara” - only, everyone concerned stays in Ferrara too, so there is no escaping what has passed between the four young people. And they are young – the casting at the Royal Opera House has carefully brought together singers who can believably represent those young enough to be tempted and also mature enough to know they must face up to what has happened.

"Mozart was a genius,” says Corinne, "and he was modern, pushing all the the boundaries. I think if he were alive today he would still want his opera to be modern.”

But beyond the thought-provoking drama of the opera, there are huge technical demands in the role of Fiordiligi. “She has the most music in the opera. It has one of the widest ranges of any soprano role and goes from a low a to a high C. It’s insane! plus you have incredibly sustained singing and dramatic high hotes. The aria “Per pietà" requires the intensity of a Verdi heroine and the purity of a Mozart heroine."

Although Così is one of six new productions this year for Corinne, she has just sung it in a concert version, with the same conductor, Semyon Bychkov, in Rome. “We were in gowns and tuxedos, and that was a good way to concentrate on the music.”

Ahead lie her debut with Opera Australia, the role of Rachel in an operatic version of The Merchant of Venice, Halévy's rarely performed La Juive, and the title role in Katya Kabanova for Seattle.

It feels as though those doors just keep opening, but right now Corinne is happy to look no further than London: “The first opera CD I ever bought was Angela Gheorghiu singing La Traviata here at Covent Garden in 1994. For me, to be here at the Royal Opera House is a dream come true."

Così Fan Tutte is at the Royal Opera House (22 Sept to 19 Oct). Click here for tickets and further information. There is a live relay in cinemas nationwide at 6.30PM on 17 October: click here for details.