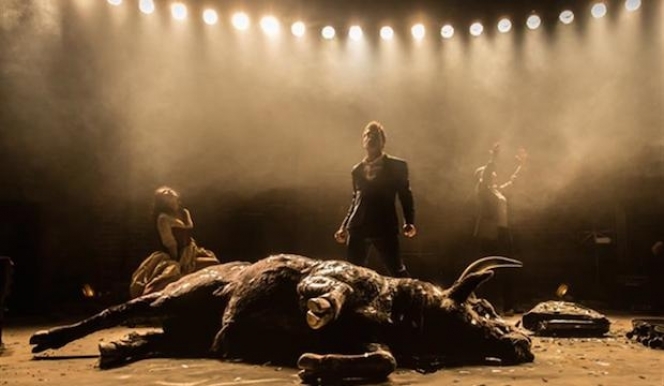 Carmen Disruption, Almeida Theatre: photo by Marc Brenner
The layout of the Almeida Theatre has been disrupted. Entering through a circuitous route, you peep into a dressing room then emerge on stage, where you must step around a life-sized prostrate bull.  Mournful live cello fills the auditorium.

Regardless of your familiarity with Bizet's opera, it's immediately clear that playwright Simon Stephens has taken the themes and aesthetics of, not just the story, but the art form and distilled them into metaphors.

Carmen herself is at once a narcissistic and vulnerable young rent boy (Jack Farthing), and a touring singer (Sharon Small) so jaded that she must check her phone to confirm which country she's in, and a corseted, corkscrew curled mezzo-soprano (Viktoria Vizin), who haunts this stage as the chorus.

Then there's Don José The Fighter as a taxi-driving mother, whose dubious side jobs have forced her to leave her children and live in regret, Micaëla the Lost Girl trying to root herself by having cyber sex with her tutor, and a brilliantly suave bullish businessman version of Escamillo.

Echoing the surtitles of an opera, there's an LED display, illuminating practical details, announcing incoming text messages, but also picking out lines and lyrics, highlighting the poetry of the script.

Initially Carmen Disruption overwhelms, but as the vignettes of monologue progress we realise not only the interconnection between the characters, but their dramatic significance: we are seeing this unspecified European city through the eyes of the singer, whose perception of the people around her is figured by the Carmen opera.

'The lives of people have these innate operatic qualities to them, and I wanted to capture that'  Stephens said of his motivation for reworking the classic. The result is chaotic but compelling thanks to the beauty of the blank verse. The piecemeal insights into each character makes the elevated emotion of the opera relatable and relevant by rooting it in the familiarity of everyday life.

In spite of strong performances from all the cast, inevitably some of the characters were more compelling than others. We were gripped by John Light as Escamillo and Norma Dumezweni as Don José, but despite a well-pitched performance from Katie West, Micaëla the Lost Girl, though funny, felt a bit cliched and hollow (the arch accuracy with which Stephens bought adolescents to life in Punk Rock wasn't there this time.

The advantage of this fractured structure is the varied pace, as the sum of the parts is mesmerising for all its messiness. The play stretches beyond the high-octane, confetti-strewn climax, as the characters filter from the stage and the subtitle machine splutters a stream of jumbled lines, lyrics and symbols.

Carmen Disruption is at the Almeida Theatre until 23 May.
Share: