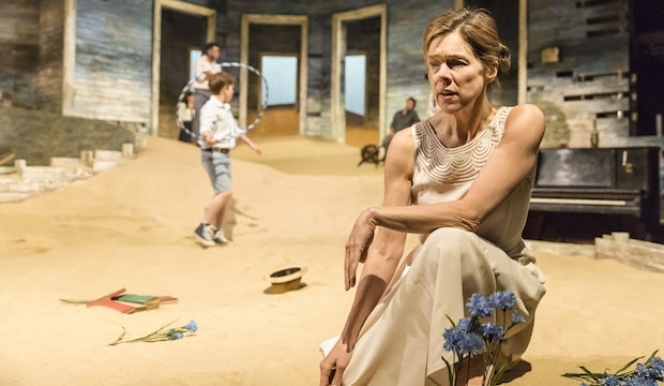 Ah! Wilderness at the Young Vic, photo by Johan Persson
A sloping stage, covered in sand, thrusts out into the audience. An actor (David Annen) stands alone, surrounded by books. Ghostly recorded voices play out. He sits, fiddles, shifts, sits while the audience find their seats. Then, when house lights drop and the play kicks off, this dislocated actor comes out into the audience, pacing, fiddling, occasionally slipping into secondary characters and adding to the dreamy atmosphere of set designer Dick Bird's Dali-esque creation.

The play itself is a slow starter. The quaint Americana takes a while to feel natural and the rhythms of family life are not immediately engaging. But gradually we were sucked into the home, which is warm and naive without feeling artificial. By the time the family gather for their fourth of July supper we're engrossed by the private jokes, drunken antics, and idealistic adolescent Richard, who plots to numb his recent heartbreak with a night on the town.

This warmth, which emerges as a family who, despite their foibles, are loving and supportive, is challenged by the dark undertone in Natalie Abrahami's direction. Negotiating the sand destabilises the characters, adding difficulty to simple actions.The intermittent explosions as little Tommy lets off firecrackers made us jumpy and anxious. Stylised scene shifts add an element of fantasy. And the lingering presence of David Annen gives a metatheatrical twist, like a playwright overseeing his characters, or a grown up version of Richard, looking back wistfully at his youth.

Playwright Eugene O'Neil is better known for autobiographical work Long Day's Journey into Night, which dramatises family dysfunction and addiction. The fictional family of Ah, Wilderness! is, according to the playwright, how he would have liked his own childhood to be. In the context of this wish fulfilment aspect, the dreamy, occasionally unsettling elements of the direction make sense. But at times it overpowered all that is gently uplifting about the play, as the constant implication that something bad was about to happen lost tension and grew mildly irritating.

There were strong performances all around, and we were particularly enraptured by George MacKay as Richard. He captured angsty adolescence with touching sincerity and charming attempts to be nonchalant and cynical. Dominic Rowan as Sid also pulled off inebriation with just the right amount of exaggeration. But the star of the show, and most compelling element of the Young Vic's revival is the set. The sandy space seems starkly minimalist but is full of surprises, proving the perfect chameleon backdrop from a seedy bar and moon-dappled lake.

Ah! Wilderness is at the Young Vic until 23 May. Click here for more information and to book.