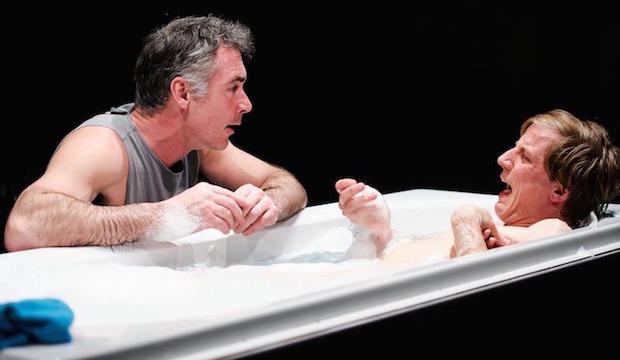 Greg Wise and Oliver Gomm in Kill Me Now, Park Theatre
Park Theatre, London’s launch of Greg Wise back into the theatre limelight after a 17-year absence is an absolute emotional rollercoaster, which doesn’t let up.

Wise’s heart wrenching performance as Jake, the father of a teenage boy with a severe physical disability, takes an enormous journey that deserves praise for its challenging physical arc. But, the emotional rigour of the story can be overwhelming and the black comedy, which is so transfixing at the start, ebbs away in an unforgiving script. It was only slightly disappointing that the notion of the carer father and disabled son changing roles had to be so obvious, and not just through emotional metaphor.

Actor Oliver Gomm as the disabled Joey is a revelation; proving that the Eddie Redmayne Oscar winning performance as Steven Hawking in The Theory of Everything is by far a trickier part to play in front of a live audience. Gomm never breaks character and is able to convey the sullen moodiness of a teenager matched with the trauma of disability with amazing range. Gomm and Wise are simply fearless in tackling such complex characters, literally laid bare before an audience.

Brad Fraser as best friend Rowdy provides a lot of the much needed comic relief from the emotional severity of the story, and Gomm’s incredibly dark one liners are brilliant – if only they could carry on throughout! The two female characters Charlotte Harwood and Anna Wilson-Jones do the best they can with underwritten characters, but its really the men that carry this heart-stopping production.

Nevertheless, Kill Me Now had the audience as putty in its hands, and is a darkly moving play for a more thought provoking trip to the theatre.