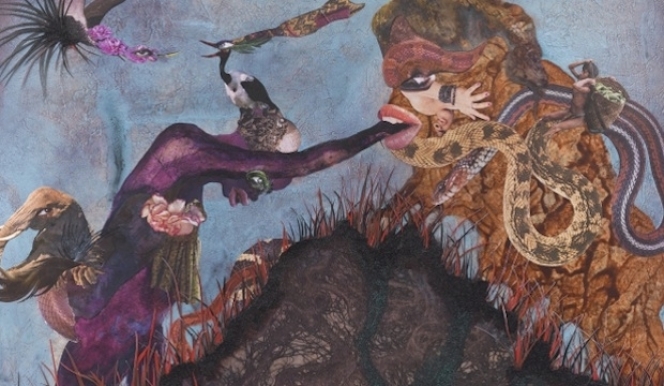 Mountain of Prayer by Wangechi Mutu, courtesy of Victoria Miro
If Venice was the place to be last month, then London is the only place to be this week. The frenzy around Frieze has been building steadily and all of London, it seems, is putting their very best art on show.

There’s truly something for everyone. Marian Goodman’s new gallery is opening on Tuesday with a selection of Gerhard Richter’s latest works, The Pace Gallery is showing a retrospective of the Arte Povera master Mario Merz, whilst Gagosian had to create a custom-made space to cope with the weight of Richard Serra’s four new steel works. Other highlights include Richard Tuttle at The Tate Modern, while a show about "a penniless, dead bloke” (to quote this week’s Sunday Times, and otherwise known as Rembrandt) will have queues around the block at the National Gallery.

A personal favourite (gallery space and artist) is the Wangechi Mutu artwork showing at Victoria Miro, as well as a smaller show at Frith Street Gallery entitled Silver. It celebrates the gallery’s first 25 years, and I would have willingly taken the Thomas Schütte home with me. Also to be recommended on the viewing hit list is Paula Rego’s new show at Marlborough Fine Art. There’s also a charming book available for children: Stone Soup – written by her daughter, and illustrated by Rego, which would make a rather nice addition to the holiday gift list.

Steve McQueen (dinner-party conversation – he took home the Turner Prize 1999, pipping Tracey Emin's bed to the post) is showing at Thomas Dane and is exhibiting sculpture for the very first time – made from Zimbabwe granite, it’s a long way from Hollywood. And we haven’t even started on the auction houses. £230 million pounds worth of art will be on view in Sotheby’s and Christie’s alone, including a beautiful Modigliani that I covet; however, “price on application” is never a good sign. And finishing touches were being put in place on Sunday.

And finally, Phillips is now open in its rather fantastic location on Berkeley Square, and the Schwarzenegger-style skybox (where you can bid without being seen) is the talk of London. Last but not least, one of the Frieze Art Fair highlights is the Hauser & Wirth Booth curated by Mark Wallinger. However, I thought White Cube‘s booth was best in memory. Overall, Frieze is infinitely better than last year and there is quite a lot available under the 8,000 euro point. My four favourite pieces at the fair were: a Thomas Ruff nude from the Konrad Fischer Gallerie, a hand by James Daunt, a beautiful Louise Bourgeois at Hauser & Wirth, and a Wolfgang Tillmans at Maureen Paley.”

Kate Gordon is the founder of London Art Studies.