Don't miss Rembrandt, The Late Works, a once-in-a-lifetime exhibition at the National Gallery 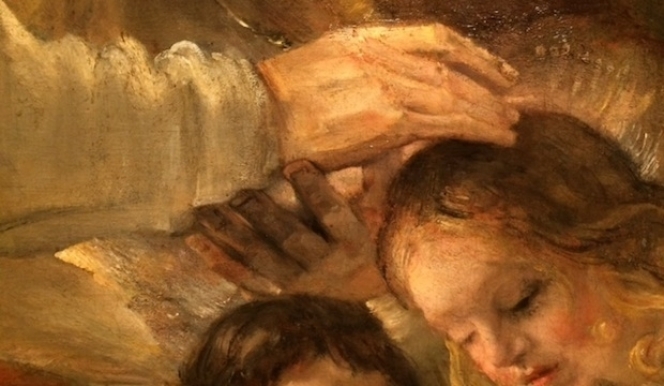 Jacob Blessing the Sons of Joseph, 1656
Background
It is impossible to overstate the importance and influence of Rembrandt as a painter and as a printmaker. He found fame at a relatively young age and his reputation has never diminished in the 345 years since his death. In the final years of his life, despite being beset by personal tragedy and financial difficulties, Rembrandt produced some of his very finest work. In these final years, the ageing artist's creativity and experimental tendencies flourished as he worked rigorously towards the development of a new style of painting. It is the work of this final period of Rembrandt's life upon which this exhibition concentrates.

The exhibition
Rembrandt:The Late Works, is set to be a genuine blockbuster of the sort that comes around very rarely. In fact, the National Gallery are describing it as a 'once in a lifetime' opportunity. This may well be a fair description; it is unlikely that so many of Rembrandt's best works will be together in one place again soon. Organised in collaboration with Amsterdam’s Rijksmuseum, the exhibition features around 40 paintings, 20 drawings and 30 prints on loan from museums around Europe and North America including the National Gallery of Art in Washington and the Mauritshuis in The Hague. The exhibition will include a high proportion of all the confirmed late-period Rembrandt works in existence.

Critical view
It is a mark of the extent of Rembrandt's innovativeness as a painter that during the artist's lifetime several of his contemporaries were moved to question his many shifts of style. The fashion during the late part of Rembrandt's life was for very finely executed paintings, but Rembrandt developed a more expressive, even coarse, way of working. This innovativeness, along with Rembrandt's shift in emphasis away from painting groups of people and towards intimate portraits, gives the paintings an emotional power that has only grown over time.

We say
In the last 20 years of his life, Rembrandt searched for a new style more expressive and profound. The exhibition, organised thematically in order to examine the ideas that preoccupied him during his final years leaves the visitor deeply moved. In the first room, "self scrutiny" the artist considers his own ageing features - frailty of his look and vigour of his painting. Other rooms explore his more intimate or introspective paintings: his son Titus at his desk, daydreaming, the apostle Bortholomew contemplating his fate. Most poignant is the work presented in the final room, entitled Reconciliation. His final painting Simeon with the Infant Christ was left unfinished at his death, maybe on purpose. 'Even three century after his death, Rembrandt continues to astonish and amaze. His technical invention and his profound insight into human emotions are as fresh and relevant today as they were in the seventeenth century' Betsy Wieseman, curator of Rembrandt: the late work.