Paco Peña - the Soul of Flamenco

As he prepares to bring his show Flamencura to Sadler’s Wells, virtuoso guitarist Paco Peña talks to Culture Whisper about flamenco and the soul of Andalucía 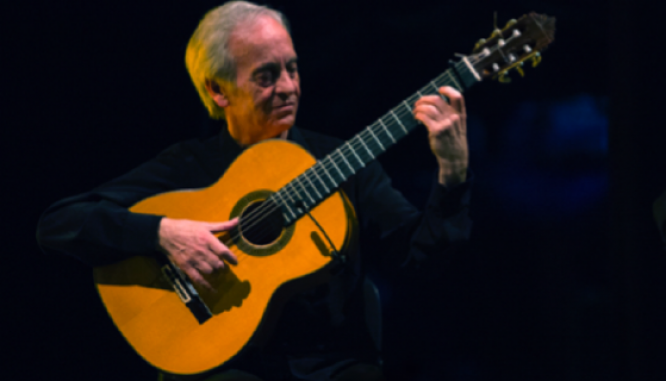 Paco Peña, photo Rita Slattery
Paco Peña is the foremost virtuoso flamenco guitarist alive today. His artistry has been recognised with a raft of international awards and fiercely loyal audiences all over the globe. He is also one of the most unassuming artists it’s ever been my pleasure to meet. A warm smile. Soulful eyes not entirely averse to the occasional hint of mischief. Eloquent hands that appear to guide his words just as they coax notes of mesmerising purity from his guitar. And an all-consuming passion for flamenco, an eagerness to draw you in, make you understand and feel. Above all, feel.

TRY CULTURE WHISPER
Receive free tickets & insider tips to unlock the best of London — direct to your inbox
We met at Sadler’s Wells, where the Paco Peña Flamenco Dance Company return in early August with Flamencura. First performed two years ago, it’s a show that seeks to put across ‘the essential qualities of flamenco (…) all that is part of a people: gypsies, of course, but also people in turmoil, in difficulties, the life that produced flamenco, the community that produced flamenco.’

Paco Peña's lifelong quest is for the very essence of flamenco, the soul of his native Andalucía. Big, flouncy shows homogenised for mass international consumption are not for him. What he looks for is precisely what gives this show its name:

‘We call it flamencura, that is, if you have grace when you’re doing your flamenco, if you go that little bit further to give the expression of flamenco, the qualities that we love about it, then you have flamencura: you are putting into your performance that extra dimension (…) It’s dealing with whatever you try to do in art, but actually achieving it with grace and an extra dimension of quality.’

The final aim is to invite in ‘duende,’ an ineffable presence that manifests itself only when performers and audience attain a state of absolute communion. ‘Duende’ is elusive, but when it descends on a performance, says Paco Peña, it’s ‘like an electric bolt,’ ‘a tremendous abandonment.’

‘We put in a lot of ourselves to achieve that.’ 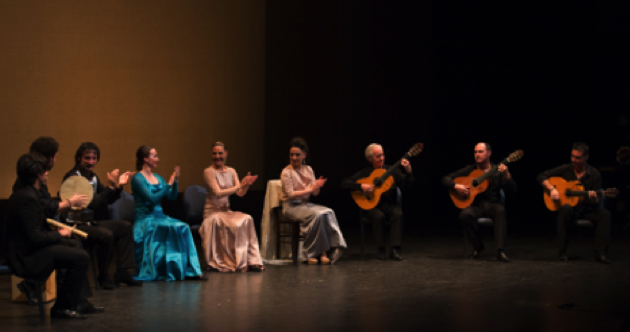 
Paco Peña’s is a relatively small company, some of whom, like the exceptional dancer Charo Espino, have been with him for a long time. All contribute to the overall performance, but to what extent are the artists allowed to improvise and react to each other in the moment?

‘Any flamenco artist is trying to surprise him or herself. What happens is, you know the discipline, the performance that you are going to do, but you want to break away, you always do. So, ideally I always want my artists to improvise.

’On the other hand, when I think of the show, I think of the idea I want to project, so that must be there. So, structures that are given and the lead that I provide are conducive to that, so both things [coexist], the structure but also the freedom to move and be yourself.’

Born in the Andalucían city of Córdoba in 1942, Peña’s slight frame wears his age lightly. Grey hair notwithstanding, his straight back and easy movement give him the appearance of a man a good ten years younger.

He moved to London in the late 1960s after a stint playing the guitar in the Costa Brava.

’In the Costa Brava I was working only an hour-and-a-half in the evening, for the rest I was enjoying myself, going to the beach, eating well, drinking…. I had money as well, the girls were all around…’ (he chuckles at the memory) ‘but the thing is, it was shallow, it was not fulfilling. When you have ambition, meaning you want to make something of your life... I thought, I’m going to change, I’m going to try to start a solo career, and I thought of London.’

On a prior visit, he was fascinated by how popular the guitar was among London audiences; here his career took off. But, just as his voice retains a soft Spanish accent, his soul remains one hundred percent Andalucían. It comes as no surprise, then, that two names that have left an indelible mark on his life and art have been those of Andalucíans: the poet Federico Garcia Lorca [1898-1936] and the unique flamenco guitarist, Paco de Lucía [1947-2014].

‘Being in flamenco you can’t avoid feeling Lorca, because his influence is very strong and some of his poetry has found its way into the repertoire of flamenco,’ he says, adding that Lorca has the ability to project the very soul of flamenco through his poetry, and besides, ‘he’s part of Andalucia, part of what I am.’

Peña ambitious 2016 show Pátrias, where he sought to explore in music and song the emotional, physical and cultural impact of the Spanish Civil War [1936-39] on his country, was his own homage to Garcia Lorca, one of the war’s most prominent victims. 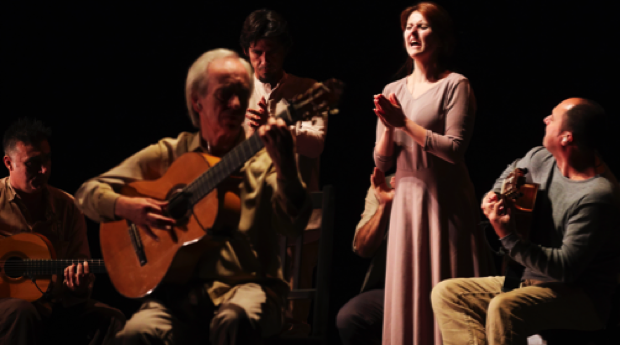 Paco Peña Flamenco Dance Company, Pátrias, photo courtesy of Sadler's Wells
As for Paco de Lucía, he was ‘just a wonderful phenomenon that happened. When I was trying to do this, artistically, professionally - you know, all artists try to do things - this younger kid (he was a bit younger than me) came and did them!’

There is still a sense of wonderment in his laugh as he reminisces. Paco de Lucía was ‘a massive genius’ but more importantly, ‘he’s gone everywhere, he’s done music of all kinds, collaborations, [but] he never deviated from the essence of flamenco, he was always pure flamenco, whatever he did - so you can only learn from that.’

Paco Peña, too, has relished collaboration with other artists and cultures. In his 2009 show Flamenco Sin Fronteras (Flamenco Without Borders) he explored the musical and cultural links between his own music and that of Venezuela, where the culture of colonial Spain mingled with the very rich pre-existing cultures.

The following year, he produced Quimeras, a meditation on migration, inspired by the plight of African migrants in Europe.

‘I was sitting in a plane and read an article by [the Peruvian writer] Mário Vargas Llosa, a wonderful article about an African woman (...) who was almost burnt to death, she ended up in Cataluña and some thugs set fire to her place and other migrants. It was such a moving article that Vargas Llosa wrote about this woman who had been travelling all her life to make a better life for herself, her family… and so I said, I want to make a show about this.'


‘I found African people and I started devising a show that would highlight the plight, the difficulties of Africans, but also show respect to their culture through the art. The result was Quimeras, which in a way is a confrontation of the two cultures, because when they arrive they find hostility, but nevertheless ultimately they contribute, we all together at the end make the show alive.’

Paco Peña has a long and illustrious career behind him. Among his many achievements, he founded the world’s first University course on flamenco guitar in Rotterdam. He has performed all over the world; the few shows mentioned in this article don’t even begin to do justice to his prolific output. He has received a number of prestigious awards, including The Gold Medal in the Arts by the John F. Kennedy Centre for the Performing Arts in Washington, and shows no sign of slowing down.

So, as he prepares to return to Sadler’s Wells, I asked him, what above all does he want his audience to take with them from Flamencura?

'A word comes to mind, which is Truth. Flamenco is a true expression of people (...) There must be that sincerity, that commitment to actually grab your attention by force. So, I believe what I do. I’m flamenco.'