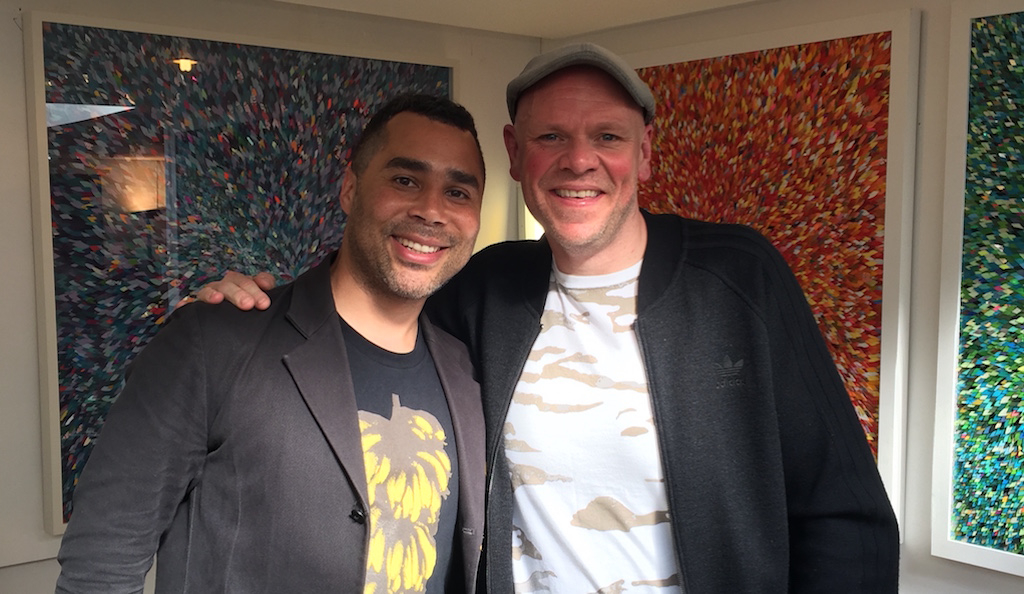 Robi Walters and Tom Kerridge
The Jumeirah Carlton Tower in Knightsbridge, best known as the hotel next to Harrods, is currently undergoing a monumental revamp. From the ground floor lobby to the roof-top bar, change is afoot. Even The Rib Room, the hotel's long-standing go-to foodie hotspot for the well-heeled Londoner, is changing hands.

The new man in charge: Michelin-starred British chef Tom Kerridge. Set to take over the space later this year, The Rib Room by Tom Kerridge will be the chef’s much-anticipated first London venture.

TRY CULTURE WHISPER
Receive free tickets & insider tips to unlock the best of London — direct to your inbox
Foodies will be well aware that Tom Kerridge runs the twice-Michelin-starred country pub The Hand and Flowers in Marlow, as well as sister restaurant, The Coach Marlow. Waiting lists for both run up to a year long and the rolling menus – at once ‘sophisticated, traditional and familiar’ – are full of surprises. Or so says his future partner in crime, contemporary artist Robi Walters. 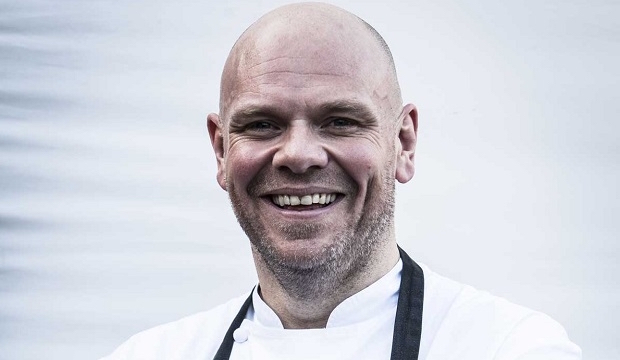 Walters and Kerridge are set to collaborate on the art hanging in Kerridge's new London restaurant. The pair join a well-established line-up of chef-artist collaborators including Damien Hirst and Mark Hix, and David Shrigley and Pierre Gagnaire. Ever since the artist-conceived restaurant sketch opened its doors in 2002, London has seen a number of artful interiors spring up, all wowing us with their playful designs. 'Good restaurants need to offer so much more than just good food now,' explains Walters, 'they need to offer a whole experience, a happy space, a starting point for a hopefully long and exciting journey.'

Originally trained as a graphic designer, Walters is now best known for his mesmerizing lotus leaf collages. His designs are eye-catching to say the least. Walters explains that they are 'based on the sacred geometry and energy circles at the heart of the chakra system’ – Walters meditates every day and has done for eighteen years. The 'overlapping circles of the lotus shape have an energetic feel to them', he proceeds, 'they re-calibrate the room and the space the work's hung in'. It's true. His studio has an unearthly sense of calm about it, despite its rather haphazardly organised interior – works in progress, piles of papers and finished pieces nestle against each other side by side in no apparent order. 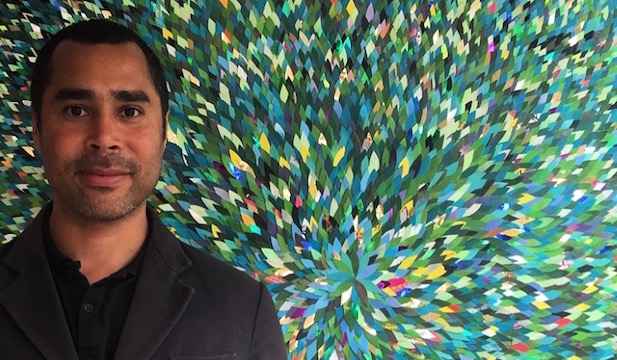 It would seem that Kerridge and Walters are worlds apart. Kerridge derives his culinary inspiration from tradition, history and heritage while Walters’ derives his artistic inspiration from waste, recycling and environmental sustainability – each of Walters' brightly coloured, multi-textured designs is largely made by hand out of predominantly recycled materials (each leaf is cut out by Walters, or one of his dedicated team, which includes his mother).

But their shared love for transforming the old and disregarded into ‘something new and beautiful, whether that be the appropriation of an old recipe by Kerridge or an old pre-loved birthday card by Walters, unites their diverging worlds. This is how.

'A few months ago', Walters explains, 'someone called into The Hand and Flowers carrying a big folder of old menus asking if Kerridge wanted them. From a chef's point of view, it was fantastic', Walters adds on behalf of Kerridge, 'menus represent both history and heritage; they are a tangible way of seeing how dishes have developed over time.' But rather than keeping the menus for posterity, Kerridge commissioned Walters to create two new works of art, two dining tables and a series of plates from the menus for his new London restaurant.

But unlike most artist-conceived restaurants, Walters did not have ultimate say over the artworks' designs. Adamant that this collaboration would be a collective effort, Kerridge put out a call on social media requesting his followers to send in old menus that Walters could use for his new works: 'They can be from your restaurant, from places you have eaten, or even your local takeaway ones, as long as they have meant something to you.' 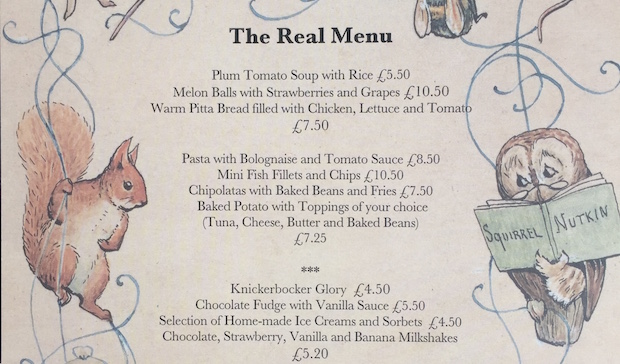 Menu sent in for the #FoodMemorySoul Collaboration © Culture Whisper

Walters and Kerridge hope the collaboration will trigger discussion, debate, and, above all new memories. ‘Food brings people together’, Walters adds, 'There are always stories, people remember when they went to this, or where they did that'.

'It’s like my art', he says ‘if you look at it from a distance you might just think it’s a piece of art with no story behind it, but when you look more closely, you will spot a word from a flyer or in this case an old menu I've used in the collage and think – what’s that, where's that from, who ate there and who were they with?' This sense of surprise ‘creates conversation. It gives weight, something to talk about. It starts bringing heart and soul and warmth into the restaurant.’ It seems the perfect collaboration.

For both Kerridge and Walters, the food, the space and the interiors are crucial for The Rib Room's success. Although little is known yet about the menu or the restaurant's interior design, Walters lets slip, that ‘there’s going to be some magnificent wine cabinets made of wood. Everything’s bespoke – he’s having everything made.’ Even the plates will be hand made. 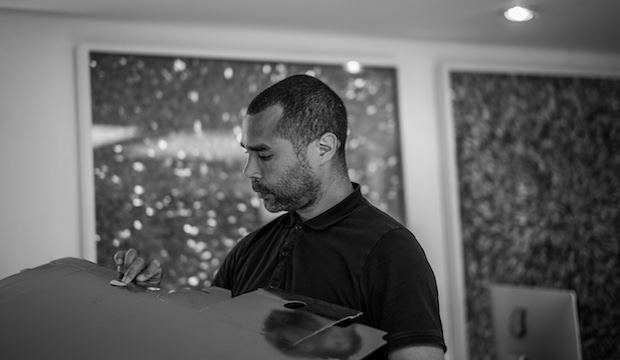 Walters explains what he means, 'every now and again the team are going to throw an artist designed plate into the mix of generic white ones'. Walters is currently designing a prototype, which is made out of predominantly white lotus leaves spattered with bronze and blue leaves. It's a soothing palette. 'You could be sat at a table of four and three of you have got the same white plate, but someone is lucky enough to be eating off a Robi Walters designed plate’. It’s clear that both Kerridge and Walters want to defy expectations with this new collaborative project all about ‘surprise, surprise, surprise!’

The Rib Room by Tom Kerridge will be so much more than just a good restaurant with glitzy, artsy interiors. It will be a space with a collaborative story of friendship at its very core. Waiting lists for Kerridge’s newly revamped Rib Room are expected to be long as a result. But whether you’re lured in by the Michelin-starred food, which Walters confirms is going to be reasonably accessible in price, or the world-class art on the wall, which will also be accessible to view on YouTube in their 3 part video series documenting their collaboration, it will be a space that triggers exchange, storytelling, and memories.

Walters concludes by emphasising his pride in being involved in such a collaborative project; 'I don’t take it lightly. It’s very precious and I want to do the best I can with these peoples' memories’. 'Send me your menus', he finishes, 'I've not yet finished sifting through them'.

Walter's excitement is palpable, and so is ours.

The opening of The Rib Room by Tom Kerridge is still to be confirmed, so watch this space.