The Way of the World, Donmar Warehouse review: ★★★★★

TRY CULTURE WHISPER
Receive free tickets & insider tips to unlock the best of London — direct to your inbox
Vivid characterisation and a surfeit of wit makes The Way of the World one of the most enduring and rewarding Restoration Comedies. The mind-boggling plot is stuffed with affairs, legal complexities and marvellously quotable quips. We follow young lovers Mirabell and Millament. All that stands between them and marriage (complete with its six thousand pound dowry) is Mirabell's man-hungry aunt, Lady Wishfort. Greed and gain battle with genuine affection in astute satire as the lively ensemble cast get increasingly embroiled.

William Congreve virgins won’t understanding everything being discussed on stage. But The Way of the World is essentially a funny seventeenth century soap opera, and a perfect understanding of all the narrative complexities isn’t a prerequisite to enjoyment. At any rate, director James Macdonald’s helps the audience along with excellent little comic asides; the timely raise of an eyebrow, a pitch-perfect pout and a helpful little whisper to the audience elucidate the goings-on.

Haydn Gwynne wows as the high-octane and (as her name suggests) sexually rambunctious Lady Wishford. She rushes about the stage in more bows than a christmas tree, furiously fussing about her wrinkles, potential lovers and double-crossing relatives. Justin Mitchell gives us an indecisive Millament with so much sass and unfazed bluntness that the audience titters whenever she wonders onto stage. They are joined by Sarah Hadland, who sounds exactly as she did in Miranda.

Before now, the most notable recent revival was Lyndsey Turner's trendy modern dress production at the Sheffield Crucible (2012). How pleasing that Macdonald's production takes us back to the world of beauty spots and the language of fans, and yet can still captivate a modern-day audience.

by Helena Kealey and Lucy Brooks 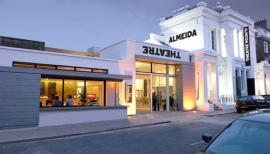