'The writing’s not on the wall, it’s on the floor' – Conundrum at the Young Vic disappoints

Conundrum, Young Vic Theatre review 2 Conundrum, Young Vic Theatre review Holly CW
This is a play about racism, specifically condemning systemic institutional discrimination. Yet this play’s creation feels like it is fuelled by the systemic institutional discrimination of British theatre. Why? Because British theatre predominantly only allows for black writers to write about black trauma. Conundrum is being performed at the Young Vic, a theatre that has championed POC for decades at this point, and provided a platform for a kaleidoscope of stories and experiences. So, it is slightly surprising that they have commissioned a play that is almost purely didactic with little nuance on the devastating effects of black trauma, and a lack of clarity in the storytelling.

We meet Fidel, who is decluttering his house, sifting through old bank statements, electricity bills, and rejection letters from multiple medical establishments saying he is overqualified, overqualified and you guessed it, overqualified for the job. Writer and Director Paul Anthony Morris loves repetition and uses it throughout the piece. Fidel finds an old school diary and is transported into significant moments in his childhood where he discovers that the colour of his skin matters more to the powers that be than his intellectual acumen. These discriminatory events tattoo themselves upon Fidel’s brain, and kickstart his descent into anguish, agony and despair. 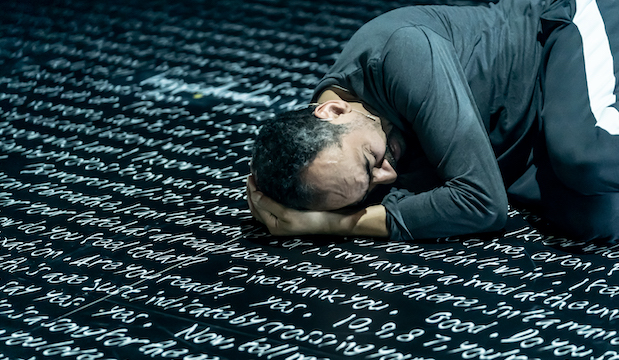 As the main theatrical component, Anthony Morris uses the classic troupe of ‘mad man who is not mad’, a figure desperately scribbling on the walls with any pencil, chalk or flint they can find. But this time the writing’s not on the wall, it’s on the floor. Using white text on a black chalkboard-like floor, set designer Sean Cavanagh has written out large sections of the script, which Fidel writes over and erases, writes over and erases. The effect? Well, there isn’t one really. It’s such a cliché that as you walk into the theatre you already know this is going to be a story about someone driven insane, most likely by institutional forces.

Actor Anthony Ofoegbu gives the piece his all, to the point where it can become a bit hammy. This is because he is trying to work a script that isn’t producing the goods. His performance is at times poignant, always energetic and he is a great mover, facilitated by choreography from Shane Shambhu. But for all his effort, Ofoegbu can’t save this piece. 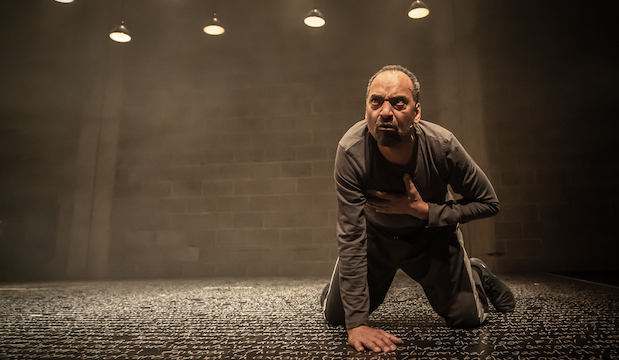 Lighting design from Jack Weir is nuanced and dynamic, but there is an innate problem when you as an audience member are more engaged with the lighting changes than the (lack of) action on stage.

The inherent issue with Conundrum is that we understand Fidel has been deeply traumatised by his experiences of institutional racism, but we don’t understand him personally. He keeps repeating 'I know who I am'. But we don’t. We have little to no comprehension of who he is now, what he does day to day, who he spends time with, bar the fact he is going to meet his elderly father the next day who he clearly loves.

Yes, it’s important to bear witness to racism in all its guises on stage, but when you come out of the theatre having learnt nothing new, felt nothing new, seen nothing new, you begin to wonder why you didn’t go to Best of Enemies, the 5-star show in the Young Vic’s second theatre space. That’s the conundrum. 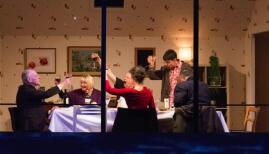 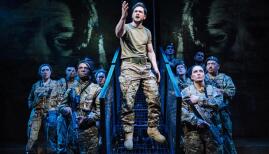