What's in a name? Everything, when Elsa falls for a mysterious stranger in Wagner's romantic opera. Jennifer Davis reprises a landmark role in this revival of David Alden's production

A graduate of the Royal Opera's talent-spotting Jette Parker scheme for young artists, she is now the go-to Elsa in opera houses across Europe – Stuttgart, Antwerp, Berlin – and wider horizons surely beckon. Now she is back at the Royal Opera House where she made her name, again in the role of Elsa.

It is Davis's combination of strength and sweetness that make her a perfect fit for this character. In a jittery society with war in the air, she is on a trumped-up charge of fratricide, reliant on a man to represent her cause, and, ultimately, tricked into losing the brief happiness she gains. 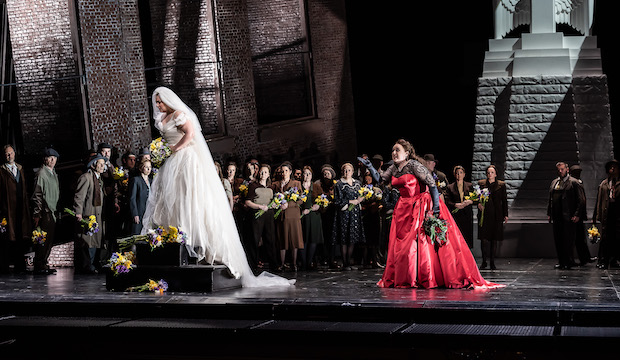 Her Swan Knight is the mysterious stranger who comes to her aid, and it is love at first sight. But their marriage is blighted by a curious covenant: Elsa must never ask the name of her saviour. Ortrud, the vile wife of the powerful man Elsa has earlier rejected, and a character who makes Lady Macbeth look like Mrs Tiggywinkle, cons Elsa into asking the forbidden question. Russian mezzo-soprano Anna Smirnova received a huge ovation on first night for her terrifying Ortrud. Audiences do not blame artists for the actions of their country.

Stand-out moments in Wagner's opera are the arrival of Lohengrin himself in a swan-drawn craft, and the marriage ceremony, from which the March is heard at weddings to this day. Tal Rosner's video design projects wing beats across the whole stage, and the wedding begins with guests flooding awe-struck into the auditorium, as if arriving at the place of ceremony, and the couple dashing excitedly up the aisle. 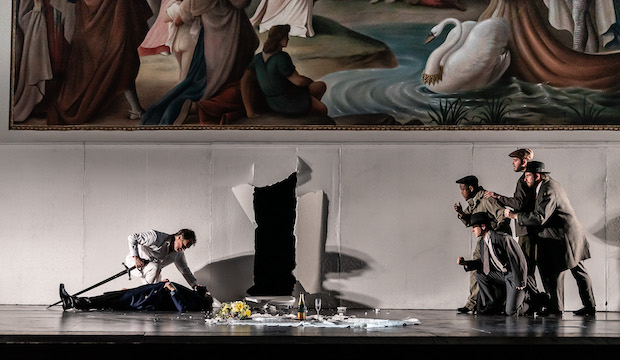 Jakub Hruša conducts the Orchestra of the Royal Opera House and magnificent Royal Opera Chorus, these giant forces attentive to the luminescent detail in Wagner's score as well as to its overwhelming scale.

The opera comes packed in cultural history. It was first performed in Weimar, Germany, on the birth date in 1850 of the German poet Goethe, at the request of the premiere's conductor, the composer and virtuoso performer Franz Liszt. Wagner himself was in exile after political action in Dresden, and did not hear a first performance until 1861, although he conducted extracts himself in the intervening years. The opera was first staged at Covent Garden in 1875.

Especially in light of current events, Alden's pseudo-Nazis feel a fraction tired: Germany, like all lands, has been a different country (the Swan Knight legend goes back centuries), and is different again today. But this is a wonderfully sung revival of a spectacular production, and an action-packed gateway to Wagner.

Lohengrin is sung in German with English surtitles. It is a co-production with Opera Vlaanderen, Belgium. Further performances are on 24, 27 April; 1, 7, 11, 14 May 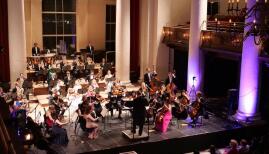 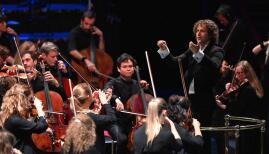 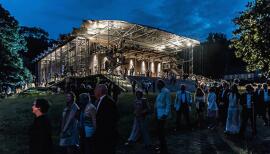 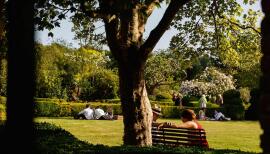