The stars of the future light up the stage of the Royal Opera House in the third live concert, streamed to subscribers

With each week, the live concerts from the Royal Opera House have called more and more performers on to the stage. The house is empty, as hollow as our hearts are full, reminded of what we are missing. But one by one, more and more musicians have congregated carefully, adding layers of musical possibility – and hope.

Each concert has increased in range, too, not only in sound colours, but in the range of human emotions re-awakened. Those emotions are not confined to the characters on stage. At home you could only feel optimistic for the middle-distant, if not the immediate, future of brilliant rising singers chosen to develop their careers on the coveted Jette Parker young artists scheme and given the lion's share of this third live streamed concert.

British mezzo-soprano Stephanie Wake Edwards singing the muscular Handel 'Where Shall I Fly?' will have a delicious time dispatching enemies one day in other Handel operas and generally storming across the repertoire. I bet she was everyone's first choice when they were picking teams at school.

Kinshasa-raised bass Blaise Malaba ended up in the 2015 Cardiff Singer of the Year almost as a sideline in his life of music and undergraduate study. He has already sung with the ROH in Susanna, and begins his tenure on the scheme shortly. His effortlessly big voice and personality demonstrate his promise. 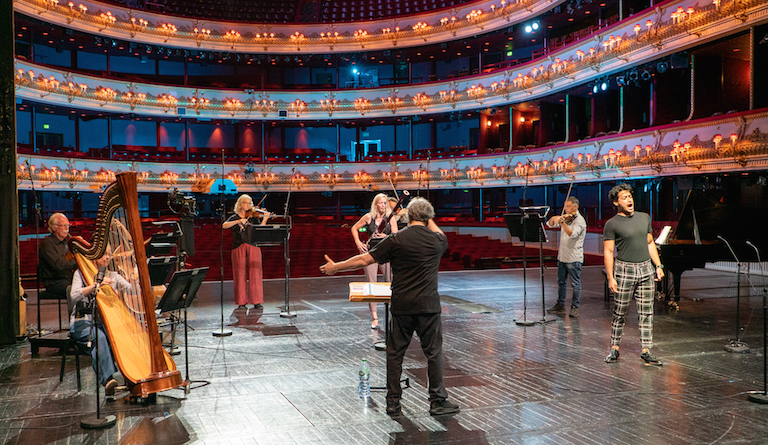 Born in Australia, raised in New Zealand, Tongan by ancestry, the exciting young tenor Filipe Manu singing 'Una furtiva lagrima’  from Donizetti's L’elisir d’amore is at home in the lush Italian repertoire and surely has an assured future in 19th-century verismo, with its energy and heart. You could almost pick out of the faces of composers Puccini and Leoncavallo beckoning from the wings. They want Filipe Manu on their team too.

When Masabane Cecilia Rangwanasha sang the title role in Handel's Susanna, she was let down by a daft costume and did not prove a natural Handelian soprano. But letting rip in Alfredo Catalani's ‘Ebben? Ne andrò lontana‘ from La Wally – and in a gorgeous flame-orange concert dress – she was every inch a star.

Chamber music is usually created by players working together, watching, listening and responding, without a conductor. So in an arrangement of Bach's Concerto for Two Violins, featuring Vasko Vassilev and Sergey Levitin (violins) and Patrick Milne (harpsichord) plus strings, to have ROH music director Antonio Pappano conducting looked a little odd: these players can literally pull off this stuff with their eyes closed. But it recalled the palmy days when Pappano had a large orchestra before him, and it's worth being reminded of what to look forward to.

The ease with which just three of these musicians, Pappano, Vassilev and cellist Christopher Vanderspar, filled the house with music in their Mendelssohn trio slow movement demonstrates that, as happens from time to time, the Royal Opera House is a great concert venue. While question marks hang over the logistics of singing with several or many others, there are wordless songs aplenty in lines played as beautifully as here.

The Italian minimalist composer Ezio Bosso died in May aged only 48. Principal Matthew Ball and First Soloist Mayara Magri performed a pas de deux from Christopher Wheeldon’s Within the Golden Hour to Bosso's score. Music director of the Royal Ballet Koen Kessels conducted a small orchestra in this elegant tribute to one lost talent, amid a sea of talent still forming.

This third Live from Covent Garden concert follows the free concert on 13 June, and the first event streamed to subscribers (20 June) featured Mahler's Das Lied von der Erde and ballet highlights. View for £4.99 via YouTube and Facebook. Royal Opera Live is part of the ongoing #OurHouseToYourHouse streaming programme. Click here for details of other current and upcoming performances 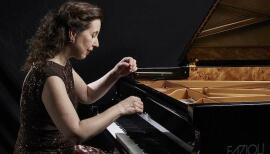 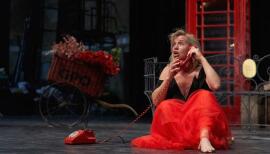 The best opera and classical music to enjoy at home this autumn
Sign up to CW’s newsletter
By entering my email I agree to the CultureWhisper Privacy Policy (we won`t share data & you can unsubscribe anytime).