Opera North's production of Brecht/Weill's The Seven Deadly Sins, streamed live from the Leeds Playhouse, is a musical delight

For its first fully staged show since the start of the Covid pandemic, Leeds-based Opera North picked the short, punchy The Seven Deadly Sins, the last major collaboration between the composer Kurt Weill and the playwright Bertolt Brecht. Both were refugees from Nazism, and the work premiered in Paris in 1933, described as a ballet chanté (a ballet with songs).

It’s a morality play dressed up as cabaret, a typically savage denunciation of corrupt society, where making lots of money trumps everything else.

The Seven Deadly Sins follows Anna on her travels through seven American cities in pursuit of a fortune for her family. Each city is matched with one of the deadly sins: envy, gluttony, greed, lust, pride, sloth and wrath. 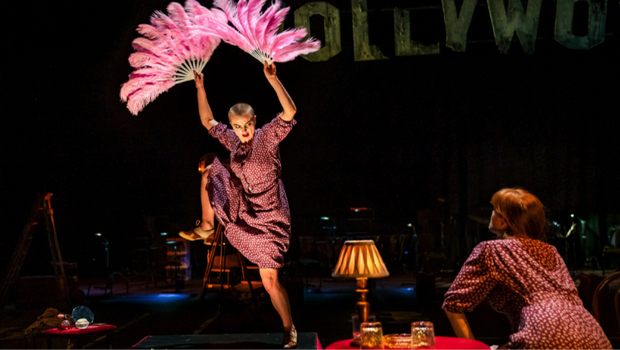 Shelley Eva Haden and Wallis Giunta in Memphis/Pride in Opera North's The Seven Deadly Sins. Photo: Tristram Kenton
The role of Anna is split between two performers who travel together as one: a singer, the worldly Anna I, and a dancer, Anna II, a naive young woman, who hopes to get her money without indulging in any of the seven deadly sins. As Anna I explains, she’s ‘the smart one’ whereas Anna II, interpreted by the dancer Shelley Eva Haden, is ‘the one with the looks’. However, she adds, ‘there’s only one of us’, thus highlighting the struggle between instinct and morality in every human being.

A slightly claustrophobic sense pervades Opera North’s new production. A superb 15-piece orchestra, conducted by James Holmes, shares the stage with the two Annas and a small chorus of four representing the Annas’ greedy and immoral parents and brothers.

Musically this production is a triumph. The Irish-Canadian mezzo soprano Wallis Giunta is a compelling presence, perfectly adapting her warm and expressive operatic voice to the demands of cabaret singing (the very first interpreter of the role was Lotte Lenya).

Giunta’s diction is perfect, allowing us to discern every word of Michael Feingold’s excellent English translation, though subtitles are provided.

On a very dark stage, the two Annas move between small spotlit stages marking each leg of their journey from Louisiana to San Francisco and back. While Anna I sings the story, Anna II dances it, egged on by Anna I to ever greater money-making debauchery.

Gary Clark’s choreography is problematic, though. The intention to provide movement that underlines the grotesque demands put on Anna II is clear and makes sense; but with weak and unimaginative choreography (there are only so many cartwheels and crouches you can take) Anna II is made to play a weak second fiddle to Anna I when, really, they should be equal in terms of presence. This production of The Seven Deadly Sins is less 'a ballet with songs', more 'songs with background dancing'. The songs part, though, is glorious.

For a work that due to Covid restrictions could only be streamed to our small screens, even though it was performed live on stage at the Leeds Playhouse, perhaps a little more attention could have been paid to the lighting. Deep darkness as background may well work on stage, but definitely hinders enjoyment when seen on the small screen, which lacks the depth and definition of a proper three-dimensional stage. At times it felt as though we were looking into an unfathomable black hole.

Still, Opera North is to be applauded for finding a way to work within the Covid-necessitated restrictions, and coming up with a professional, mostly very enjoyable production.