After a massive hit, composer Pietro Mascagni set about his difficult second opera. A new production shows how he fared...

L'Amico Fritz, Opera Holland Park review 3 L'Amico Fritz, Opera Holland Park review Claudia Pritchard
In 1890, Pietro Mascagni wrote his first opera at white-hot speed to beat the entry deadline for a competition for one-act operas. (The composer was always a fast worker. His first son was born the day after his wedding.) He won the competition and the opera was a huge hit at its première in Rome.

Within a year, Cavalleria Rusticana was being performed everywhere from St Petersburg to Buenos Aires, and Mascagni was an international sensation. He was 26.

As any rock band will tell you, the problem with having a global hit is – how do you follow it?

Mascagni’s solution was to make his second opera, L’Amico Fritz, as different from Cav as possible. Where Cav is passionate, violent, tragic and on a grand scale, Fritz is gentle, folksy, small-scale and has a happy ending.

Where Cav is set in Sicily, Fritz draws its local colour by being set in Alsace (hence the Germanic names of the characters). Cav’s showstopper is the ‘Easter Hymn’ sung by a huge chorus; in Fritz, the chorus sings little and offstage. Cav has an outstanding libretto, taut, every scene crackling with tension; the libretto for Fritz is rubbish. 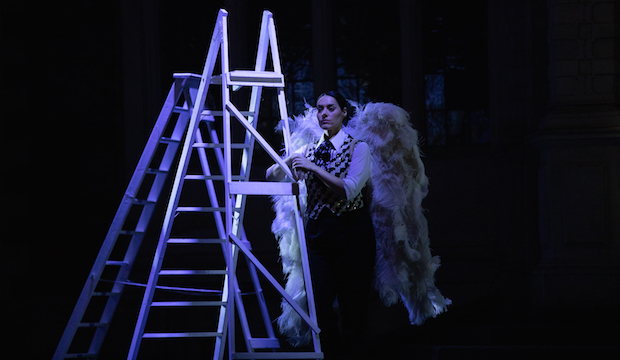 Fritz, a wealthy bachelor, is celebrating his 40th birthday (which in 1890 must have been the new 60), telling his friends that, not only is he happy being single, but he doesn’t understand why anyone wants to get married. The 17-year-old Suzel, the daughter of one of his tenant farmers, is brought in to present him with some birthday flowers. They decide to marry.

Sorry, I skipped a bit. But, despite following director Julia Burbach’s stripped-back staging for Opera Holland Park as closely as I could, this was all that I could be sure of by the end of the performance. Further study reveals that, what plot there is centres on how Fritz and Suzel overcome the many obstacles to their love.They are from different generations, different classes and Suzel’s father wants her to marry someone she doesn’t love.

What does a director do when faced with a plot which, to 21st-century eyes, looks more puzzling than a Handel opera full of magicians and dragons? Burbach goes for a semi-abstract approach which removes all trace of age and social distinctions between the lovers, making Fritz’s reluctance to propose to Suzel for three acts incomprehensible.

The opera’s most famous piece is the ‘Cherry Duet’, a Pavarotti favourite, during which Fritz falls in love with Suzel as he watches her climb a ladder to pick cherries on her father’s farm. Burbach falls on this stage direction and we’re given seven or eight step ladders, painted white, dotted around the stage. Sometimes singers climb these ladders. Sometimes they don’t. Most of the time, they just wander around, looking at each other as if to say, 'Who’s turn is it to climb the ladder?'

They mime opening doors that aren’t there and point to invisible glasses of water, non-existent cherry blossom and a group of children which only they can see. Cherries are there none. 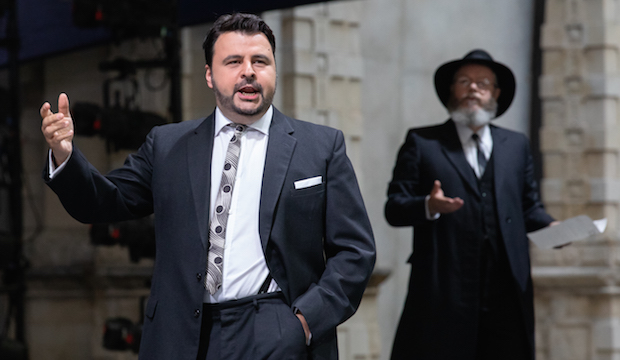 Beatrice Venezi conducted the City of London Sinfonia (like all the operas this season, with reduced numbers for a reduced orchestration) with a wonderful Italianate warmth but without managing to raise the temperature on stage. When a gypsy violinist first enters, he serenades Fritz’s party guests with an extraordinary mini concerto, thrillingly played from the pit by the Sinfonia’s leader, Martin Burgess.

Katie Bird’s Suzel was beautifully – but carefully – sung until after the interval when her voice opens up to reveal a thrilling top register. Matteo Lippi as Fritz sang gloriously and tirelessly throughout, delivering a ringing top B flat from atop a ladder. The baritone of Paul Carey Jones as the jolly Rabbi easily filled the theatre and Kezia Bienek, in the trouser rôle of the gypsy violinist, good-humouredly donned a pair of Cupid’s wings and stage-managed the proceedings.

Rose Stachniewska as Fritz’s housekeeper has a lovely lyrical soprano which I would like to hear more of, and Themba Mvula from Zambia made a promising OHP debut as Hanezò with a relaxed, attractive stage presence.

Opera Holland Park should refer to 2021 as its Miracle Season. It was a miracle that it happened at all, given the Covid restrictions that it had to work under, and that it managed to mount four productions: The Marriage of Figaro, La Traviata, The Cunning Little Vixen, and L’Amico Fritz, plus many other events.

Its new runway designed by takis allows the singers to come in front of the orchestra and sing in the laps of the audience: it may have stumbled on a new way of staging opera. It reduced the number of seats to a socially-distanced 400 and it decided to keep its word (a quality no longer valued in this country) to its audience and not squeeze in extra seats when social distancing is no longer legally required. This is a company which earns its miracles.

L'Amico Fritz is sung in Italian with English surtitles. Click here for tickets
by Séamus Rea 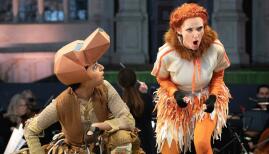