The west London company performs live to audiences again, with programmes for all tastes performed by the country's finest singers and players

In Heart's Delight at 6PM on Friday 7 August, Yvonne Howard, John Savournin, Fflur Wyn, Robert Murray and Alison Langer are joined by players from the City of London Sinfonia, conducted by John Andrews. He has devised a cocktail of high points from the comic operas that sparkled on the stages of Vienna, Paris and London.

As conductor of the highly successful and award-nominated five-star Il Segreto di Susanna, Andrews is sure to have invented a delicious concoction. Click here for more details.

At 6PM on Saturday 8 August, which would have been the closing night of this year's cancelled season, you can catch an amazing line-up in a concert entitled Opera Holland Park in Concert: The Encore. Natalya Romaniw, Jennifer France, Nardus Williams, Anna Patalong and Grant Doyle are among the artists appearing with conductor Matthew Kofi Waldren and City of London Sinfonia players. The evening is made up of favourite operatic arias. Click here for more details.

And for families and those who prefer a relaxed occasion, The Pirates' Return is the title of a specially adapted performance of Gilbert and Sullivan's comic opera, The Pirates of Penzance. The relaxed event (Sun 2 Aug, 4PM) is based on a family production that toured the country's communities, schools and care homes. For more information click here. 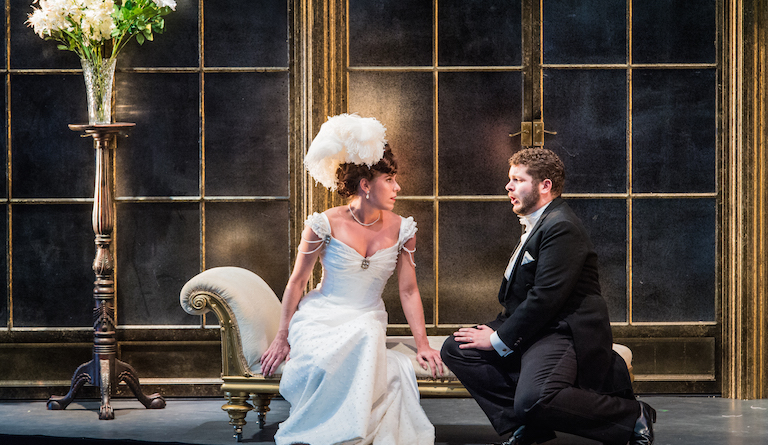 La Traviata, seen here with Lauren Fagan and Matteo Desole, is to be revived by OHP in 2021. Photo: Robert Workman

While Opera Holland Park had to cancel this year's season, it's full steam ahead for next summer. Opera Holland Park 2021 will open on 1 June with new productions of Mozart’s Le Nozze di Figaro, Janácek’s The Cunning Little Vixen and Mascagni’s L’Amico Fritz. There will also be a revival of the company’s hugely successful 2018 staging of Verdi’s La Traviata.

The company still hopes to mount the 2020 productions , including Tchaikovsky's Eugene Onegin and Verdi's Rigoletto, at a later date, as the pandemic and artist schedules allow.

In the meantime, a live recording of a concert of opera arias made on 4 July is being made available to opera-lovers now. By becoming a subscriber, and so supporting the future of the company and the many musicians and other creatives it supports, you can be given first access to the film. Click here to find out more about subscribing.

Booking for all concerts opens at 1PM on Wednesday 29 July. Click here for more details
by Claudia Pritchard