7 CW readers are interested
Review: 'Tove Jansson', Dulwich Picture Gallery 4 Review: 'Tove Jansson', Dulwich Picture Gallery Frankie Crossley
‘It was hugely important to Tove that she be recognised as a talented fine artist in addition to being the creator of the Moomins. Balancing her painting and her other projects alongside the demands that the Moomins made of her was something she struggled with all her life.’ – Sophia Jansson, Tove Jansson’s niece, creative director of The Moomins

In 1928, when Tove Jansson was 14, she wrote in her diary, ‘I look forward to the day when I can help mother drawing’. A year later, 15-year-old Jansson was producing anti-war caricatures for political satire magazine, Garm.

Almost ninety years later, Jansson is known all around the world for creating the whimsical world of The Moomins.

The fairy tale family of hippopotamus-like cartoons have captured hearts and imaginations since Jansson wrote and illustrated their first story in 1945. However, one great loss in this success is that these loveable creatures have all but eclipsed work as a graphic illustrator, painter, and political cartoonist.

While Jansson’s children’s stories are celebrated, most recently in Adventures in Moominland at the Southbank Centre, the extent and variety of her art remains overlooked. 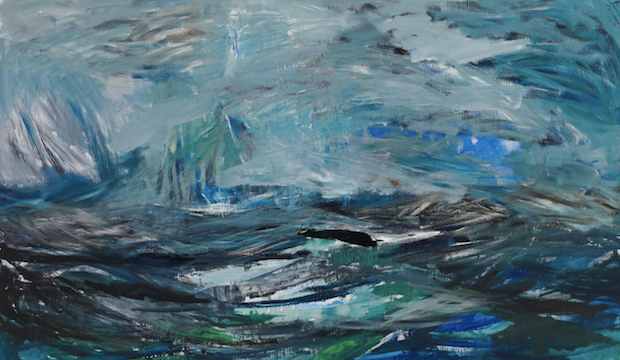 Tove Jansson was, by all accounts, a badass as well as a powerhouse of talent. She drew satirical depictions of Hitler during World War II. She grew up gay at a time when homosexuality was illegal, and she even intimated this in her children’s stories (think: Thingumy and Bob are a lesbian couple). She eventually ended up spending her summers on a remote island called Klovharu with her partner, Tuulikki “Tooti” Pietilä.

The exhibition becomes increasingly family-friendly, opening with satire and self-expression and ending with mystical stories.

Starting with two rooms consisting of works she painted before, during, and after the Second World War, the subject matter varies from landscapes to family and self-portraits. Jansson’s penchant for storytelling nonetheless runs rampant throughout the works, as fairy-tale aspects permeate the atmosphere of her surrealistic paintings.

Her self-portraits are particularly interesting. Her Lynx Boa (Self-Portrait) painted in 1942, shows us Jansson as a confident young woman with slanted cats eyes. Later, we see her familiar, broad brushstrokes repeated in Self-Portrait (1975), where her catty eyes are bigger and seem less focused. This was her last ever painting, completed when she was sixty-four. It shows her shifting self-image and accumulated wisdom alongside the broad range of techniques she developed over the course of her career.

After two rooms of paintings, the exhibition moves on to showcasing Jansson’s work as a cartoonist and author. 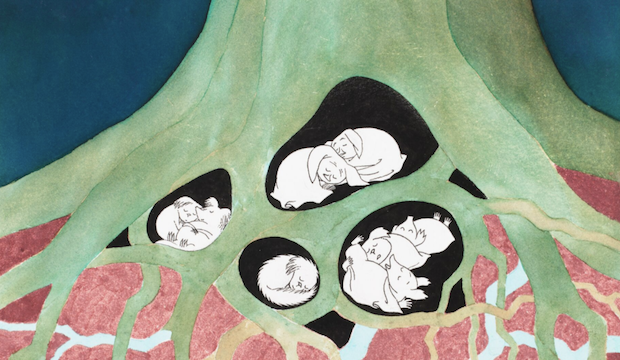 The shift in medium is reinforced by a tiny Moomins reading room, complete with a set of Jansson’s books alongside plush beanbag chairs. It’s a lovely location for little ones to sit and study the artist’s extensive contribution to children’s literature.

The third room consists of her classic book illustrations; Jansson illustrated the Swedish edition of The Hobbit, Alice in Wonderland, and The Hunting of the Snark. Her preliminary ink and pencil sketches are a treat for any bibliophile familiar with J.R.R. Tolkien or Lewis Carroll. The fourth and fifth rooms contain her work on the Moomins stories and cartoons. A series of never before seen Moomin drawings discovered at the British Cartoon Archive earlier this year feature, as do Moomin figurines that date back to the 1950s.

After progressing through the exhibition, the emotional charge behind the Moomins becomes all the more apparent. The raw passion of the tempestuous seas and the tender renderings of her ex-lovers alongside her politically charged cartoons create a complex portrait of a tormented artist.

Although snuggly trolls might not seem like the most obvious battleground to negotiate politics and identity, they are the most appropriate: the universal themes of love and acceptance are easy to project on the lovable characters, as their immense popularity has proven. But the love of Moomins comes at a price; Jansson was constantly trying to distance herself from them, and when you stare at the breadth of her work, it’s easy to see why. The artist was ultimately reduced to children’s literature, and it’s difficult to say if this kind of marginalization would have occurred if Jansson had been born a man. 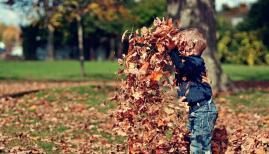