How to celebrate Thanksgiving in London

Thanksgiving is one of the best holidays: delicious food, family time and an emphasis on gratitude, not stuff. Here's how to celebrate this American holiday in London 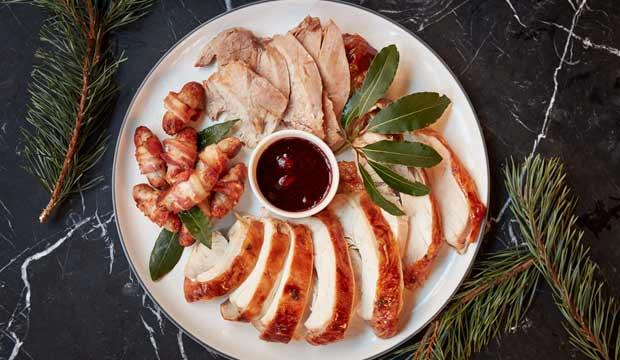 Thanksgiving deliciousness from Bread Street Kitchen
Thanksgiving, which falls on Thursday November 28th, this year, has nothing to do with the UK, but this day of feasting and football has an undeniable appeal for Londoners, too.

Thanksgiving doesn't involve stuff; instead, it's a celebration of gratitude, a uniting of family and a reminder of all of the things we have to appreciate in our lives: food, home, friends, love... it's a fantastic holiday to celebrate with the little ones. And there's really good food, too. Unlike in the US, where Thanksgiving is a four-day weekend (and you're prepping, cooking and cleaning for much of that time), Londoners can dip in and out of the holiday, enjoying the good parts (pumpkin pie!) and abandoning the less-fun ones (cooking all day when you don't have to). Here are some great ways to get into the Thanksgiving spirit this season - and you don't even need a turkey to do it. 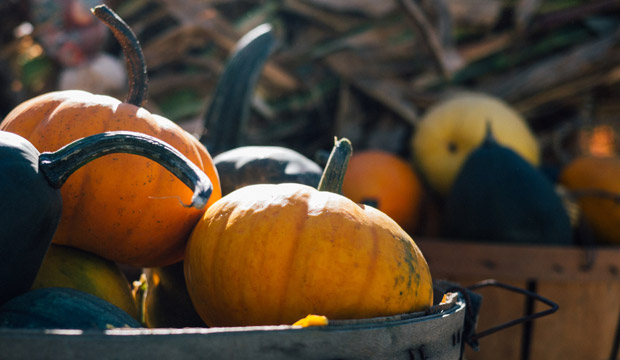 Part of what makes Thanksgiving such a gorgeous holiday is that it's all about embracing autumn: the colours, the foliage, the veg. Pumpkins have a shelf life long beyond Halloween, and the various pick-your-own farms around London also have vibrantly coloured and fabulously shaped squash to help you decorate your home in Thanksgiving-style. All those pinecones your kids pick up every time they go to the park? Also ideal for a Thanksgiving harvest decor scheme with minimal effort. 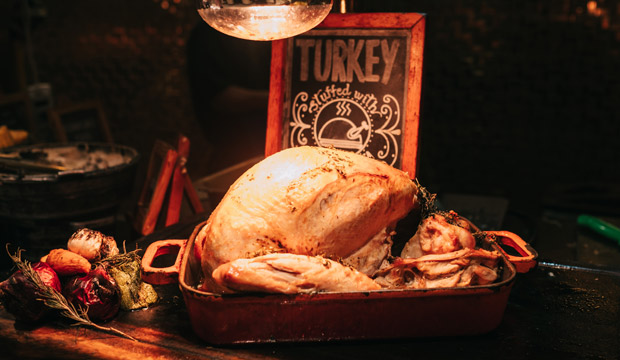 Thanksgiving is a holiday centred around food - and oh, what glorious food it is.

Turkey is the main event and Americans in London like to order theirs from Partridges - in fact, the shop's American foods section is rather handy for the occasion with Pepperidge Farm Herb-Seasoned Stuffing, Libby's Tinned Pumpkin Puree, Ocean Spray Cranberry Sauce and Keebler Graham Pie Crust. You can also pick up one of their delicious pumpkin or pecan pies (or one of each, perhaps?).

Ocado is another spot with a good American selection, and, crucially, various marshmallow varieties - a must for sweet potato pie dishes (sides are everything on Thanksgiving, so you'll also be making creamed corn, green bean casserole, cornbread, bacon Brussels sprouts, creamed spinach, stuffing - or some variation on that theme). You can also get frozen turkey crowns there, an easier (and cheaper) option for a quick Thanksgiving meal. Whole Foods is another favourite when it comes to turkey, all the trimmings and amazing pie. The most important ingredient? People you love - Friendsgivings are all the rage in the US. 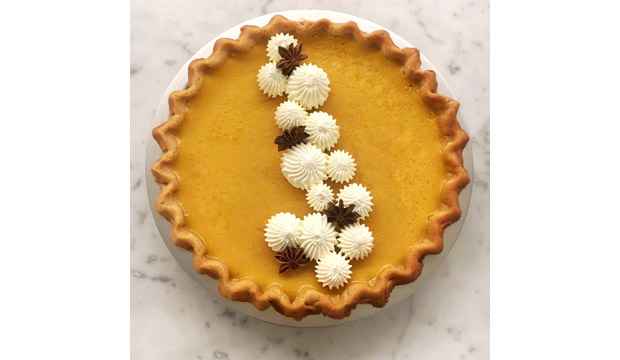 Pie is the best bit of the Thanksgiving meal, and a traditional Thanksgiving dinner won't have one pie, but several (pumpkin, pecan and apple are all favourites). The good news is, Dominique Ansel Bakery in Belgravia has the most divine Thanksgiving pies you could dream of, for just £6.25 a slice (takeaway) or £32 for a whole pie. Choose from Extra Silky Pumpkin Pie, with hand-crimped gingersnap crust and triple-strained, ultra-smooth pumpkin custard, or Bourbon Pecan Pie, with brown sugars, molasses, whole toasted pecans and a vanilla sablé crust. These are available from 15th-29th November - mark your diaries now. 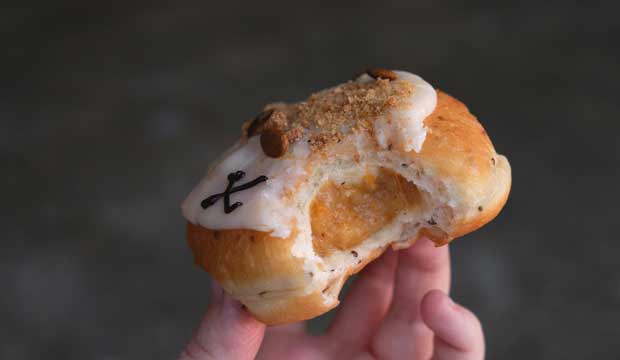 A Thanksgiving themed doughnut from Crosstown

You can enjoy Thanksgiving dessert with a vegan twist courtesy of Crosstown Doughnuts: their Spiced Pumpkin doughnut is inspired by the pumpkin pie, made from vegan sourdough with a homemade spiced custard, pumpkin glaze and cinnamon and pumpkin seed crumble. Available from October 31-November 29 for £4.50 (or £34 for a box of 12). 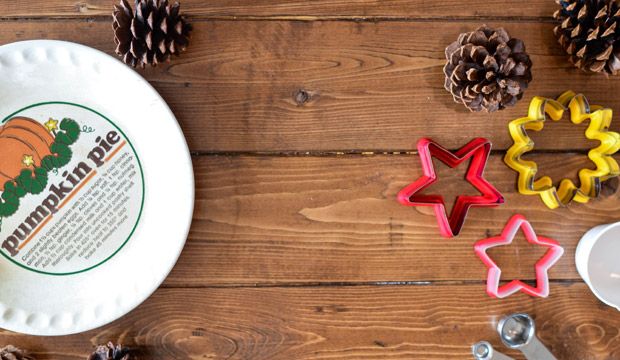 If you have kids, the Thanksgiving story is a great one to discuss with them (choose the sanitised, all-smiles version, or tell them about the smallpox-infested blankets - up to you).

It's also a fun excuse for an autumnal crafts session; turkeys lend themselves well to handprint crafts (just trace your hand, colour or paint, and add leaves or feathers for the turkey's plumage), while cutting old apples in half, painting them and turning them into apple stampers might just be our favourite sustainable hack to avoid chucking away any surplus food. Plus, the apple stamps can be used to decorate anything from T-shirts to totes. And don't forget to involve them in any cooking or baking you choose to do.

Go out for a meal 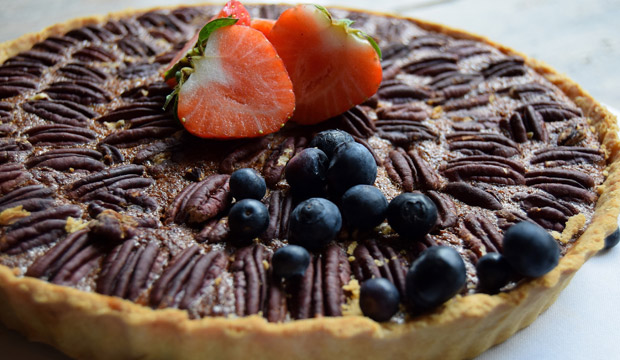 The good news when you're celebrating a holiday that you're choosing to celebrate? You can book a table at your favourite London restaurant and enjoy a Thanksgiving meal there, instead of cooking anything at all.

The Jones Family Kitchen in the Belgravia wellbeing hub, Eccleston Yards, is offering a Thanksgiving menu with US anthem-inspired cocktails and the scrumptious nougat and cranberry Lizzy's Pecan Pie for dessert, while Balthazar also has a special Thanksgiving menu each year to celebrate its NY roots. Cut at 45 Park Lane offers Thanksgiving twists throughout November: maple and bacon macaron bites, Wagyu beef sliders, mac and cheese with black truffles, followed by treats like pumpkin spiced cake pops, cinnamon apple pie, New York cheesecake and peanut butter and jelly Twinkies. Look out for vegan Thanksgiving options at By Chloe and Farmacy. 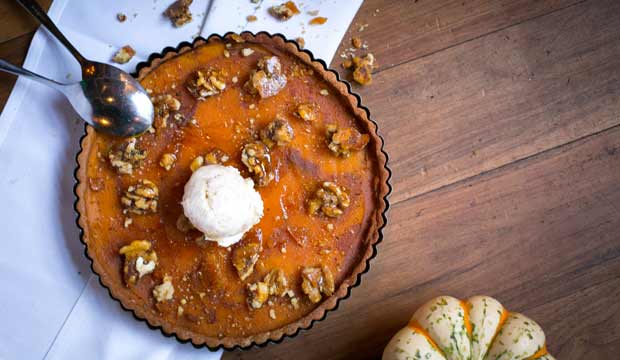 Gordon Ramsay's fine dining establishments are embracing the American holiday: Bread Street Kitchen is serving up a sharing-style Thanksgiving experience with snack platters and sharing desserts like peanut butter parfait and pumpkin pie, while Heddon Street Kitchen is doing turkey leg, bacon popcorn and pecan pie for pudding. The Narrow has a three-course Thanksgiving menu for £30 per person including pumpkin and crispy bacon soup, confit turkey leg with corn bread, shrimp, grits, cranberry sauce and apple pie, while Savoy Grill is serving the winning combination of Oysters Rockefeller and turkey.

East London HIX restaurant Tramshed has partnered with Bulleit whiskey for a ticketed Thanksgiving feast - complete with that American signature, bourbon (who doesn't want to sample a Sweet Potato Whiskey Sour?). The menu includes a selection of sharing plates, like a whipped pumpkin with White Lake goats' curd and pumpkin seed relish along with an Atlantic prawn salad with orange and shaved fennel, followed by a roast turkey dinner and bourbon and pecan tart for pudding. Remind us why anyone cooks for this occasion again? 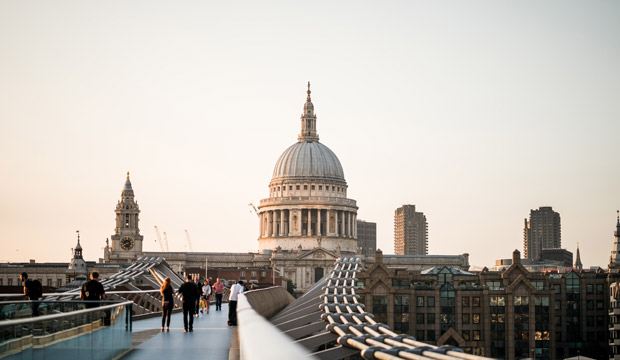 For some, the spiritual side of Thanksgiving can be found slumped on the couch watching the giant floats of the annual Macy's Parade on TV. Others need something a bit more substantial, like the annual Thanksgiving service at St. Paul's. The special service typically starts at 10am on the day and doesn't require a ticket to attend. 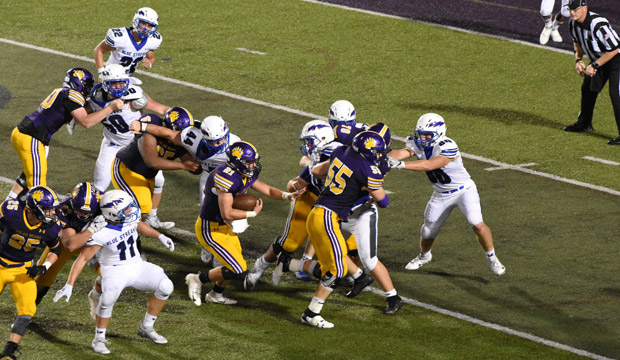 Thanksgiving wouldn't be Thanksgiving without some good ol' American football. For pigskin-obsessed Londoners, you can catch the NFL live on four dates at Wembley in October and November 2019. On Thanksgiving itself, you can catch NFL games past at pretty much every sports bar you can think of (Greenwood, Belushi's, and even BBQ joint Bodean's).