A nostalgic vision of an English childhood to be enjoyed by all the family this summer: Swallows and Amazons 2016

Swallows and Amazons presents to you a Brexiter's perfect vision of England. Welcome back to the 1930s, where every young child knows how to ‘claim an island’ armed with nothing more than a fruitcake; sweater vests are the height of fashion and hard-hitting insults like ‘duffer’ and ‘donkey’ have kiddies weeping into their tins of meat.

In this green and pleasant land, boys can be boys; girls can be bossy, boring and called Susan; and children aged five can drown in lakes because health and safety is for modern day wimps. Dangerous foreigners are brooding and suspicious, and probably pirates or spies, fathers are absent working for the empire, adults are idiots and everyone is home in time for tea. 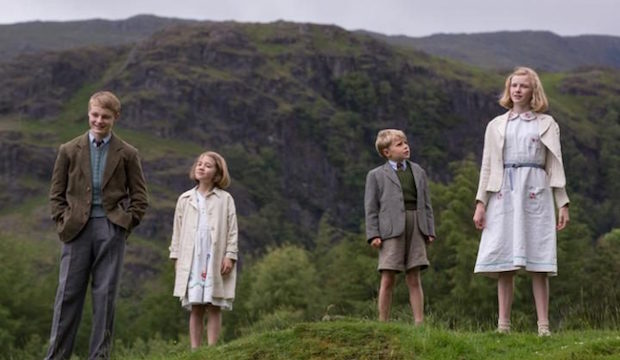 Based on Arthur Ransome’s wholesome bastion of children’s literature, this Swallows and Amazons adaptation is an unashamed hit of English nostalgia designed to make even the most cynical Londoner dream of whisking their little ones to the Lake District in tiny tweed jackets.

Ms Walker (Kelly Macdonald), takes her five boisterous children away for a summer holiday to the Lakeland, on that one steam train you’ve seen in every period drama and starring as the Hogwarts Express.

When brave John (Dane Hughes), nagging Susan (Orla Hill), plucky young Tatty (Teddie-Rose Malleson-Allen - her name was originally ‘Titty’) and ‘duffer’ five-year-old Roger (Bobby McCulloch), arrive in a cottage run by curmudgeon couple Mr and Mrs Jackson (Harry Enfield and Jessica Hynes), they beg to take Mr Jackson’s sailing boat out to a island in the middle of a lake and set up camp.

Because this is set in the good old days, before all that PC nonsense ruined everything, Ms Walker allows the four children to head off in a boat, alone, just as it’s getting dark and rainy. Obviously, the kids loose their basket of food and later a sibling overboard.

Their childish territorial scuffles with other children over the island are interrupted by real life adult espionage. Family relations are strained, unlikely friendships forged and there's enough real danger of death, arrest or grounding to keep kids on the edge of their seats.

Swallows and Amazons has always been loved for its portrayal of childhood innocence and adventure, and there’s a lot to fall in love with in this film. The acting, especially from little McCulloch, is heart-warming.