Our fave playgrounds in London 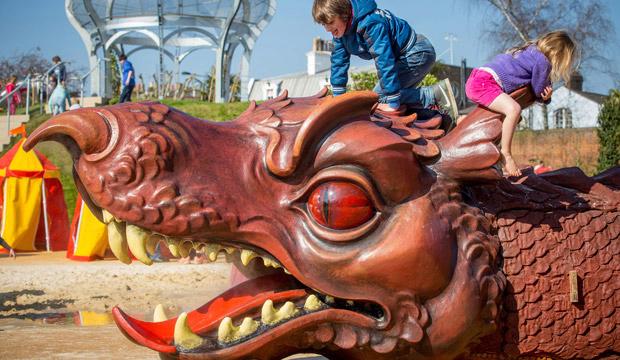 The best playgrounds in London like Hampton Court's Magic Garden
London's playgrounds are where you'll spend 90% of your early parenting years - and they're not all created equal. These adventure playgrounds are worth the trip outside of your post code. 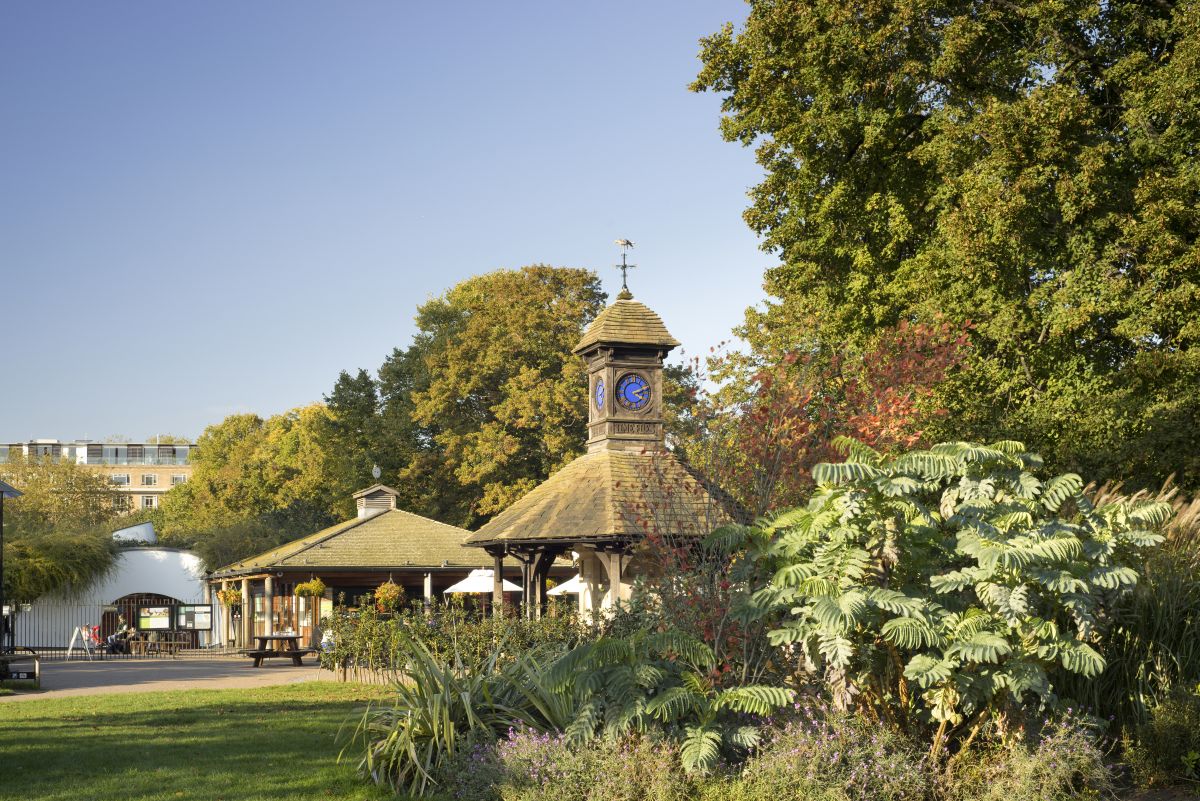 A gorgeously maintained park with a playground inspired by the adventures of Peter Pan, this playground centred around a pirate ship structure gives your kids the space to run wild and free while keeping them safe (the playground is enclosed). There's also a wooden climbing castle with ramparts, hiding spaces aplenty, a sensory trail, teepees and wet play options in the warmer months. You can easily spend the day here - without counting down the minutes until you're allowed to have a glass of wine. 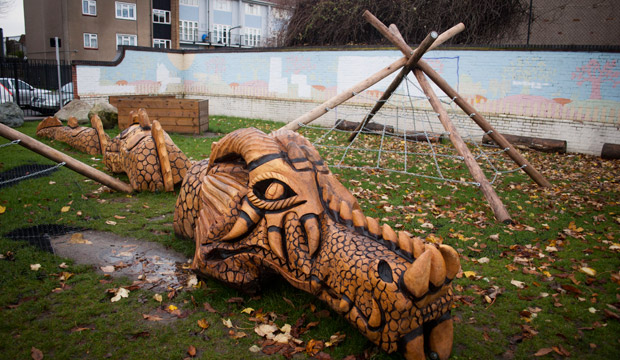 Walthamstow parents have some fantastic playgrounds in their 'hood, courtesy of London Play Design, whose mission is to create inspiring outdoor play spaces to motivate kids to want to spend time outdoors. The centrepiece of the Wingfield Park Playground is this climb-able dragon, who also serves as a focal point for imaginative games. Now, whose turn is it to be Zog?

This playground caters to kids of all ages with its natural features like rock pools, sand pits, treehouses and wobbly bridges, as well as more typical fare like slides and swings. There's a climbing wall for adventurers and an amazing water feature kids can't get enough of. Bring a change of clothes and enjoy whiling away the hours.

This playground is fantastic and made even better by the presence of Go Ape, our favourite activity to do with kids outdoors. Even if you're not booked in for an aerial adventure, this playground has plenty to tempt kids of all ages, and is conveniently separated into sections based on age. Even more handy, visibility is good, so you can have multiple children with you of different ages and still keep an eye on them while they play to their heart's content on apparatus like slides, climbing frames, a pirate ship and a wooden train. Wood-fired pizza is served in the cafe on site, and there's a mini-golf course you can book into as well. 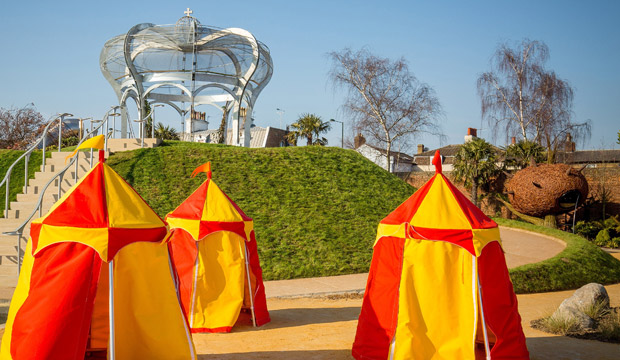 This is the playground experience to eclipse all others: on the site of Henry VIII's former tiltyard, the garden is your child's wildest dreams turned reality with an enormous dragon to climb, a giant jewelled crown, an underground grotto, aerial walkways, fountains and sand areas. There's also a giant maze for kids to explore nearby. Entry is included in the ticket price to Hampton Court Palace; or £8 per adult, £6 per child. Just make sure to tour the palace first because you will struggle to get your kids to leave this haven.

This Green Flag Award-winning park is a hidden gem in Lambeth: you'll find tennis courts, table tennis and football turfs alongside sand pits, swings, climbing frames and a very long slide. Even better? Zip Now London is back for the summer, giving thrill-seekers the chance to ride the 225m zipline all summer long. 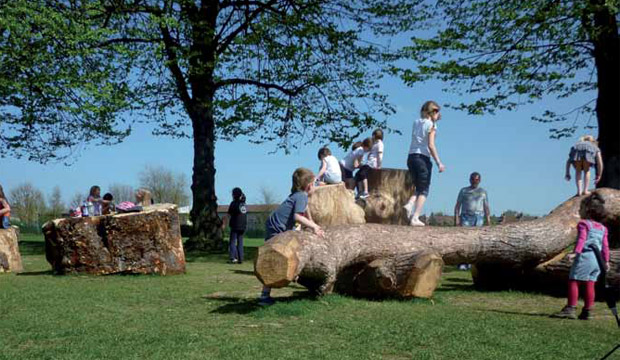 This lovely play area in Walthamstow has something for everyone, from logs to scramble over (on Aveling Fields) to a sandpit, tennis courts, skate park and even the William Morris Gallery for a spot of culture after a morning play sesh.

A small and lovely playground that's had a substantial refurbishment in 2015, this playground has it all: sandpit, swings, super-wide slide and a water play installation representing the River Thames. Kids especially love the wooden horse heads, and the musical chimes. 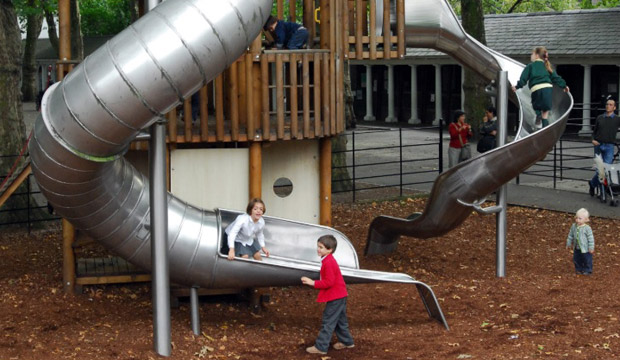 A seven-acre space in Bloomsbury, Coram's Fields is anything but ordinary, from the giant tube slide to the witch's hat swing. Older kids can zoom along on the zip wire, while babies will enjoy the sensory and musical area, sandpits and paddling pool (open in the spring and summer). If the kids still want more adventure, there's a city farm on site with goats, chickens and rabbits, as well as sports pitches and a wildlife garden - perfect for minibeast hunts.

If Peter Pan's Neverland were real, it would look something like Glamis Adventure Playground: colourful, creative and chaotic. In addition to all of the usual playground equipment, including a brilliant climbing frame, kids can also play in the vegetable garden and do arts and crafts. The staff is lovely, and there's even free food. 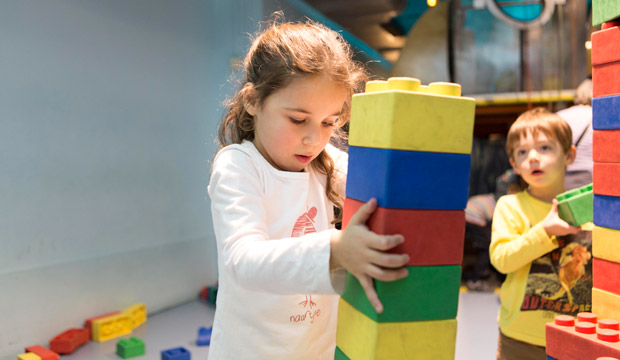 An indoor playground - that isn't a massive soft play zone - can mean the difference between a tantrum-filled rainy day and a really fun one. The Science Museum is our go-to zone when we need a brilliant indoor playground for the little ones; the Garden in the basement is ideal for kids aged three to six, with water play, giant building blocks and sensory play zones with giant tubes that can carry a whisper and a flying saucer that radiates white light. Not only will kids be having the time of their lives, they'll be learning about science in the process. 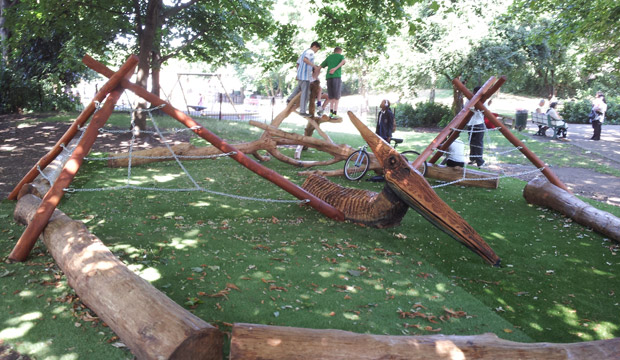 Sidmouth Park Playground is another London Play Design structure, with lots of natural logs to scramble over, teepee-style wooden climbing frames, multiple slides, and a zip line for older kids.