For starters, JM Barrie’s Peter Pan isn’t the only influence behind this pop-up; ShuttleCock Inc describe their Neverland as 'everything you loved about MTV Spring Break in the late 90s and letting it loose on an immersive adult playground'. But Peter Pan and MTV Spring Break aren’t a natural pairing, and so the experience of being whirled through the home of the Darlings – where guests are told not to put their glass on the table and to remember to take their shoes off – before being flung into the main space with dancers, party-goers and hyped-up faux MTV reporters, is bizarre.

Then there’s the acting itself. While full of gusto, the performers seem to fall very much into the ‘entertainer’ bracket, as opposed to the ‘actor’ one. As we stood squashed into the space between Tink’s bar and the food stalls, conversations were interrupted every now and then to watch slightly awkward dance-offs, or the gangsta rapping Croc shoot his latest music video on the stage in front of us. Yes, there was something softly reminiscent of MTV Spring Break about it, but it was much less cool than I remembered. Or have I just grown out of Neverland? 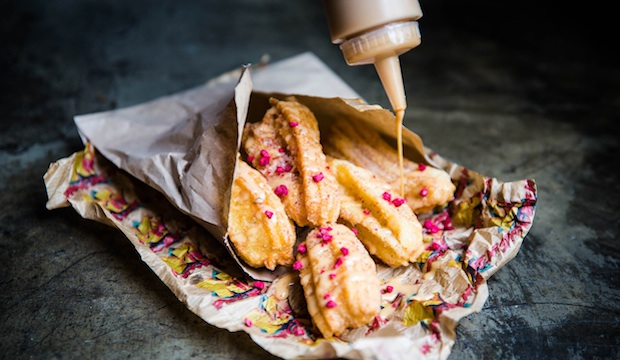 Dulce de leche churros are among the offering available in Neverland

The team behind Shuttlecock Inc have made a name for themselves in the pop-up food scene. Their restaurant and creative space Carousel is famous for hosting a rota of brilliant chefs from around the world. Fittingly, here, they’ve gone down the cheap and delicious street food route, with food stands serving fish tacos, hot’n’sour wings and brioche three-cheese toasties. I tried the tacos and wings, and both were perfectly tasty, albeit the portions were small. The bar was a little more disappointing. While hitting the nail on the head with the Austin dive bar image, drinks were very limited (just one beer and wine option, two cocktails and shots) and the promised ‘Fukk’n Intense Dark’n’Stormies’ were nowhere to be seen.

The highlight was the tucked away Neverland Camp with its chill-out teepees and soothing smell of incense. Sat amongst drums and fairy lights, we were offered a much more delicious rum and coconut cocktail, massages and bindis (which I politely declined several times, feeling slightly uncomfortable with the cultural appropriation element of it).

There was, also, the secret den which promised punters the chance to play games with the pirates or negotiate a meeting with the Captain. However, once we’d climbed the wooden ladder and entered the den there was one already occupied games table and not a lot else by way of interest. Spotting a second wooden ladder leading up to yet another floor, I thought perhaps there would be more going on up there. Unfortunately, this landed me in a very dark laundry room that was not a part of the immersive experience and I was soon called back down by a member of staff, who insisted there was no need for them to put up sign telling guests not to go up there, despite it being off bounds.

If the price point wasn’t so high for tickets (a standard £40 ticket gets you one drink and two food tokens, while a VIP ticket costs £60 and gets you four cocktails and four food tokens) the small glitches and cringeworthy entertainment would be easier to overlook, but as it stands, I’d let this one pass and book a table at Carousel instead. 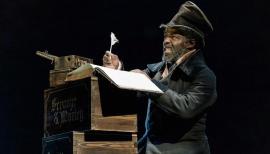 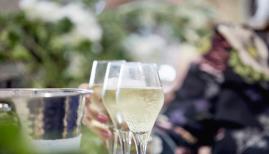