Where to eat in Chelsea, London

From superlative fine dining to sizzling fresh fish, foodies are well catered for in SW3. In fact, between gorgeous stately staples such as Bluebird and Medlar, and fresh flavours courtesy of Vardo and Chicama, eating in Chelsea has never been better. For help in navigating its revamped restaurant scene, read on. 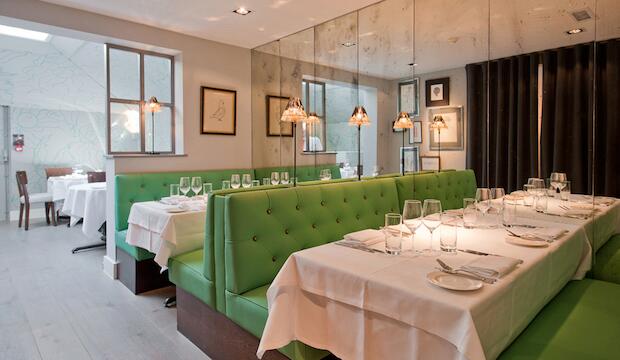 Medlar is the kind of special neighbourhood restaurant we all wish was on our doorstep. Old-school with a modern edge, it's a worthy special date-night restaurant. The menu speaks confidently of a chef-proprietor with a deep understanding and love of good food. It is French accented, yet draws inspiration from all over Europe. (Any restaurant offering triple roast chips with béarnaise has to have its heart in the right place.) What's more, there are warm madeleines with blood-orange sorbet and canelés Bordelais with griottine cherries and chocolate ice cream. Staff are attentive and, refreshingly, don't give a lecture on how to eat the food, nor do they insist on reeling off every producer and ingredient. 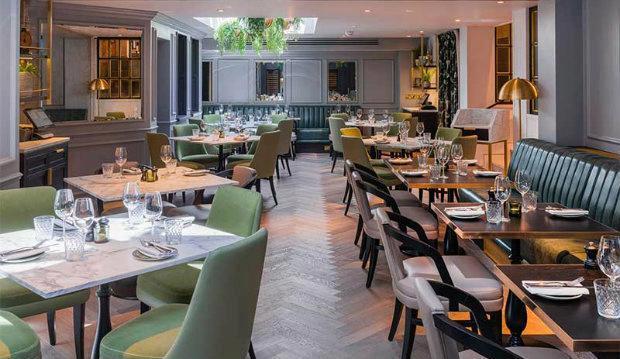 Hans' Bar & Grill is affiliated with boutique hotel 11 Cadogan Gardens, but is very much a stand-alone brasserie and a destination restaurant in its own right. Masterminded by the team behind luxury hotels Cliveden House and Chewton Glen, and nestled among the artisanal shops and food suppliers of Chelsea's Pavilion Road, its elegant interiors, top-notch seasonal British food and superb wine list of over 180 wines make for a charming retreat in the heart of Sloane Square. 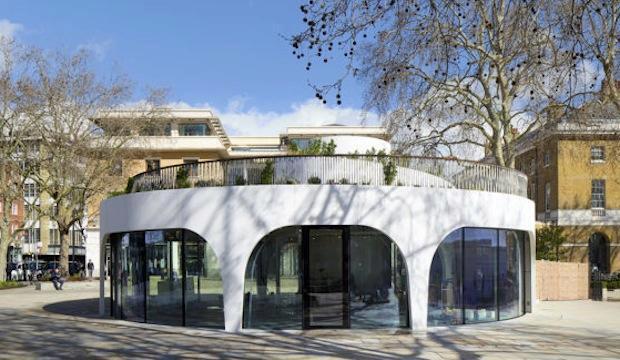 If you’re a Chelsea local, or someone who frequents the area semi-regularly, you will have clocked Vardo, regardless of whether you’ve dined there yet. The restaurant is housed inside the striking cylindrical pavilion on Duke of York Square. The younger sibling to popular New Zealand-inspired restaurant chain Caravan, Vardo is open all day, serving breakfast, lunch and dinner. The focus here, however, is on ‘low and slow’ cooking, with the menu featuring plenty of spice-tossed meats, tahini-smeared plates, grainy bowls and pickled accompaniments. All in all, and very much like its older sibling, Vardo boasts a menu and atmosphere that are exciting in equal parts. 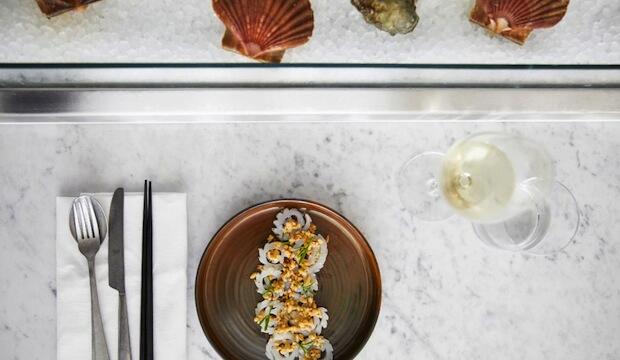 The Sea, The Sea

Playfully named after Iris Murdoch's novel of the same name, The Sea, The Sea is the latest opening from Alex Hunter, co-founder of acclaimed Soho seafood restaurant Bonnie Gull Seafood Shack. Described by Hunter as a ‘fish shop and seafood bar’, The Sea, The Sea is a fishmonger and deli by day, restaurant and champagne bar by night.

The space itself has been cleverly designed to make that easy segue from daytime to evening. Forget sterile white tiles and chrome, the room harnesses natural materials, such as the rock walls which evoke a cliff face lapped by the tide – an effect increased by a glow of uplighting. Just like a traditional seafood restaurant nestled on the shore’s edge, the menu at The Sea, The Sea changes daily, depending on the fresh produce that comes in. But regardless of the dish du jour, diners can expect a truly special meal in a setting fit to rival it. 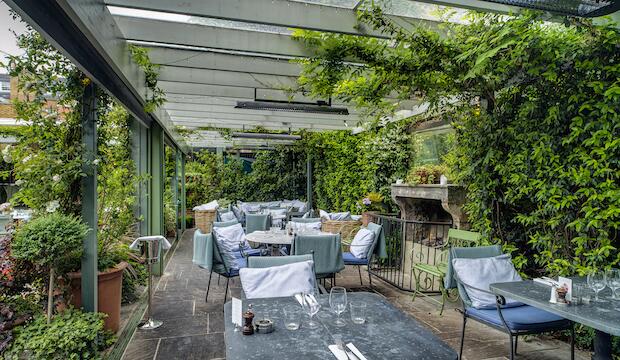 Love or hate The Ivy chain’s expansion, the Chelsea outpost along with the Soho original remain in a class of their own. What sets Chelsea apart most of all is the incredible, huge garden – and it is stylishly furnished, too. The Ivy has the appealing buzz of a confidently successful brasserie that knows the foibles of its well-dressed, monied regulars. The food is good without being outstanding, though that's not really the point of being seen here. Best are old favourites like steak tartare, fish cakes, shepherd's pie, plus there's a good choice of substantial sandwiches from BLT to crab and smoked salmon. It's a lovely place for breakfast, and prices are keener than many of the cafés scattered around King's Road. 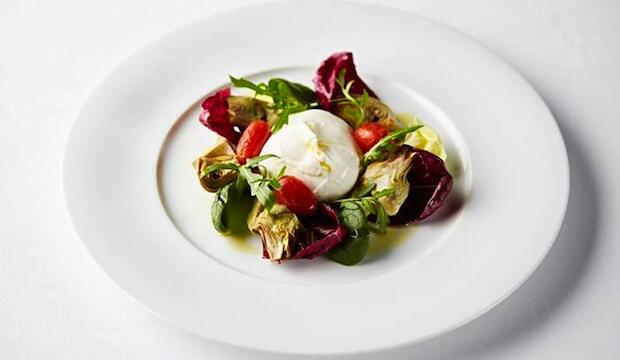 After 25 years delighting diners in Putney, Enoteca Turi closed its doors only to pitch up on Chelsea Green, offering a similar selection of masterful, elegant pasta dishes and a superlative, 450 cellar wine list. Owner Giuseppe Turi is a former sommelier who's worked in many of London's top hotels. Imaginative pairings of regional Italian dishes with wines that enhance them are what make Enoteca Turi so special, particularly for those of us who love fine wines, yet can be a little daunted by a long list.

Be sure to order pasta. Our top picks are the cacio e pepe tortelli served with diced and seared cuttlefish, and the crab pasta with somewhat subdued chilli. From there, we suggest moving straight on to the impeccable desserts, which might, if you’re lucky, include a deconstructed tiramisu with marsala ice-cream or a seven-layer chocolate and hazelnut cake with olive oil ice cream. 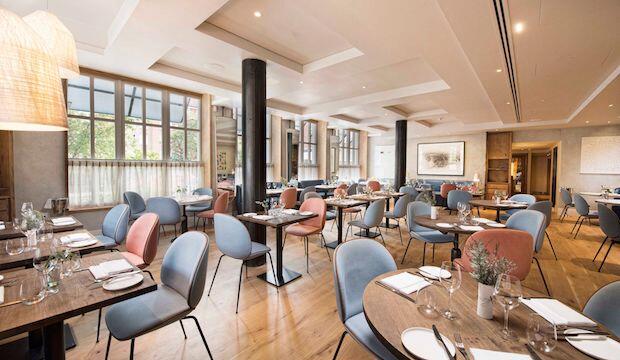 Mayfair's loss is Chelsea's gain. After 25 years at The Square, Phil Howard – one of the capital's best and most respected chefs whose alumni are a who's-who of the London restaurant scene – relocated to Chelsea. Elystan Street, just up the road from the Chelsea Arts Club, is as sophisticated and ambitious as The Square, though decidedly less formal. Dishes may include an outrageously good quenelle of beef tartare served on an artichoke heart, or divine cod roasted to a crust at the top (and close to sashimi in its depth), with a topping of plump golden raisins and sharp lime, accompanied by delicately spiced cauliflower. For dessert, the fig, almond and pistachio tart with goat's cheese ice cream is a must. The almost entirely British cheeseboard is very good too. 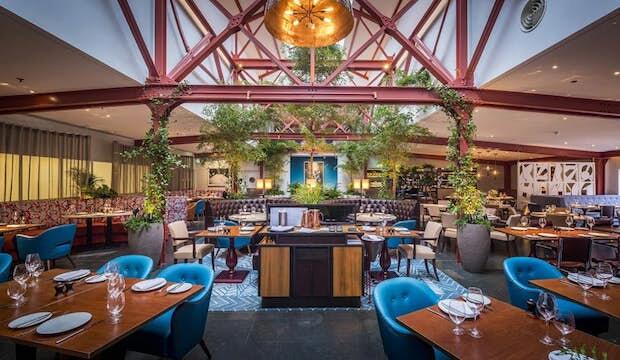 Bluebird is back on form after a few years when it seemed to have lost culinary direction with a succession of chefs at the helm. Now Simon Gregory is happily ensconced and brings his vast experience as executive chef of Gordon Ramsay's restaurants and the hip Shoreditch Ace hotel to making Bluebird vivacious and fashionable again. Bluebird really comes into its own with its offering of courtyard dining. Here, you’ll find yourself at a garnished table, surrounded by crates of shrubs and botanicals, blossom trees and bright summer flowers.

Food wise, it’s got to be the Szechuan and five-spice squid or the lavish lobster spaghetti. It's also the place to come for traditional summer desserts, such as pavlova and a modern take on Eton mess. 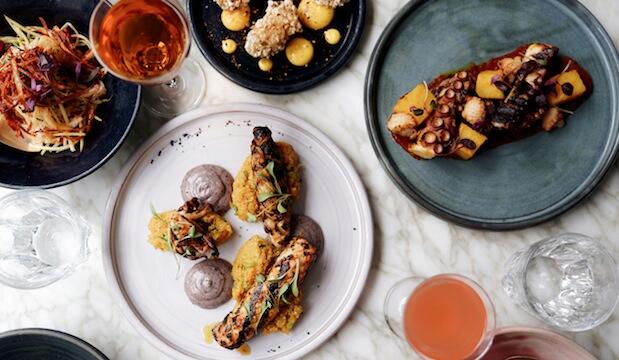 Come summer, our thoughts invariably turn to seafood and Chicama specialises in Peruvian seafood. Hence the dishes to choose are ceviche, tiradito and spectacular crisp sea bass with chilli sauce. For weekend brunch, the savoury waffles, made with quinoa or sweet potato, are a great choice alongside Pisco sours and Mezcal cocktails. There's an impressive vegetarian menu, too.