Established by German choreographer Maresa von Stockert in 2002, the company is known for presenting witty dance theatre.
Its new piece, Constructions of Thin Air, makes its London debut at The Place following a well-received premiere at DanceEast, Ipswich, and visits to a handful of other UK venues.

It evolved from Tilted Productions’ spectacular site-specific promenade piece BELONGING(s), an outdoor offering that centred on the idea of locality and toured nationally and internationally from 2015 until 2017.

Produced for the stage and unfolding over two acts, Constructions of Thin Air endeavours to further scrutinise the changing nature of home and identity while also considering the systems (political, social, economic) that surround us.

Constant transformations of the set play with the audience’s sense of stability and place, reflecting the company’s enduring interest in the physical dialogue between human bodies and objects, including cardboard boxes.

Artistic Director Maresa von Stockert reveals: 'Cardboard boxes for me are linked with the word belonging. They remind me of moving home, changing the physical place one might feel like one belongs to.'

She adds: 'For me the physical dialogue between the performers and the objects on stage is a metaphor for the fragile, changeable meaning of home, identity and belonging.'

NOTE: Suitable for all ages.
On Friday 9 March: Stay after the show for a Q&A with the artists. 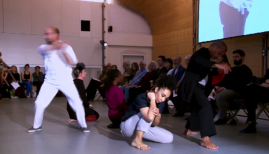 Jacky Lansley: About Us Review