Light of Passage, choreographer Crystal Pite’s reworking of her award-winning piece on the refugee crisis for The Royal Ballet, has had its world premiere at the ROH

2 CW readers are interested
The Royal Ballet, Light of Passage review 3 The Royal Ballet, Light of Passage review Teresa Guerreiro
Canadian choreographer Crystal Pite’s treatment of the refugee crisis, entitled Flight Pattern, premiered at Covent Garden five years ago. It was special for various reasons: dancemaker du jour Pite was the first woman commissioned to create a work for the Royal Ballet on the main stage in over two decades; Flight Pattern, which went to win an Olivier award was a timely, powerful commentary of the plight of refugees.

The world refugee crisis hasn’t abated – on the contrary – so on its return Flight Pattern retains its considerable power. But now Crystal Pite has decided to tag on to it two new pieces, making use of the remainder of Górecki’s haunting Symphony of Sorrowful Songs, the first movement of which she had used for Flight Pattern.

The resulting assembly, entitled Light of Passage, extends the range of the choreographer’s concerns beyond the condition of refugees to embrace humanity as a whole, from childhood to old age, but never really coheres.

Flight Pattern opens the programme, Marcelino Sambé and Kristen McNally outstanding in a reprise of their roles as the couple racked by grief at the loss of their baby. McNally’s taut kneeling body is shaken by spasms of physical pain, Sambé’s attempts to console her broken by his own despair, his body convulsing in leaps of revolt and incomprehension.

After the interval comes Covenant, 10 minutes that seem to be no more than a riff on the old African proverb, ‘it takes a village to raise a child.’ Six white-clad children caper about the stage, being lifted and gently handled by a group of black-clad adults. 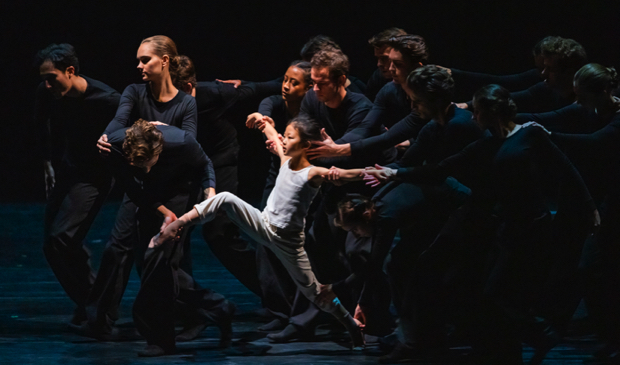 Crystal Pite's Light of Passage for The Royal Ballet. Photo: Tristram Kenton ROH 2022
There seems to be no further point to this blink-and-you-missed it section, apparently meant by Pite as a paean to the rights of children.

Part three, Passage, marks a visual contrast with Flight Pattern, in that the corps, numerous again, are clad in bright white and dance on a well-lit stage, a welcome change from the pervading gloom of what went before.

This section, we’re told, is about loss and separation, old age and the unknown that awaits us all at the end of it. The focus of the piece are two older amateur dancers, Isadora Barbara Joseph and Christopher Havell. 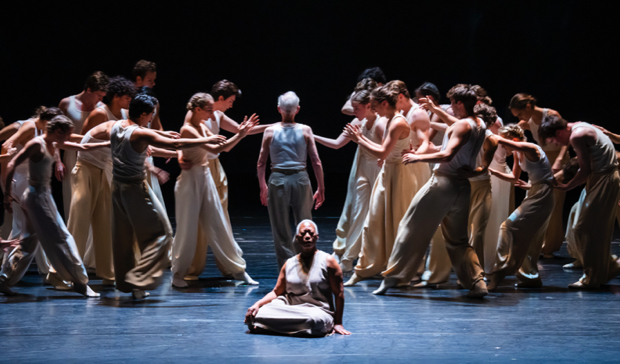 Light of Passage by Crystal Pite, for The Royal Ballet. Photo: Tristram Kenton ROH 2022
The piece achieves moments of great beauty when the ensemble dance as one, their bodies skilfully sculpted by the light, but it was unclear to me whether the repetitive choreographic language was meant to quote from Flight Pattern, or was just limited in its scope.

Górecki’s haunting symphony was cogently played by the Orchestra of The Royal Opera House conducted by Zoi Tsokanou; and soprano Francesca Cheijina gave heart-rending expression to the poetic laments framed by the music.