Taj Express tells the story of the young composer Shankar, who struggles with his music until he begins to follow on the footsteps of his idol, A. R. Rahman, and hey presto! he discovers his path to success.

You get the sense that the plot is but a pretext for all the singing and dancing, and Taj Express brings us some of Mumbai’s best with stars from Bollywood cinema and its greatest musicians live on stage. The musical score features the songs of the Oscar-winning composer A. R. Rahman, creator of the soundtrack for the 2008 hit film Slumdog Millionaire.

The choreography comes from one of Bollywood’s top young choreographers, Vaibhavi Merchant, and the work is directed by her sister Shruti Merchant. The book bears the signature of the award-winning international music theatre writer and director, Toby Gough.

So, as the nights start drawing in and winter lurks, why not go for a hyper-dose of light and jollity and spend an evening with Taj Express? 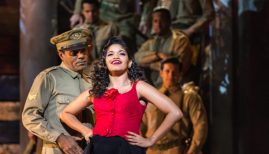