Both pieces boasted interesting ideas, vibrant casts and contagious energy; but both relied on fragmentary imagery to serve underdeveloped concepts.

Warrior Queens (pictured top) was choreographed by Julia Cheng of House of Absolute, an outfit that describes itself as trying to ‘dismantle systems of oppression advocating for communities and cultures centred by our multi-continental values of Asia, Africa and the Pacific.’

As seems to be de rigueur these days, the piece started on a stage plunged into Stygian gloom, where six female dancers appeared to be no more than silhouettes, their draped costumes (Ceci Calf) pointing East. At the martial beat of a drum they rose from milky pools of light, one raised arm ending in a fist.

The piece was inspired by the myth of Hua Mulan, the heroine of Chinese legend who disguised herself as a man to take her aged father's place in the army; and much of the dancing was vigorous and confrontational, its movement suggestive of martial arts.

A plangent song segued into a speech in what sounded like Japanese; at one point, as a little more light mercifully flooded the stage (lighting design Joshie Harriette) oversized shadow silhouettes of the women were projected onto the backcloth.

The thing is, once the martial theme was established, the piece didn’t seem to go anywhere and didn’t really sustain its 40 minutes’ duration. A striking final image where a fire pit emerged upstage and was slowly crossed by each dancer individually was effective when the first dancer did it, but pointlessly repetitive by the sixth dancer.

Shades of Blue seemed to be about the dispossessed. Authored by Matsena Productions, a performance company founded by the two Zimbabwe-born, UK-based brothers Anthony and Kel Matsena, it was initially thrilling, as its nine dancers burst onto the stage sending jolts of electricity coursing through our bodies. 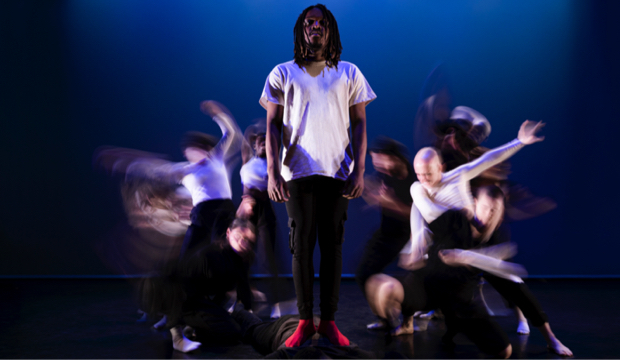 However, as it broke into individual disconnected sections, it began to drag. So, for example, a powerful scene where an imprisoned black man was forced by the disembodied voice of a white man to perform a series of pointless and ever more pressing tasks – ‘smile’, ‘beg’, ‘confirm’… – lasted too long, so that its oppressive nature was diluted.

A man came downstage clutching a microphone to make a rousing speech about revolution – ‘the revolution is live!’ The black-clad dancers lined up for a section that mimicked army training.

The ideas are there; they just need a stronger, tighter thread. Visually, though, Shades of Blue is absolutely enthralling, thanks in large part to Ryan Joseph Stafford’s powerful and imaginative lighting design.