Rambert’s dancers are on top form, their versatility amply demonstrated by a bill that ran the gamut from the purity of contemporary dance language in Alonzo King’s following the subtle current upstream (pictured top) through Ben Duke’s zany and punchy piece of dance theatre, Cerberus, to the van Opstal siblings' jerky, disturbing Eye Candy.

Eye Candy had its on-stage debut at Sadler’s Wells, adapted by its Dutch choreographers Imre van Opstal and Marne van Opstal from its lockdown live-stream. 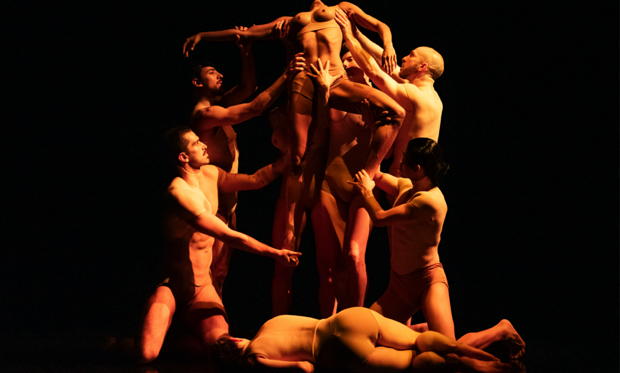 Rambert dancers in Imre van Opstal and Marne van Opstal's Eye Candy. Photo: Camilla Greenwell
It’s an insistent, uncompromising examination of the body and how we judge human physicality in a vain search for unattainable beauty. The cast of eight are costumed in silicone suits designed to make them appear nude and almost unbearably vulnerable.

There’s no joy in the dancers’ jerky, anguished movements, no pleasure in how they paw each other. Moving to a harsh score by Amos Ben-Tal against a set made up of two dark and rugged rock walls, theirs are bodies mostly divorced from their human dimension, Fabiana Piccioli’s lighting accentuating their carnality.

Cerberus is typical Ben Duke. A very clever, mischievous maker of dance theatre, Ben Duke has a unique way of making the audience feel relaxed before moving in for the kill. 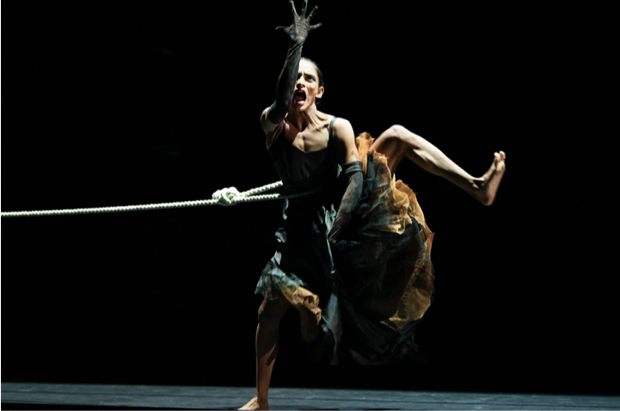 Rambert dancer Aishwarya Raut in Ben Duke's Cerberus. Photo: Camilla Greenwell
Named after the multi-headed dog of Greek myth that guarded the entrance to the underworld, Cerberus draws primarily from the story of Orpheus and Eurydice. Life is the effortful progress from stage right (birth) to stage left (death) as enacted a woman (Aishwarya Raut) pulling against a rope tied around her waist.

In a comedic two-hander, one man (Antonello Singiradi) addresses us in Italian, with another providing a translation. The two try and fail to stop an endless procession of people entering the underworld. So far, so amusing. But at an imperceptible point the atmosphere changes, and Singiradi’s ever more frantic search for Aishwarya leads him into the underworld to bring her back, Orpheus-like.

The finale packs as powerful a punch as any piece of theatre can.

The veteran African-American choreographer Alonzo King believes that everything that exists in nature is seeking a return to its source. His 2000 piece, following the subtle current upstream is a deeply engaging work for 12 dancers, presented in a variety of groupings, solos and duets.

King’s choreographic vocabulary is that of contemporary dance, with movement that requires the harmonious unfolding of the whole body, from deep plié into developé or elastic arabesque. It shows bodies in constant flow at their most aesthetic.

It’s abstract dance but steeped in meaning, and the progression of the musical score towards two songs by the South African diva Miriam Makeba subtly underlines the yearning to return to source.

Throughout the pleasure of watching Rambert’s technically superb and versatile dancers never dimmed, and this triple bill seems to point the way to the company's future direction under Benoit Swan Pouffer.