The Spanish dance superstars Sara Baras, Rocío Molina and Olga Pericet are among those performing in this year’s edition of Sadler’s Wells' Flamenco Festival

Flamenco Festival is an exhilarating fortnight of performances that thrill theatregoers with the sights and sounds of traditional and experimental flamenco. Showcasing captivating collaborations between flamenco’s most renowned choreographers, dancers and musicians, it’s a way for London dance fans to experience Spanish flamboyance without leaving the capital.

Some of the biggest names in flamenco are featured this year, including Sara Baras, Rocío Molina and Olga Pericet.

Flamenco Festival London from Sadler's Wells on Vimeo.
The revolutionary dancer Sara Baras, famous for her fiendishly fast footwork, is returning to Sadler’s Wells to open this year’s festival with the UK premiere of Sombras (Shadows).

In Sombras, Baras draws on elements of La Farruca, a dramatically speedy form of flamenco dance usually reserved for men, to depict a journey representative of her evolution as an artist.

She’ll be joined by six dancers from her company, Ballet Flamenco Sara Baras, which is celebrating its twentieth anniversary this year.

Olivier Award nominee Rocío Molina plays with concepts of gender in her fiercely provocative work, Caida del Cielo (Fallen From Heaven), first seen in London 18 months ago at the Barbican.

This show challenges expectations of womanhood and flamenco by shaking up the traditional. Molina adds a drum kit and electric guitar to the standard soundscape and draws on both feminine, masculine and animalistic movement. It’s an exploration of gender, identity and flamenco itself.

Olga Pericet, who won the Spanish National Dance Prize in 2018, is known for creating a world of evocative imagery in her theatrical dance offerings.

Her new piece, The Thorn That Wanted to be a Flower, or The Flower That Dreamed of being a Dancer, is sure to prove just as surreal and poetic as its title when it has its UK premiere as part of Flamenco Festival 2019.

For a festival within the festival, the Gala Flamenca brings together a number of contrasting artists, each doing their own thing and challenging the others to match up in an exciting contest that never fails to rouse the crowds.

Always a highlight of the Flamenco Festival, this year’s Gala Flamenca features the singer Maria Terremoto – the youngest ever recipient of the Giraldillo award for new artist at the Seville Flamenco Biennial.

Sadler’s Wells’ Flamenco Festival is now in its 16th year and has been going from strength to strength. It has a loyal and growing following, so if it piques your interest, you’re advised to book early.

Full line up and details here 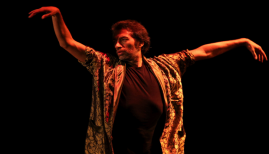