Richard Alston Dance Company bows out at Sadler’s Wells with Final Edition, a reminder – if one was needed – of all we’ll miss when the company is gone forever

A cut in the Arts Council subsidy to the Richard Alston Dance Company, as savage as it was unexpected, means it’s now forced to close down and will do so this month, March 2020.

Sure, Richard Alston or, to give him his formal title, Sir Richard, will continue to choreograph, as at 71 years old his creativity remains undimmed, and the dancers of his company will find work elsewhere, but what will be forever lost is the symbiotic link between dancers and dance maker, which meant that for a quarter of a century nobody could dance Richard Alston like Richard Alston Dance Company.

The dancer Liam Riddick, currently of BalletBoyz, who was a member of Richard Alston Dance Company for eight years, tweeted in a heartfelt tribute: ‘Richard taught me to come alive on stage and pushed me to be the best performer I can be.’

Shine On is choreographed to an early song cycle by Benjamin Britten, scored for piano and soprano, and set to WH Auden’s 1936 poetry collection On This Island.

The pianist Jason Ridgway, a veteran Alston collaborator, and the soprano Katherine McIndoe share a bare stage with the dancers, who perform in varied formations, pairs, trios and full ensemble. Their costumes (Fotini Dimou) are at once simple and eye-catching: black pants and flowing skirts, with shimmering off-white T-shirts for the men and bodices for the women. Subtle lighting by Zeynep Kepekli helps set the mood.

Britten’s music responds to Auden’s poems with sensitivity and simplicity, and Alston in turn responds to Britten’s every last inflection with his trademark musicality, now reflecting the joy of the opening ‘Shine on!’, now the haunting notes of a dark nocturne, before returning to the joyous opening.

The steps are so recognisably Alston’s it hurts: the tilting arabesques, the straight arms raised to heaven forming a V-shape with the body, the straight-leg jumps, the impeccable unison breaking into canon formations. Dazzling.

The same is true of Voices and Light Footsteps, a mostly elegiac piece set to a collage of music by the Renaissance composer Monteverdi, a favourite of Alston’s. Here he blends in hints at courtly dances, and languorous, dreamy pas de deux.

Also in the programme was a new work by Alston’s associate choreographer (and former company dancer) Martin Lawrance. Entitled A Far Cry and set to Elgar’s Introduction and Allegro Op. 47, it's a tempestuous affair, Lawrance’s tone always Dionysian to Alston’s Apollonian.

Two short Alston repertoire works – Isthmus, first performed in 2012, and Mazur from 2015 – provided a link to the past, and the programme opened with Bari, a sunny piece inspired by the Pizzica dance of southern Italy, which Alston made for graduating students from London Contemporary Dance School, where he himself trained, and performed here by the LCDS graduates.

And so we reach the end, and all that’s left to say is goodbye, Sir Richard, and thank you! 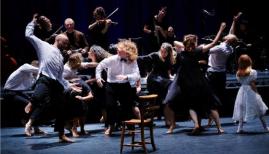 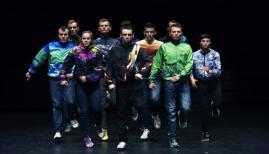 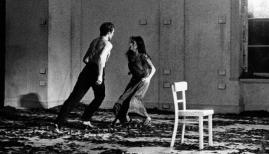