Pina Bausch's early work, Bluebeard, a stunning depiction of the fraught relations between the sexes, had its UK premiere at Sadler's Wells

Tanztheater Wuppertal Pina Bausch, Bluebeard review 4 Tanztheater Wuppertal Pina Bausch, Bluebeard review Teresa Guerreiro
The stage is set as a wide room with dirty white walls, tall windows and doors, where the floor is strewn with dry, brown tree leaves. A woman in a dusty pink shift lies motionless on the ground, her forearms upright, like a doll abandoned mid-play – or a woman awaiting her lover. A man in a dark suit sits in front of a large tape recorder.

He presses a button. As the first notes of Béla Bartók’s Duke Bluebeard’s Castle rise up, he rushes to the woman, lies on her, and together they slither across the floor, urgently and briefly. He jumps up, rushes to the tape recorder. Stops. Rewinds. Presses play. Repeats over and over.

They correspond loosely to Duke Bluebeard and his new wife Judith, the sole characters of Bartók’s intense short opera, each note loaded with growing foreboding, as Judith insists on opening seven locked doors in Bluebeard’s castle, unveiling ever more sinister secrets and moving inexorably towards her own demise.

Bluebeard, or to give it its full title, Bluebeard. While Listening to a Tape Recording of Béla Bartók’s Opera 'Duke Bluebeard’s Castle' is not Pina Bausch’s retelling of the Bluebeard story. Rather, this 1977 work is Pina Bausch’s response to Bartók’s opera, a seminal work in her canon, because it marks her break with traditional dance making and the beginning of her own trademark style of dance theatre.

Pina Bausch’s Bluebeard is fragmentary, drinking from the rich well of German expressionism, alternately tender and violent, funny and absurdist, frenzied and languid, and even when opaque and unfathomable, human and deeply affecting.

This is an unflinching depiction of the fraught relationship between men and women. The two central characters are soon joined by the full ensemble of 21, filing in hand-in-hand like a slow-moving Greek frieze, almost unnoticed in the background, as the drama between the two continues to unfold in the foreground.

All the women have long lustrous hair, which they flaunt, a symbol of their femininity, or a curtain behind which they hide. They wear rich evening gowns, which throughout the work they will take off and put on again, as if role-playing, hiding and revealing, protected and vulnerable.

The men are in suits, but at some point they strip down to coloured underpants and line up downstage to show off their physique with exaggerated displays of muscle flexing. Their cheesy grins show they are aware of how ridiculous this blatant masculinity is; but also that they don’t care.

The balance of power between men and women shifts constantly. One moment they pair up for a tender slow dance, the next they’re all aggressive mutual challenge and physical confrontation.

And throughout this maelstrom, the central male character stops, rewinds and plays Bartók’s score obsessively, reenacting his own complex relationship with the woman and his own violence against other women, too.

Bausch’s Bluebeard hasn’t been performed in 25 years, because the Bartók estate withdrew permission for the use of the music; and you can’t blame them, really, seeing as the composer’s sublime score is pretty well savaged in the stop-start turbulence that pervades Bausch’s piece.

However, copyright on the Bartók's Duke Bluebeard's Castle has expired, which allows Pina Bausch’s Bluebeard to be performed again. Bartók’s loss, perhaps, but very much our gain. 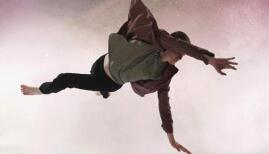 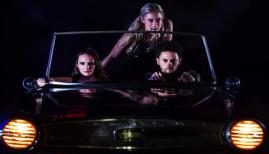