Rambert, Draw from Within on stage review ★★★★★

Rambert is back on stage at Sadler’s Wells with its daring, experimental work Draw from Within

It’s an episodic, absurdist piece danced to an eclectic mix of music and the spoken word, loosely inspired by the strange pandemic times we’ve living through, and very much in keeping with the avant-garde outlook and processes of its Belgian choreographer, Wim Vandekeybus.

A diagonal shaft of white light marks a path on the otherwise dark stage, where two men execute a jaunty, vaguely Latin dance to a jazzy tune. And then one of them moves forward and recites lines from a Ted Hughes poem with the accent on the repeated word ‘nothing.’

From then on chaotic image follows chaotic image, rather like in dreams and nightmares. Liam Francis, a superlative dancer with a hip-hop background, executes an acrobatic solo downstage, while a sinister ceremony involving fire takes place in the centre of a by now darkened stage. 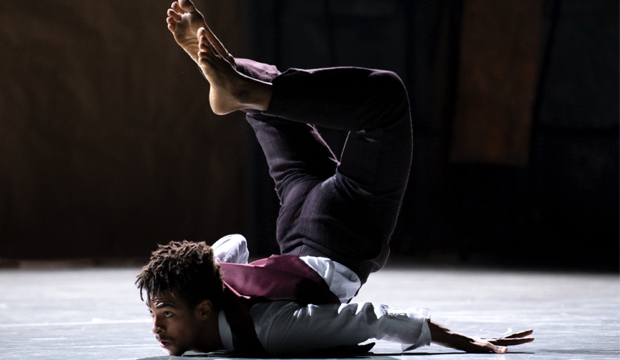 There follows an extended group dance, where dancers draw ephemeral patterns with the smoke of extinguished fire sticks, criss-crossing each other but not really communicating.

The mood alters radically to one of great anguish and desolation suggested by a Balkans song translated on stage by a yearning female solo, while all around seemingly dazed dancers fall slowly to the ground, rise and fall again.

Eventually we move to a long narrative sequence. A woman in the last throes of labour staggers on, letting out blood-curling screams. A man in a suit is an excited TV presenter narrating a scene which is causing much interest and anticipation in the assembled crowd. And slowly a man who’s cleverly folded around the woman's body so that his back looks like her distended belly unfolds himself and is born.

Is he a kind of messiah? The way in which the crowd is eager to indulge him would point to his special status. And, in fact, as he develops into a cruel tyrant, so his followers become dead-eyed cult members.

The piece ends in the bare, neon-lit underground corridors of the Southbank, represented through a wide-lens photo projected onto the stage. A woman stands alone, frightened and bullied by cold, inhuman figures of authority. Is she in hospital? Does she need to be there?

Throughout Rambert’s 14 dancers perform Vandekeybus’s eclectic, acrobatic, often visceral choreography with verve and commitment. They bring us laugh-out-loud comic touches one moment and deeply disturbing nightmarish visions the next, proving they can do the sort of experimental dance theatre the company seems to be steering towards under its new director Benoit Swan Pouffer.

Draw from Within is a product of its time, possibly not a major stage work (it's lost some power in its transition from screen to stage), but certainly a vibrant, imaginative one whose images will haunt you well after you've left the theatre..