African dancers bring something new and exhilarating to Pina Bausch’s seminal reading of Stravinsky’s The Rite of Spring, currently at Sadler’s Wells

Stravinsky’s The Rite of Spring is an extraordinary work, a powerful depiction of the sudden explosion of spring in his native Russia. Shrill brass and pounding percussion alternate with gentle flutes to portray nature at its most indomitable and people’s ancestral ways of living with it, including fertility rites and human sacrifice.

Premiered in 1913, it remains entirely modern and affecting; and over more than a century it has provided inspiration to many choreographers, but none, perhaps, has penetrated its elemental essence like the late, great, German Pina Bausch.

Her Rite of Spring is danced on a stage covered in peat, the dancers split into distinctive male and female groups both of which embody the score’s driving force but in contrasting ways.

Pina Bausch’s legacy is now administered by a Foundation which is strict on to whom it grants permission to perform the choreographer’s works, so, it was a major coup for Sadler’s Wells and Senegal’s École des Sables to be able to engage in a partnership with the Foundation for this exciting project.

Delayed by Covid, this rendition of Bausch’s The Rite of Spring has finally embarked on an international tour which will take it from Senegal, in west Africa, where it all began, to three continents.

Two dozen dancers picked from among the best Africa has to offer, make this work very much their own, and it’s all the better for it.

It starts with the peat-covered stage plunged in darkness; only a narrow shaft of light illuminates a female figure lying immobile on a piece of red cloth. 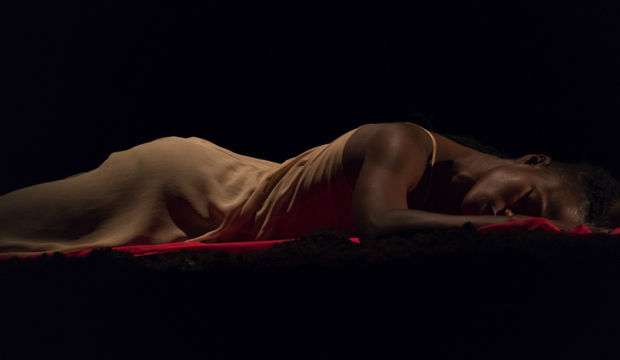 The Rite of Spring. Photo: Maarten van den Abeele
Gradually other women run in: nervy, fearful, their every move full of premonition. They are desperately vulnerable in their flimsy cream shifts, which will gradually become earth-stained. They come together and break apart, as if seeking solace and protection in one another, and yet knowing there’s no escaping what is to come.

When the bare-chested men enter, a ripple of fear runs through the women. The men are raw nature: powerful, implacable, dominant. 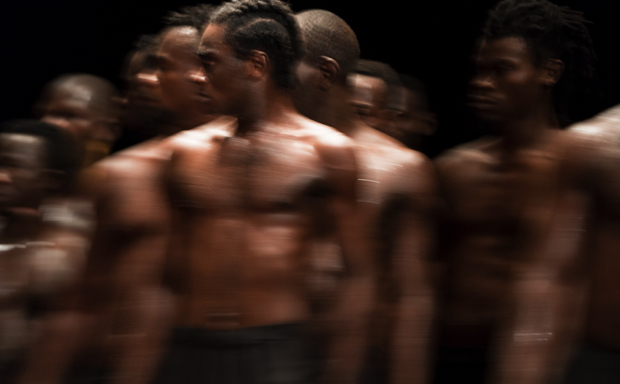 The Rite of Spring. Photo: Maarten van den Abeele
The two groups come together in a prolonged and ferocious fertility rite, their couplings vital and irrepressible.
And then it's time for the human sacrifice. The red cloth we saw earlier on is passed from woman to woman under the gaze of the leading man. He decides which woman should wear it and become The Chosen Maiden, and she will then dance until death. 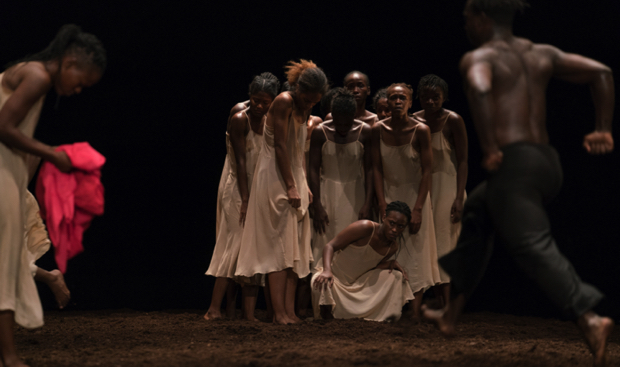 The Rite of Spring. Photo: Maarten van den Abbele
The Rite of Spring is very much a collective work, but the dance of The Chosen Maiden is key. Always a tour de force, in Pina Bausch's The Rite of Spring it is doubly so. On press night at Sadler's Wells it was breathtakingly performed by Anique Ayiboe, whose frenzied anguished dancing fully conveyed the indomitable savagery of nature and primitive man’s attempts to subdue it.

If you're unable to get to Sadler's Wells, a film of the final rehearsal of The Rite of Spring on a beach in Senegal prior to Covid , Dancing at Dusk, is available free of charge on Sadler’s Wells Digital stage from Thursday 9 June to Saturday 9 July.