Phoenix Dance Theatre celebrates a landmark anniversary with 40 Years of Phoenix, a lively programme of repertoire highlights at the Peacock Theatre

Harmonica Breakdown, a 1938 defiant solo by the American choreographer Jane Dudley, was danced by the superlative Yuma Sylla, who cogently conveyed its commentary on the role of women in society in the 1920s and 30s, and in particular the African-American experience.

We first saw her bent forward, in a pose that seemed to indicate a much-put-upon woman. Yet, when she started to dance she was like a spring suddenly uncoiled, energy coursing through her every jagged movement, every jump: arms seeming to come unchained, she paced the stage as if to conquer forbidden territory.

Harmonica Breakdown was a breathtaking three minutes, of its time, yet speaking directly to the 21st century.

In contrast, Pave Up Paradise is a whimsical, humorous piece by Ben Duke and Raquel Meseguer, which in typical fashion reinterprets the story of Adam and Eve and the original sin.

With guitarist Andrew Burke on stage, Shawn Willis and Yuma Sylla are Adam and Eve, bringing us the universal story of man meets woman through the use of text and movement. The text, telling how Adam ignores all God’s injunctions once he sees Eve, is repeated between duets of very physical dance; the final twist on the words hitting home like the sharpest of arrows as the pair stand side by side and face us.

The first piece in the programme, Henri Oguike’s Signal, is danced predominantly to the heavy thrum of Japanese taiko drumming. 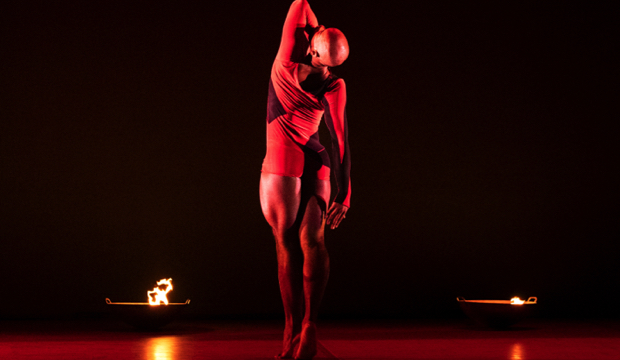 Phoenix Dance Theatre, Signal. Photo: Foteini Christofilopoulou
With the stage bathed in red, and five dancers performing syncopated movements, with long extensions and powerful jumps, it is interesting at first, but the longer it goes on the weaker is its impact.

Family, a fast-moving, comical piece looking at family dynamics from the divergent points of view of male and female choreographers – Danial Shapiro and Joanie Smith – is vaguely amusing, but doesn't bring much by way of choreographic invention or variety.

The final piece is the strongest. Entitled Heart of Chaos and repurposed from its 1990s original by the choreographer, Dashan Singh Bhuller, it is based on the African-American boxer Jack Johnson, known as the ‘Galveston Giant’, who became heavyweight champion of the world in 1908. 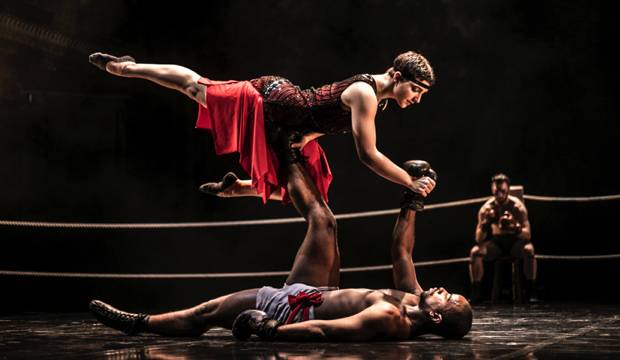 Heart of Chaos, Phoenix Dance Theatre. Photo: © dancephotographeruk
Set within two sides of a boxing ring, this is an impressionistic take on episodes of Johnson’s life, with Aaron Chaplin impressive as the boxer who defied all social norms, including marrying three white women at a time of segregation. Set to a jazz score, it portrays fights in both realistic and stylised manners, as well as concentrating on Johnson's tempestuous relationship with one particular woman.

40 Years of Phoenix is the result of current artistic director, Dane Hurst's trawl through the company's archives. But in a programme note, he promises 'amazing new work' in years to come. We look forward to that.