The American choreographer William Forsythe is justly acclaimed on both sides of the Atlantic for the way in which over his long career he has deconstructed classical ballet and re-assembled its constituent parts in ways that throw exciting new light on the art form.

And so it is with the two pieces that make up ENB’s new programme: Blake Works I and Playlist (EP). Neither is new: the former was created for Paris Opera Ballet in 2016 and has since been danced by other companies; Playlist (EP) expands a work Forsythe created for ENB’s men in 2018. Both remain, however, entirely fresh.

Set to a musical score that ranges from Barry White to Peven Everett, selected by Forsythe, who’s also credited for stage and costume design, Playlist (EP) is a boisterous, athletic, feel-good work. Originally an all-male piece, it now includes female dancers; and what it thereby loses in the power of undiluted testosterone, it gains in grace and colour.

The steps are impeccably classical; the energy coursing through the work entirely contemporary. Waves of dancers succeed each other creating intricate patterns, and while the sections where the men show off to each other in displays of virtuosic jumping and turning – Joseph Caley and Jeffrey Cirio particularly breathtaking – prove particularly rousing, the less competitive sections for the women are equally exciting.

Sandwiched between two ensemble numbers is a playful duet for Precious Adams and James Streeter, a momentary breather from the riot of colour and movement that went before, but as enthralling. 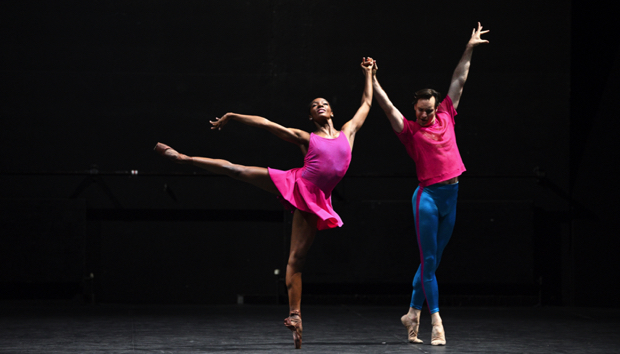 English National Ballet, Precious Adams and James Streeter in Playlist (EP) by William Forsythe. Photo: © Laurent Liotardo
Playlist (EP) ends with everybody on stage jamming to Natalie Cole’s This Will Be (an Everlasting Love). The dancers clearly loved it. The audience, predictably, went wild. Forsythe himself put on a brief appearance for a curtain call.

Blake Works I, which opens the programme, is different yet in many ways very similar. Set to seven songs from James Blake’s album The Colour in Anything it makes plentiful use of Forsythe’s genius for creating interesting, fleeting groupings of dancers, and it, too, relies to a large extent on the men’s athleticism. 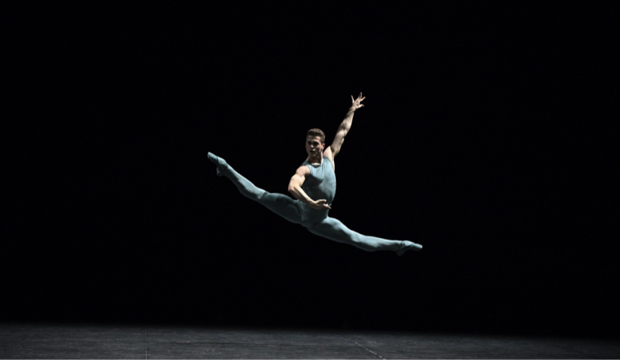 English National Ballet's Rhys Antoni Yeomans in Blake Works I by William Forsythe. Photo: © Laurent Liotardo
Its signature is a recurring last-minute distortion of classical movement: so, for example, a perfect fifth position with arms rounded above the head, suddenly breaks when a wrist flops and the hand turns outward, as the dancer throws a knowing glance towards the audience.

Despite its fast-moving exuberance, there is a meditative tone to Blake Works I, responding to the poetic introspection of James Blake’s music and lyrics.

Emma Hawes, tall and elegant with fluid movement and pure lines, brought the piece to a gentle end in her pas de deux with fellow principal Actor Arrieta to Blake’s haunting f.o.r.e.v.e.r

The Forsythe Evening is the perfect showcase for a company in fantastic form. It should not be missed.

The Colour in Anything