Mark Bruce talks to Culture Whisper about his unique take on dance theatre, as the Mark Bruce Company prepares to bring his Phantoms triple bill to Wilton’s Music Hall 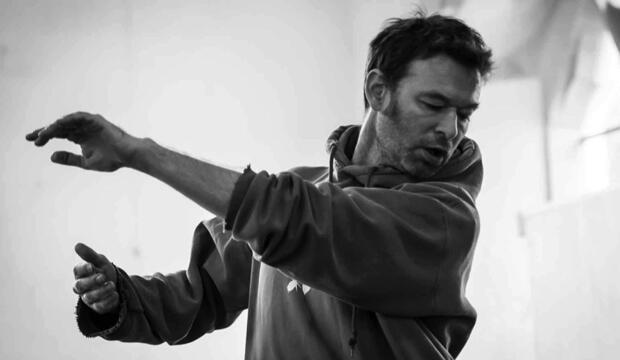 Mark Bruce in Rehearsal. Photo: Nicole Guarino
Mark Bruce is a man of many talents: dancer, choreographer, theatre director, musician… As we talk to him at his base in Frome, Somerset via WhatsApp video from London, a guitar is prominently displayed beside him, as if to assert its right to equal billing.

He is a man with a dizzying range of interests, and so the conversation flows easily between dance, cinema, music, film and script editing… you name it, distinct topics and processes threaded together in his thoughts as they then become in his work.

Our starting point, though, is his new triple bill, Phantoms, which is touring the country prior to arriving in London for a brief residency at Wilton’s Music Hall. 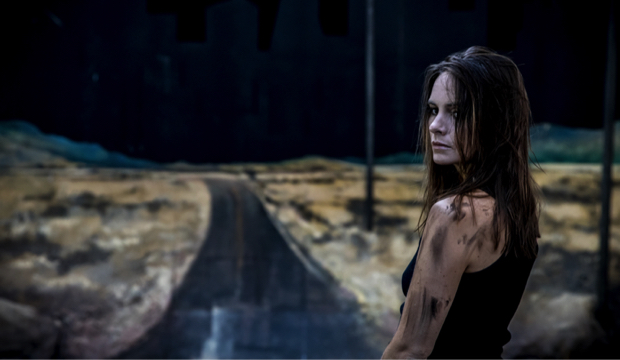 Mark Bruce Company in Phantoms featuring Eleanor Duval by Mark Bruce
The programme is named after its centrepiece, Phantoms, a surreal work with a non-linear narrative, described by Bruce as ‘an exploration’ which he himself is still trying fully to discover.

‘With all these types of pieces that I make it all comes from dreams, the subconscious. I wanted to make something that was visually very cinematic, and create environments that are very much reflections of states of being and create a world that these characters would inhabit and journey through.

‘They would meet their phantoms and try and find some universal truths and also recurring problems that we have as human beings, finding modern equivalents of destructive traits we have, as we move around in these savage circles. But as always with my work I’m trying to find hope within it and confirmation that the human spirit somehow manages to continue, despite all the things it has to face.’

Unsurprisingly, then, Mark Bruce counts Greek tragedy among his many influences. He tackled Greek myth with his exhilarating 2016 take on The Odyssey. 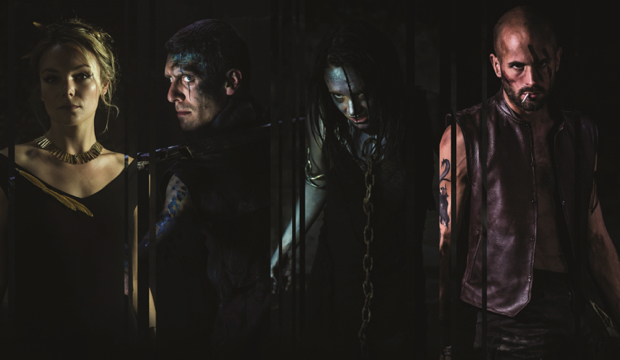 Mark Bruce Company in The Odyssey. Photo: Nicole Guarino
More broadly, though, ‘I often I find that I’ll write something and then find, this is just like The Bacchae. There are fundamental things that will just not leave us alone, especially dealing with death, but I like to stylise them in a way that I hope they have some kind of beauty.’

The greatest influence on Mark Bruce’s work, though, is cinema. He describes his imagination as ‘very cinematic’ and shaped to a large extent by American films.

‘I’m very influenced by David Lynch, although I discovered Lynch after I was already working like that; but he was so informative and far ahead of me in what he was doing that I think it almost gave me more permission to make work that doesn't hand everything to you on a plate. I think that dance-theatre has so much more scope to do that.’

Beyond American culture in general – he names writers such as John Steinbeck, William Burroughs, Jack Kerouac – one of Mark Bruce’s central influences is David Bowie.

‘I was truly devastated by his death. He continues to have an influence on me from when I was a teenager – his mixing of genres, the way that you can take different sources and kind of cut them up, put them together in different ways and create something that triggers our subconscious.’

Guitarists figure prominently among the other musicians that inspire Mark Bruce. ‘In writing the music for Phantoms I was listening to a lot of Mark Ribot’s music recently. He works with Tom Waits and is an incredible guitar player.’

Mark Bruce’s dance theatre demands a special kind of dancer. His small company of five is anchored by two extraordinary artists, who have been central to his work for a long time: Jonathan Goddard and Eleanor Duval. 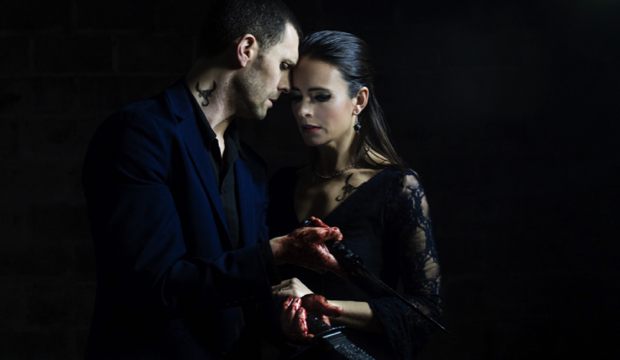 Mark Bruce Company in Macbeth featuring Jonathan Goddard and Eleanor Duval. Photo: Nicole Guarino
‘Jonathan and Eleanor just have this stage presence and this ability to hold you; they can tell you a whole story with their eyes. I feel like all the dancers in the company have that. It’s character acting, but also an understanding of detail and phrasing and how you can communicate that, and how your character dances that material, tells you a story.

‘They’re all so intelligent, and they need a combination of techniques as well, because my work does require a certain level of classical technique, combined with contemporary techniques and a strong sense of discipline to continue working to find its full potential.

‘And the thing about Jon and Eleanor is, I look at them and I have ideas, they swim around in my subconscious, characters they can play, so I say, do you want to do it?’

The remaining two works in the Phantoms bill are Green Apples and Folk Tale. 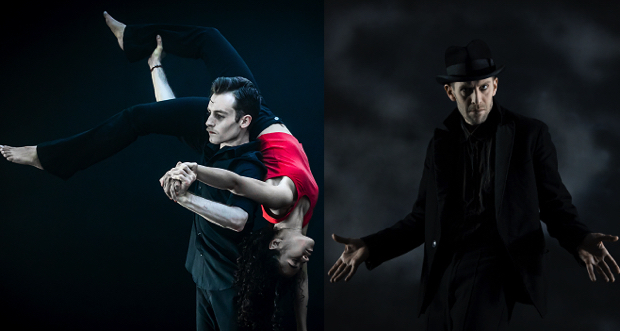 Green Apples (left) and Folk Tale (right). Photos: Nicole Guarino
‘Green Apples was first made in 2006. It’s made to music by the White Stripes. It was a very popular piece, we used to perform it more in the round within a rope, and it’s very physical and raw like the fantastic music of the White Stripes.'

Folk Tale, set to music by Martin Simpson has been in the works for a long time – Mark Bruce started choreographing it when he was a dance student at Rambert School. It has now come together as a collection of seven pieces.

‘Some are ballads, and some are just instrumentals, and it’s meant to capture the intricate detailed nature of Martin Simpson’s work and the techniques involved. With his right-hand technique he uses a lot of influences, like banjo, and it includes percussion, rhythm; so I’ve enjoyed just trying to harness, replicate that in a sense.’

Mark Bruce’s work sits particularly well in Wilton’s Music Hall. ‘My work has a lot of tradition in it, there’s no digital effects or anything – it’s all old-fashioned smoke and mirrors. Growing up on tour with Rambert in the 1970s, seeing Lindsay Kemp’s work and that old-fashioned sideshow touring thing – you go into Wilton’s Music Hall, it is that world, and as soon as I walked in it felt like home. I really like the audience there as well, because it’s a really diverse audience.’

Finally, I wondered what advice he would give to people who may be tempted by Phantoms, but have never seen a Mark Bruce work before. ‘You have to invest your own imagination. You can look for a narrative but you don’t have to follow a narrative. And I also hope that they get an arresting experience, sound and vision and dancing, beautiful characters, frightening characters, surprises, metaphors and all sorts of things.’